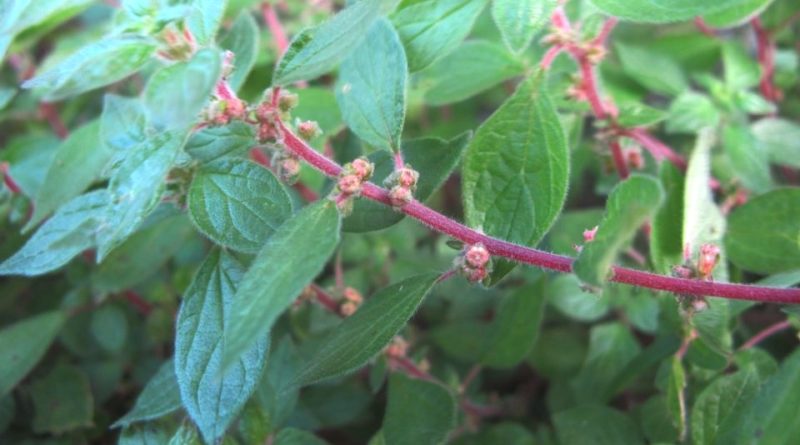 The pellitory-of-the-wall (Parietaria judaica, L. 1753) is a herbaceous species belonging to the Urticaceae family.

Systematic –
From a systematic point of view it belongs to the Eukaryota Domain, the Plantae Kingdom, the Magnoliophyta Division, the Magnoliopsida Class, the Urticales Order, the Urticaceae Family and therefore to the Parietary Genus and to the P. judaica Species.
The terms are synonymous:
– Parietaria diffuse M. et K., 1823;
– Parietaria ramiflora Moench, 1794.

Etymology –
The term Parietaria comes from páries, paríetis muro: for the growth environment near or on walls and walls.
The specific judaica epithet comes from Judaea Giudea, southern portion of Palestine: Jew, from Judea.

Geographical Distribution and Habitat –
The pellitory-of-the-wall is a plant with a diffusion area centered on the Mediterranean coasts, but with extensions to the north and east, which corresponds to the area of ​​the vine.
Its habitat of limestone cliffs, old walls, ruins, along roads and paths, disturbed environments, and in general the arid places where it grows in the altitude range between 0 and 1000 meters above sea level. 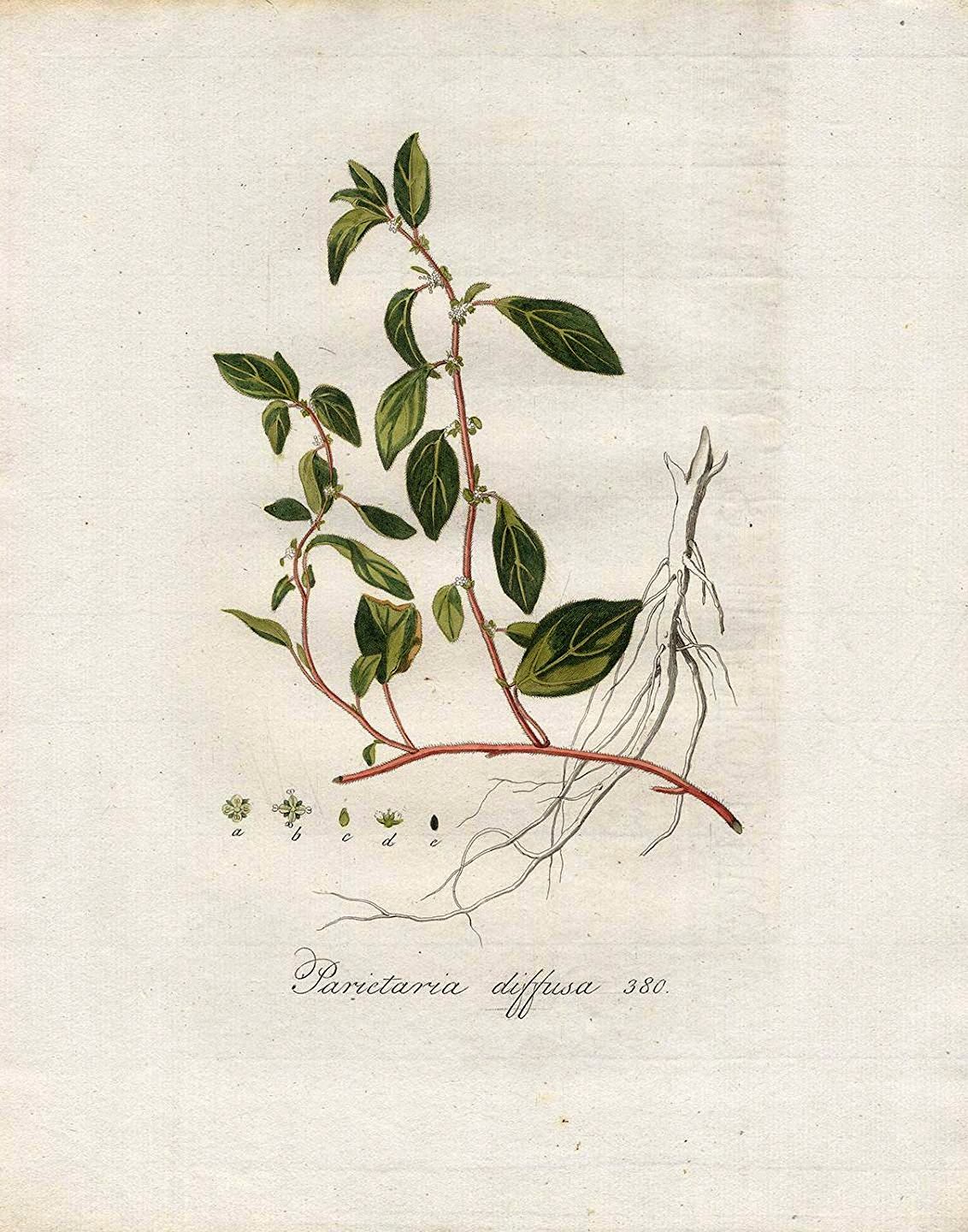 Description –
Parietaria judaica is a plant characterized by hairy stems of pink or red color, woody at the base that can reach an average height of 60 centimeters.
The leaves are hairy, alternating, simple, whole and green, with smooth margins.
The flowers are small white or pink and are attached to the stems, they are bisexual or unisexual, produced in groups of three to many together in the axils of the leaves.
The nickname of sticky grass is due to the adherent quality of the flowers and hairy stems; unlike some related species of the Urticaceae family, the hairs do not sting.
The flowering period runs from spring to autumn, when it produces large quantities of pollen.
The simple and indehiscent fruit is a diclesium, with dry achene-like, ovoid pericarp, black, bright, 1-1.3 mm, covered with persistent perianth.

Cultivation –
The pellitory-of-the-wall, like other Parietarie, is a plant that prefers nitrogen-rich soils, so in areas with high use of nitrogen fertilizers it can become invasive. However, it is a spontaneous plant that is not cultivated but collected for various uses, some of which are connected to local uses.

Uses and Traditions –
The Parietaria judaica, known by the names of Parietaria giudaica, Vetriola minor or Muraiola, parietaria, is a plant whose flowering period is very long, which lasts from March to September. The plant is characterized by an emission of large quantities of pollen.
The pollen of pellitory-of-the-wall is very small, therefore easily transported by air currents and able to penetrate the airways even in depth. Furthermore, particularly in southern Italy, pollen which, as mentioned, is present for a very long period, entails a high degree of exposure. Pollen dispersion is favored by a click system of the filaments.
The Parietaria judaica is a species rich in saponins and like all parietaria it contains calcium, potassium salts, mucilages, sulphured substances, tannins and was already known since ancient times for its diuretic and purifying properties. In fact, it has a high content of potassium salts, especially nitrate, and flavonoids which are responsible for the effects that determine the elimination of water through the kidney and also help to eliminate kidney and bladder stones.
In some places this plant was widely used in the cleaning of glass bottles: above all, a good amount of parietaria and lukewarm water was inserted into the container to be cleaned, then everything had to be shaken vigorously. In this way the leathery plant was abrasive for the incrustations and, at the same time, it freed saponins which formed a natural foam useful to remove the peeling dirt.
Some elders report that in the past they have eaten, in times of famine, soups made with boiled parietaria, remembering that this food was neither tasty nor healthy.
Others report having played with the leaves of the parietaria: taking advantage of the small curved hairs that cover the plant, they were able to attach the leaves to the clothes thus creating ornamental figures such as flowers and stars on the fabric.
Another characteristic use is linked to the alleged soothing property of this plant due to the irritations caused by the sting of nettles. To obtain the beneficial effect, according to a local tradition, a large tuft of parietaria was rubbed on the injured part and repeated the following propitiatory formula several times: “vardaije, vardaijella, take the lardìchella away”.
The parts used of this plant are: the tender tops, cooked in soups.
The collection period runs from January to December.

Preparation method –
In popular usage, the whole plant is harvested before flowering, after the young tops are picked, the boiled leaves are commonly consumed like spinach and to prepare fillings, omelettes and soups often combined with nettle.
In addition, the presence of flavonoids contributes to the elimination of water through the renal system which also helps to eliminate kidney and bladder stones.