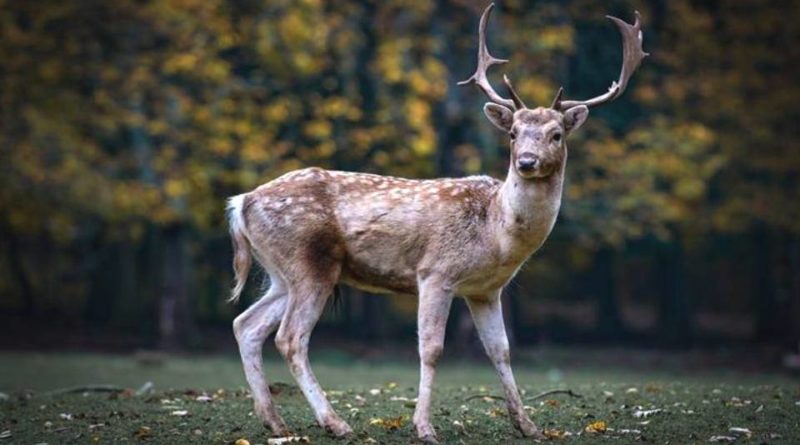 The European roe deer (Capreolus capreolus, Linnaeus, 1758) is a hoofed mammal belonging to the Cervidae family.

Geographical Distribution and Habitat –
Roe deer is a species that lives in Europe and Asia. In Europe it is distributed largely in the continental part and in Great Britain, while it is absent in Ireland and in the Mediterranean islands.
In Italy it is present in the Alps and the Apennines.
Its habitat is that of open woods – where the undergrowth is dense – and interspersed with clearings and bushy areas, both in the plains, also where this is cultivated and also where agriculture is intensive, as long as you find bushes where you can take refuge. It is also found in the hills and mountains and in wetlands.
In the summer, it is present in alpine pastures in pastures up to 2400 m a.s.l., while in winter it tends to progressively drop in altitude with increasing snow thickness. It manages to overwinter even over 2000 m a.s.l. exploiting areas where snow is eroded by the wind or avalanches. It grazes normally even at temperatures below -20 ° C. 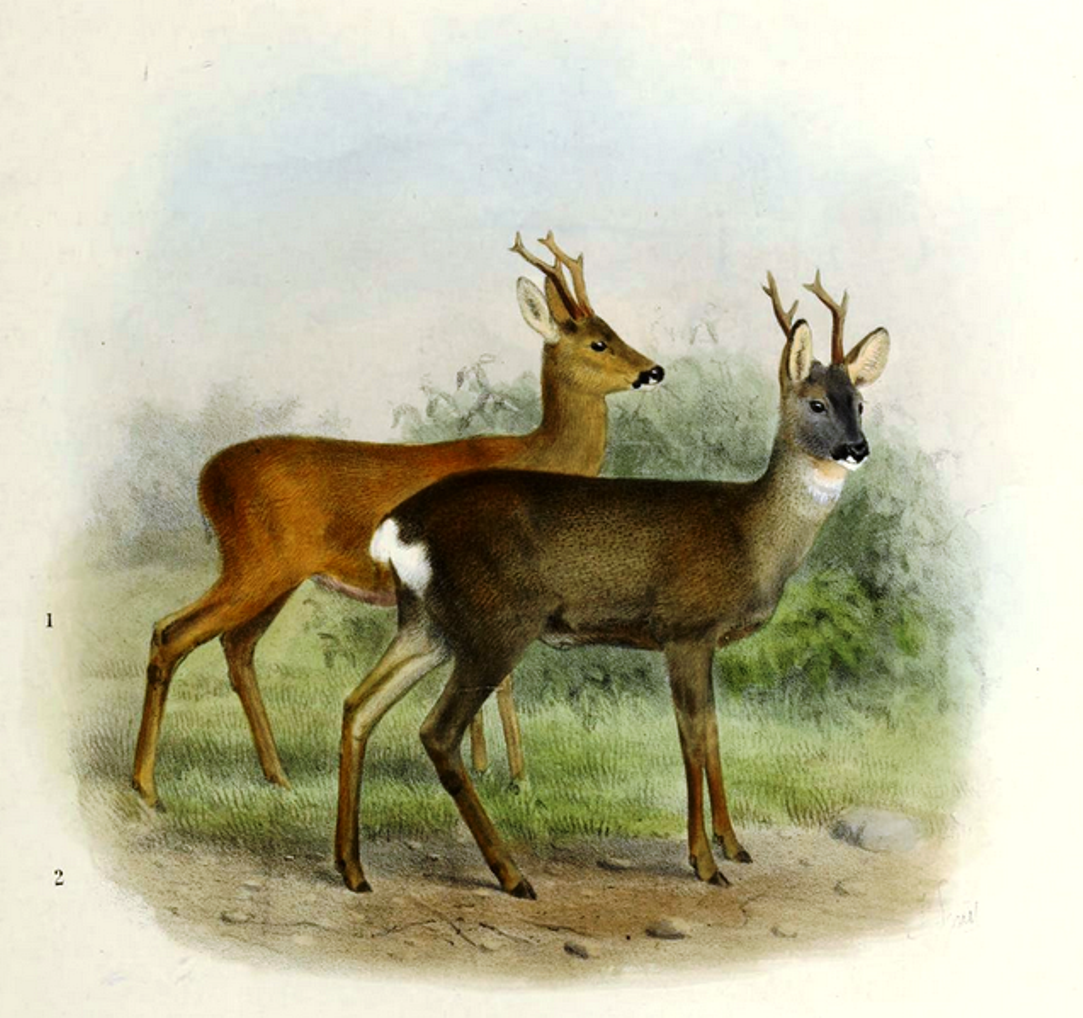 Description –
The roe deer is a small deer, between 90 and 130 cm long, with a shoulder height of 70-77 cm and with a weight that can vary between 20 and 35 kg and with sexual dimorphism, so much so that the female is smaller in size, with a weight ranging from 18 to 28 kg, height of 60 – 70 cm and length not more than 105 cm.
During the year, this cervid takes on two coats that alternate with two “mute”:
– an autumn – winter, typically gray-brown in color, which highlights the perianal area characterized by the presence of an area of ​​iridescent white hair called “mirror”, which is kidney-shaped in the male and heart-shaped or rounded in the female;
– a spring, with replacement of the winter coat with a bright orange-yellow coat.
The tail is very short, so much so that it does not emerge from the hair and in the female there is a tuft of cream-colored hair that covers the genital system, called “false tail”.
The adult male has small boxes, with three points; which fall every year, from October to December, and grow back at the end of winter. The stages are made up of bone tissue.
The three points from front to rear are called Ocular, Vertex and Stocco respectively.

Biology –
As regards the biological cycle and the reproduction of Capreolus capreolus, a mating period is observed from mid-July to late August, where the male performs a series of chases of the female.
After mating, the gestation lasts about nine and a half months; once fertilized, the egg is implanted in the maternal uterus and remains dormant until December, when it starts to develop again. This feature is called deferred egg implantation.
The females thus give birth in a period that goes from late spring to early summer, with a gestation length that varies in these two periods, and usually bring to light 1 or 2 small, rarely 3, with the characteristic thickly spotted brown coat and that after an hour I take my first steps. Most often, the females leave the puppy hidden in the tall grass, while they wander around in search of food; the spotted coat, with clear points, of the puppies, however, promotes mimicry.
Weaning lasts 3-4 months and sexual maturity occurs around 12-16 months.
With the arrival of autumn, then, males also gather in the herds of females and often occupy a place at the bottom of the hierarchy.
Young people reach sexual maturity at the age of about 14 months.
The roe deer can reach an age of 18.

Ecological role –
The roe deer is a mammal that in the past the roe deer was considered a solitary animal, although today it is known that it has a complex and articulated social behavior. In fact, while the males lead a solitary existence for most of the year (also because territorial disputes begin between them at the end of winter), the females often live in groups, made up of 3-7 individuals, direct by a dominant female. In these branches the hierarchies and social relationships are well defined and structured.
It is very fast and lives on highlands and mountains, although it was originally prevalent in the plains and is a very territorial animal.
The roe deer has numerous predators that threaten its safety and especially that of its young; the main ones include wolves, bears and lynxes, as well as foxes, wild cats, eagles, eagle owls, martens, jackals and wild boars. In addition, another threat is posed by poachers who operate in all seasons.
This animal has a diet that sees it eat several times a day (8 – 12 times) and in summer it also feeds at night, with a diet made of different herbs, bark, leaves, broad-leaved buds, conifers and fruits.
Once, in Italy, this animal lived practically on the whole peninsula, from the plains to the medium mountains, while currently we find it on the whole alpine arc and in greater consistency on the central / eastern Alps, on the whole Apennines from the Ligurian- Tosco-Emiliano up to the mountainous massif of Calabria, thanks also to the reintroductions made in the last thirty years.
Then during the twentieth century this species decreased considerably due to the excessive hunting and the strong deforestation of the plains, hills and mountains allowed by the first Italian forest law (L. 3917/1877). Fortunately, in the last decades of the twentieth century the species spontaneously recolonized the Alps and the northern Apennines, while in the central and southern Apennines it spread thanks to numerous reintroductions, especially in Parks, Reserves and State Forests. In addition, in the first decades of the 21st century there was a slow recolonization of the Po Valley woods, in particular those in the Ticino Park, but also in the recent reforestation carried out along the Po thanks to the contributions of the European Union.
In addition, some specimens of the typical subspecies have recently been included in the Nebrodi Park.
Capreolus capreolus, in 2010 had at least 15 million non-italicus adult heads in Europe, of which at least 460,000 in Italy, increasing and expanding. Instead, with regard to the Italicus subspecies of the central-southern Apennines, less than 10,000 specimens are estimated.
According to the IUCN, the status of this species, in the central-northern part of the country, is in an overall satisfactory state of conservation and progressively improving, even if there is no lack of local situations in which poor management tends to still maintain a very high population density lower than the potential ones or to prevent, through systematic poaching, the natural recolonization of the territories. In central-southern Italy, roe deer is in an extremely precarious state of conservation (Carnevali et al. 2009).
As regards the necessary conservation measures to be implemented, especially in central and southern Italy, the implementation of actions aimed on the one hand to safeguard the residual indigenous nuclei by promoting their expansion and on the other the development of reintroduction.