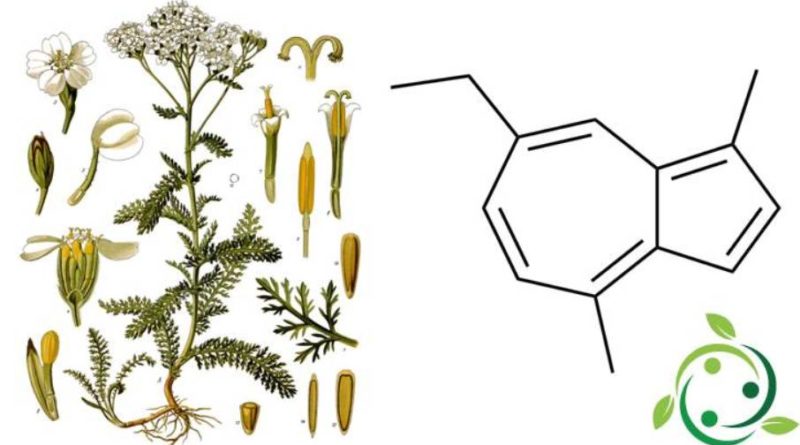 Camazulene, whose term in the IUPAC official nomenclature is. 7-ethyl-1,4-dimethylazulene is a molecule, belonging to the terpenes class, which has a brute or molecular formula: C14H16.
The camazulene an azulene, naturally present in some plants such as the common chamomile (Matricaria recutita L.), the Roman chamomile (Chamaemelum nobile) and other species of the genus Achillea such as the yarrow (Achillea millefolium) and other species and absinthe (Artemisia absinthium), etc ..
Camazulene has the typical structure of a cycloheptane fused to a cyclopentane with five unsaturations between the cyclic carbon atoms; moreover, as additional substituents, there are two methyls and one ethyl.

Camazulene has anti-inflammatory properties, as it is able to inhibit the synthesis of leukotriene B4 (a particular type of leukotriene involved in inflammatory processes); also in vivo and inhibits the enzyme CYP1A2 or 1A2, which is one of the members of the cytochrome P-450 family; a highly polymorphic liver enzyme responsible for the metabolism of about 5-10% of drugs currently in clinical use.