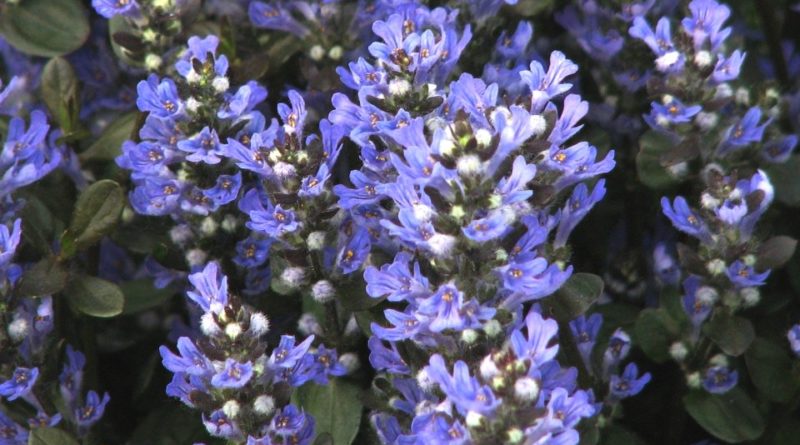 The Common Bugle (Ajuga reptans L., 1753) is a perennial herbaceous species belonging to the Lamiaceae family.

Etymology –
The term Ajuga comes from the Greek privative prefix α- a- and from jugum giogo: probable reference to the absence of the upper lip of the corolla. According to Pliny, the name could be the corruption of abigo expel, reference to the medicinal properties of the genus.
The specific epithet reptans comes from crawling on the ground: creeping, reptant.

Geographical Distribution and Habitat –
The Common Bugle is a Eurasian species found in a vast area of ​​the northern hemisphere that goes from Europe to Japan.
In Italy it is common throughout the territory up to the mountain belt, while it is less frequent in the South.
Its typical habitat is represented by fertile and fertilized meadows, being also along the hedges and edges of the paths, but also in the deciduous woods on preferably calcareous substrate but also siliceous with neutral pH, medium nutritional values ​​of the soil which must be moderately humid, in an altimetric zone which goes from sea level up to 1500 m asl. 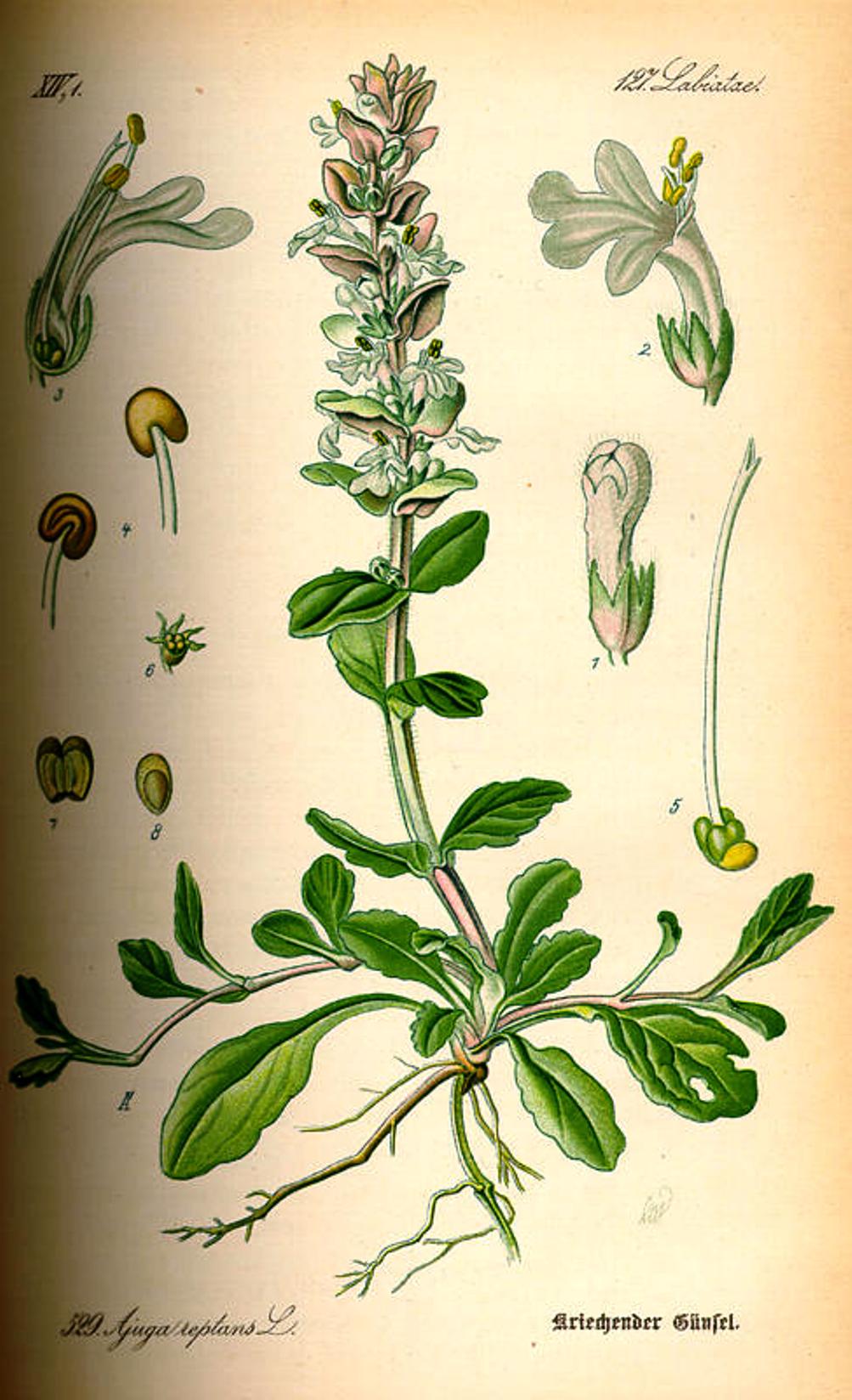 Description –
Ajuga reptans is a perennial, evergreen herbaceous plant in warmer climates, odorless with a creeping habit no more than 20 cm high.
The plant is densely hairy, with alternating hairiness on the faces of the erect flower stem, with long stolons of 10-30 cm rooted at the nodes at the base.
The leaves are of an intense green color, with basal spatulate, with long petiole; the smaller caulines, ovate and almost sessile.
The flowers are gathered in a dense inflorescence, about 1 cm large, with a blue-violet corolla veined with white, rarely white or pink and with stamens emerging from the tube.
The antesis is between January and March and pollination occurs through insects (entomogamous pollination) such as diptera, hymenoptera and rarely lepidoptera.
The fruit is a schizocarp (reticulated tetrachenium) made up of 4 nuculas and a rough surface.
The seeds are minute and provided with endosperm (sometimes scarce).

Cultivation –
The Common Bugle is a spontaneous plant that reproduces by seed, through fertilization that occurs basically, as mentioned above, through the pollination of flowers and through the production of stolons.
The seeds that form when falling on the ground are dispersed mainly by ants-like insects (myrmecoria dissemination.

Uses and Traditions –
Ajuga reptans, in Italy is known by various names, such as: bugola, common vat, San Lorenzo grass, comfrey.
This plant has the possibility of intraspecific fertilization, which for this species are the following:
– Ajuga × hybrida A. Kerner (1874) (hybrid between: A. reptans × Ajuga genevensis);
– Ajuga × pseudopyramidalis Schur (1853) (hybrid between: A. reptans × Ajuga pyramidalis).
The substances present in this plant have aromatic but also bitter characteristics, due to the presence of essential oils, tannins, saponins, and other substances, for which it is recommended to use in moderate quantities.
In fact, a particular warning must be used in its use as there is proven data that it is a hepatotoxic plant. Some components present in the plant (neoclerodanic diterpenes) can cause hepatitis of various types (liver parenchyma disorders such as chronic, acute but also fulminant hepatitis).
The parts used are mainly the leaves and in any case the aerial parts.
Among the healing properties, it is remembered that it is a plant known for its astringent, anti-inflammatory and vulnerable properties. It is used in homeopathy but also in cosmetics for delicate skin. It also has alleged abilities to stop bleeding.
From an aesthetic point of view these plants are used in gardening, thanks to the particular characteristic of the bearing (ground cover); this plant in fact quickly colonizes large areas of land, expanding underground, a property determined by its robust and long stolons.
The various gardening techniques have produced different cultivars with white and pink flowers or with variegated or spotted leaves, or bronzed, or speckled with red, yellow or brown.
From an ecological point of view, it is worth noting that Ajuga reptans is visited by some butterflies, including Boloria selene, Argynnis aglaja, Fabriciana adippe and Boloria euphrosyne, which feed on the nectar of its flowers.

Preparation method –
Common Bugle can be used in the kitchen where the parts used are tender leaves, raw in mixed salads or boiled in soups and minestrone.