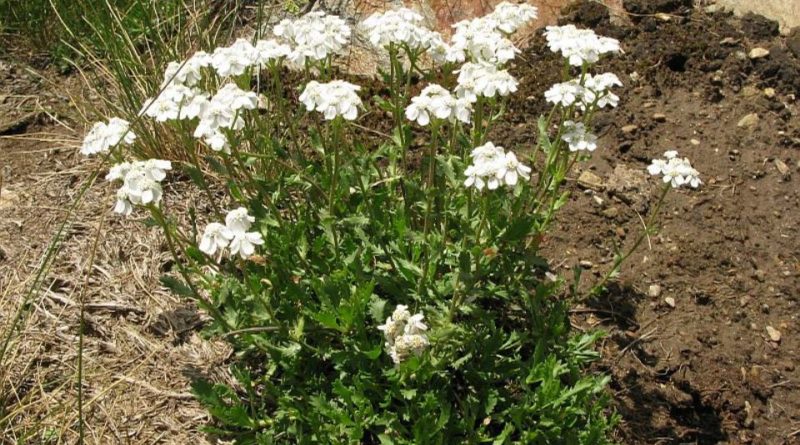 Leaved milfoil (Achillea herba-rotta All., 1773), is an aromatic herbaceous species belonging to the Asteraceae family.

Systematic –
From a systematic point of view it belongs to the Eukaryota Domain, Plantae Kingdom, Magnoliophyta Division, Magnoliopsida Class, Asteridae Subclass, Asterales Order, Asteraceae Family, Asteroideae Subfamily, Anthemideae Tribe, Achilleinae Sub-tribe and therefore to the Genus Achillea and to the species A. herba-rota.
The term Achillea morisiana Auct is synonymous.

Etymology –
The term Achillea of ​​the genus was dedicated to Achilles (in Greek Aχιλλειοϛ Achilleios), mythical Greek hero who would have used some species of this genus to heal the wounds suffered in battle by his soldiers; a very ancient remedy so that this is one of the medicinal herbs found in an Iraqi necropolis of the Neanderthal man dating back to 60,000 years ago. The name Achillea was already present in the Greek physician Galen’s De simplicium medicamentorum facultatibus (129-200 AD)
The specific herb-broken epithet comes from herba grass and rota wheel: round grass like a wheel: because of the round inflorescence.

Geographical Distribution and Habitat –
Leaved milfoil is a typical plant of the western alpine arc, except in Liguria, between Italy and France where it grows in rocky environments, on stony grounds and moraines, on soils rich in siliceous skeleton, from the subalpine belt to the alpine, between 2000 and 3000 m asl in stony areas and alpine pastures.
The regional distribution is restricted to very few stations on the north-western limit of the Carnic Alps. 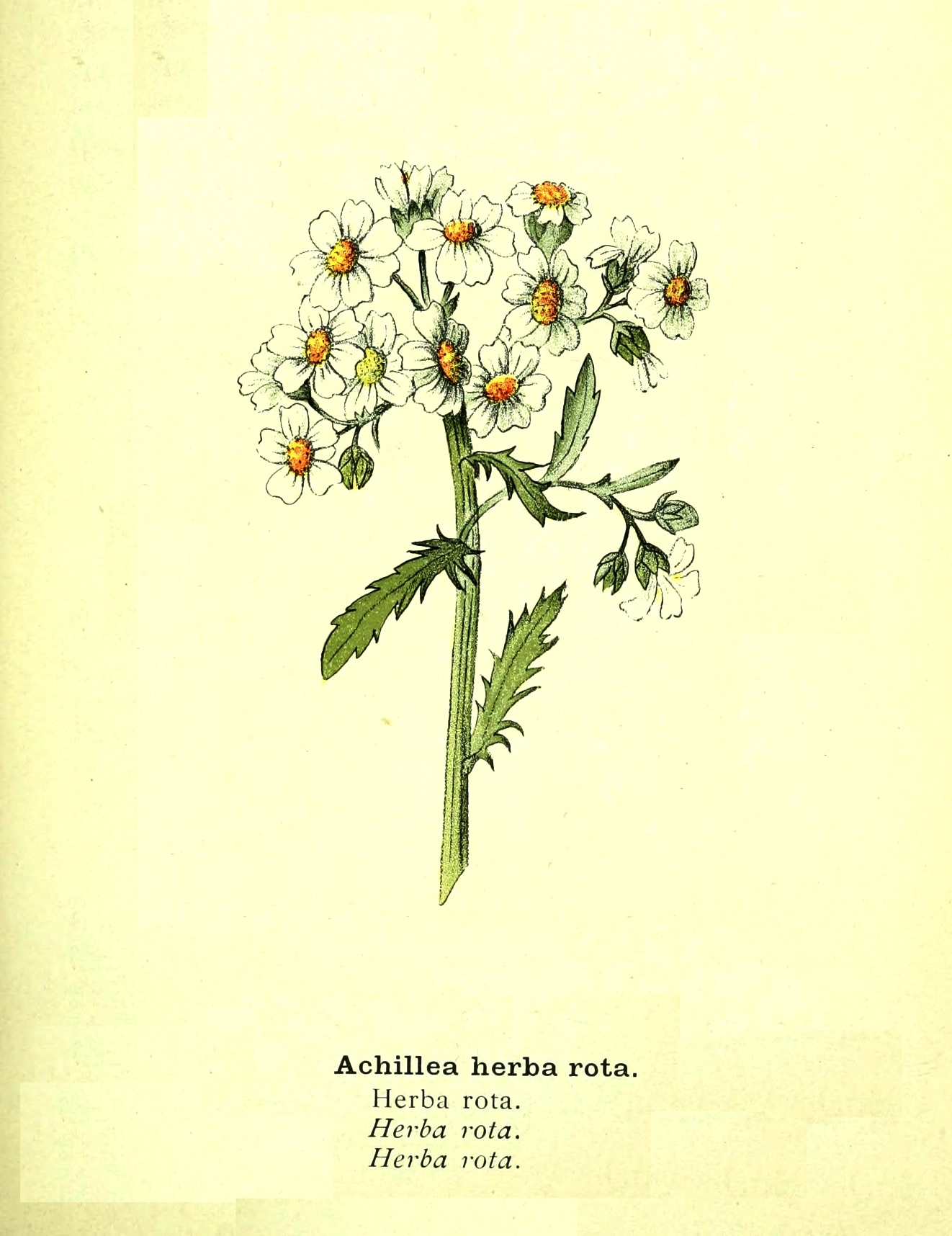 Description –
Leaved milfoil is a perennial herbaceous plant, with short scattered hairs, 12-18 cm high.
The stems are woody and creeping, with sterile jets and erect flowering branches.
The primary root is rhizome.
The leaves of the sterile jets are oblanceolate-spatulate, 5-7 mm wide and 26-30 mm long, with 4-7 teeth on each side in the apical half and with rounded apex and with undivided portion at least 3 times wider than the incisions; the cauline leaves are alternate, sessile, progressively linear, 2-3 mm wide and up to 22 mm long, indented all around.
The flowers are gathered in a corymb made up of many flower heads; the envelope of the flower head is hemispherical with a diameter of 3-5 mm, subglabrous scales, with a dark, short, 0.2 mm wide cartilaginous margin, notched only towards the apex; hermaphrodite flowers and pentamers; central tubular whitish flowers; 6-12 ligulate flowers, rounded at the apex, longer than the envelope; 5 stamens; stylus with bifid stigma; 2 unilocular inferior ovary carpels.
The flowering period is between July and August.
The fruit is an oblong achene (cipsella), about 2 mm, compressed and flattened, without a pappus.
However, this species is somewhat polymorphic, with physical characteristics that vary according to the variety.

Cultivation –
Achillea herba-rotta is a plant that grows spontaneously and, among other things, in a somewhat restricted area on soils rich in siliceous skeleton and at an altitude between 2000 and 2800-3000 meters on average. However, it is possible to reproduce it, also starting from seed, respecting its soil and thermo-rainfall needs, typical of its areas of origin.

Uses and Traditions –
The Achillea herba-rotta, as mentioned, is a polymorphic species that is divided into two subspecies.
Among the similar species it differs from Achillea grass-broken subsp. moschata (Wulfen) I. Richardson, as the latter has leaves of sterile pinnate jets with lacinias as wide as the undivided part and lower cauline leaves embracing the stem; partially shares its growth area in the Aosta Valley and northern Piedmont.
It also has some similarities with other small-sized species such as Achillea rupestris Huter, Porta & Rigo. The latter, however, has leaves of sterile, linear, spatulate, acute, whole jets, with no teeth on the edge; it is also present only in the Pollino Massif.
Achillea herba-rota was once subjected, due to its aromatic characteristics, to an indiscriminate harvest, which has decreased in recent times.
Due to the presence of ethereal oils and other active ingredients, it is still used today in folk medicine. The main constituents are an essential oil containing camazulene, camphor, beta-pinene, cineol, borneol, caryophyllene; sesquiterpene lactones, the achillein bitter principle, flavonoids, caffeic and salicylic acid, tannins, betaine.
The medicinal properties of this plant, as of other similar species, have been ascertained for centuries; the leaves and the flowering tops have a bitter, diuretic and antihemorrhoidal tonic action. Instead, vulnerable uses have been questioned, because it appears to delay scarring rather than speed it up.
Together with Achillea millefolium and Achillea nana it is among the main components of almost all recipes for aperitifs, bitters and herbal liqueurs. Almost all dried Achilles are used for the preparation of a soothing and purifying tea.
So also the herb-rota yarrow has aromatic, aperitif and digestive, cholagogic, antispasmodic, expectorant, antiseborrheic, astringent, sedative properties.
The flowering tops and the whole plant are used for this plant.
In ancient times, as early as Linnaeus, Achillea species were highly regarded for their medicinal properties. The juices of these plants were used by mountaineers against fissures, variceal ulcerations and hemorrhoids. For external use it was used for redness, skin inflammation and as a scar. In the Ligurian Alps, in the Cuneo area, this plant was so abundant that, at the time of flowering, the farmers went up to the mountains with scythes for its collection.
In recent times, its use has been considerably restricted to the preparation of liqueurs, decoctions and infusions with tonic action.

Preparation method –
Of the Achillea herba-rotta, like the other Achilles, the flowering tops and the whole plant are used.
Infusions and herbal teas are prepared for this plant for healing and tonic purposes, while this use has been narrowing in recent times to the preparation of liqueurs.
As for the specification of properties and preparations, see the following sheet.