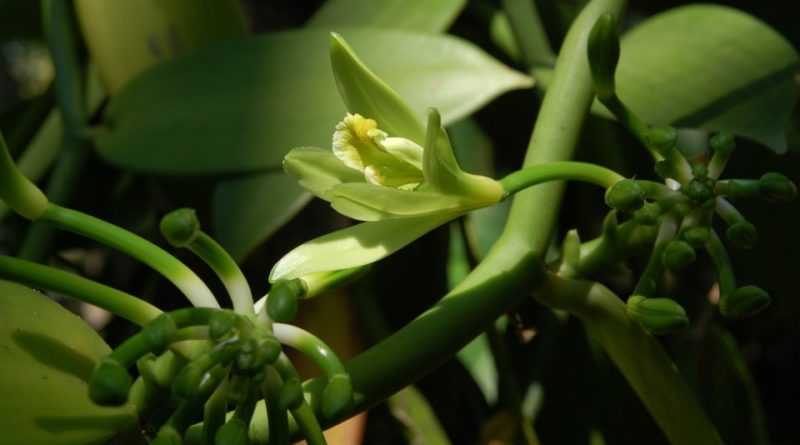 Geographical Distribution and Habitat –
Vanilla is an orchid native to the humid tropical forests of the east coast of Mexico.
The cultivation of this plant, for the production of the spice, has contributed to its spread in most of the humid tropical regions of the world.
Its natural habitat is that of the Mexican tropical undergrowth. 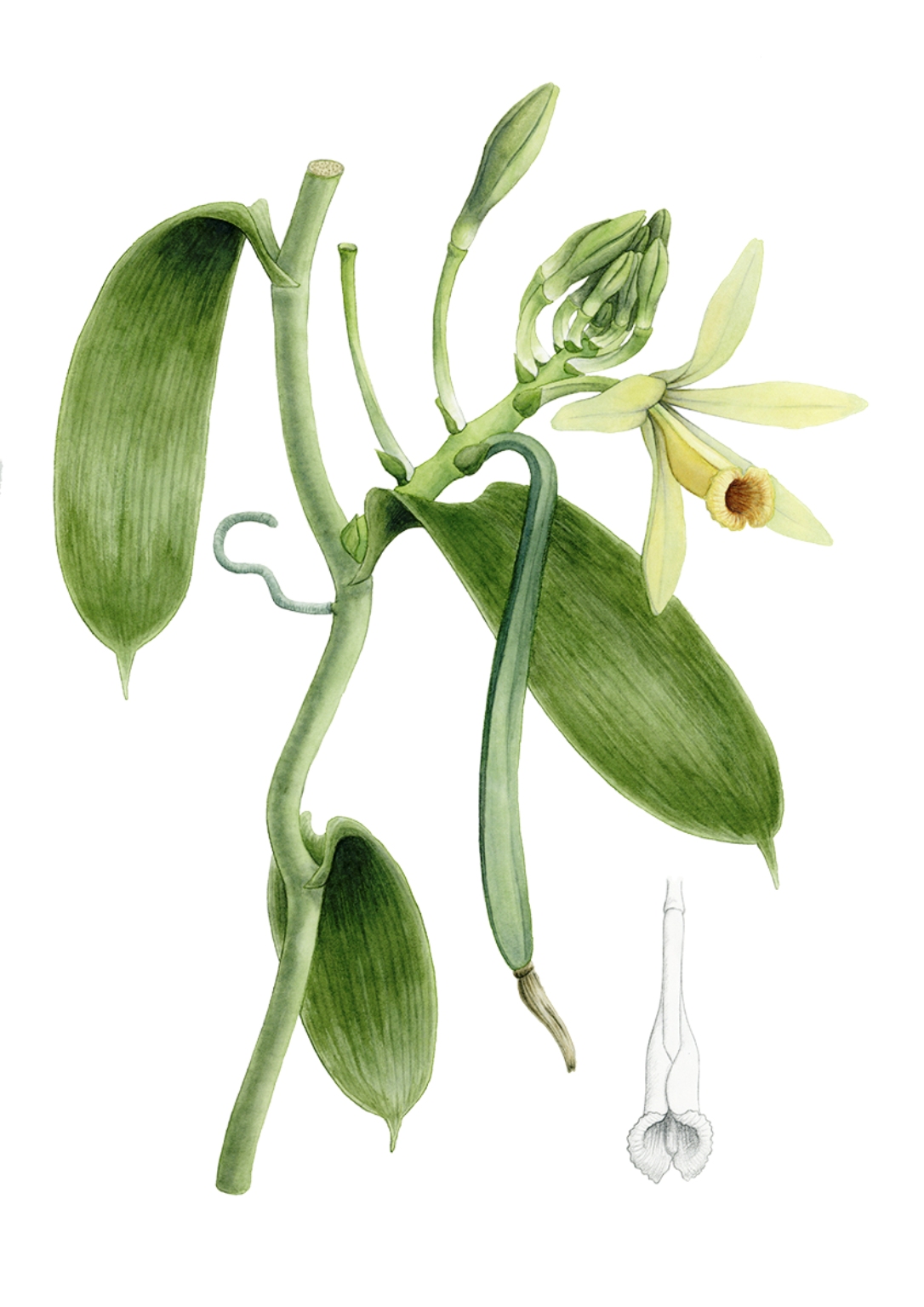 Description –
Vanilla planifolia is an epiphytic orchid that climbs larger plants thanks to its adventitious roots, even for more than ten meters.
The plant has cylindrical and leathery stems with little branching which, like very long flexible lianas, which develop vertically.
The leaves are arranged in an opposite way along the branches, elliptical in shape, flat, about 10 cm wide and bright and shiny green. When the leaves break, they release an irritating sap to the skin.
In the vicinity of the hanging of the leaves there are often aerial roots that allow the plant to fix itself to the support and, if necessary, to produce roots.
The orchidaceous flowers, gathered in groups of 8-10, are fragrant and white or yellow-green in color; they have a short duration, as they open in the morning and after a few hours they close to never open again.
Flowering occurs between September and January, depending on the growing area and generally lasts about a month.
Vanilla planifolia begins to bloom only when its liana has reached 3 meters in height.
The fruits that originate from the fertilization of the ovary are green, odorless pods, about 20 cm long and inside they contain thousands of tiny seeds that are released by the explosion of ripe fruits and disseminated in the undergrowth.

Cultivation –
Vanilla is a plant that in order to be cultivated needs a warm and humid climate and an anchoring support and a certain shade. Three cultivation techniques are mainly used, from the most extensive to the most intensive:
– in the undergrowth, tree trunks are used as support;
– it is cultivated in catch crops, for example together with sugar canes;
– lastly it is also grown in a greenhouse.
The growers practice pruning, check (or practice) the fixing of the stems, and in particular fold the vines so that the pods are at the correct height (one and a half meters) for easy collection.
For the details of the cultivation technique, see the following sheet.
As regards world production, the relatively small vanilla market aims to satisfy a demand linked to natural authenticity, is subject to climatic risks and financial speculation. Cyclones that frequently hit the eastern part of Madagascar can actually destroy an important part of plants or crops. But prepared vanilla can be stored for many years, so producers, wholesalers and traders can build stocks to cushion price changes or, on the other hand, to take advantage of these changes. According to some estimates, production is around 12,000 tons.
The cultivation areas are located in different humid tropical regions of the world, among which the two main ones, which are Madagascar and Indonesia, represent the world’s largest suppliers.
The products obtained in the south-east area of ​​the Indian ocean are called Vanilla Bourbon (Madagascar, Comoros Islands and Reunion).
In addition, there are some countries that have launched, or relaunched in the production of vanilla: among these we mention Uganda, the state of Kerala in India, Papua New Guinea, the Tonga Islands, etc. In addition, China produces vanilla in the Yunnan province.
As for the varieties, the long Bourbon vanilla pods on the island of Reunion are of superior quality. The transformation technique of Bourbon vanilla is very complex; in order to avoid the loss of essential oil, long experience is required from the manufacturer. Bourbon vanilla goes perfectly with cinnamon, anise, clove, ginger and cardamom.
The Tahiti vanilla pod is dark brown, very fleshy and thick. (The best 15–18 cm long). The scent of Tahiti vanilla is delicate and warm, sweetened like a spice pan, at the same time developing a fruity note with plum. The price of Tahiti vanilla is very high, due to a very limited world production (15 t per year).
The vanilla pod Tahitensis is dark brown, fleshy and thick. the best ones are 18–19 cm long. The scent of Tahitensis vanilla is spicy, warm, with a hint of anise. Tahitensis vanilla produced in Papua New Guinea is considered among the best vanilla in the world.
To be marketable, vanilla beans must be at least 15 centimeters long. The most beautiful fruits, called vanille ménagère (homemade vanilla) are intended for retail sale and must not be broken, have scars or be too dry. A quality pod must be able to be twisted on a finger without being damaged. The best quality is represented by vanille givrée (frosted vanilla): vanillin has crystallized on the surface in light efflorescence. It is vanilla with the most intense and delicate fragrance. The less valuable qualities are intended for wholesale, for the industrial food market or are used for the preparation of vanilla extract or vanilla powder. The vanilla extract is obtained by macerating pods in alcohol, the powder by crushing the pods.

Preparation method –
For the preparation of vanilla pods are fermented and dried, only then do they acquire the brown color and aroma found in the pods that are purchased to flavor the dishes.
Vanilla is used to flavor sweets, sugar, milk and other pastry preparations, but also in savory dishes, especially in Eastern and African cuisines, even if we currently find it more and more also in Italian cuisine. It is also possible to extract essential oil from the pods, and use it directly in the preparations.
It should be remembered that vanillin, which is the main aromatic molecule present in natural vanilla, is commercially available in the form of white or yellowish crystals (if not pure), or liquid extract. It is very convenient because it is used like sugar (crystallized sugar) or by dosing it drop by drop, with the only warning not to overdo it, because to flavor a dessert it takes very little. The risk is to make the dessert cloying and above all to make it bitter.
Obviously compared to natural vanilla, vanillin has a narrower range of aromas: in fact the aroma of natural vanilla is composed of dozens of substances, the main of which is vanillin. The result of the mixture of these substances is a broader aroma bouquet, which gives the sensation of being more elegant, less cloying, less “fake”.