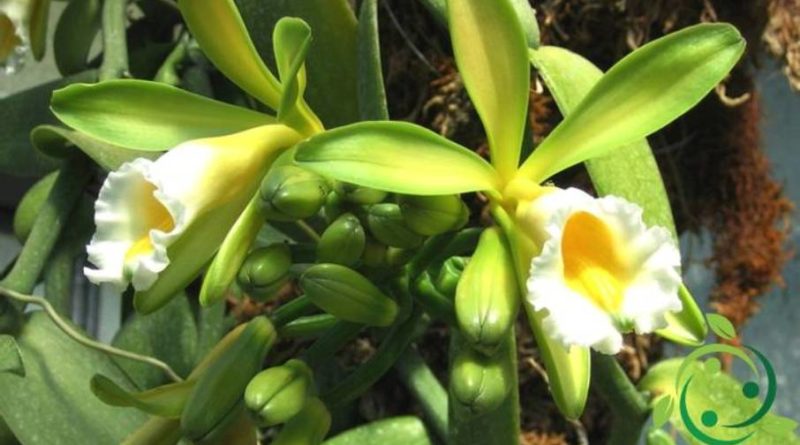 How to grow vanilla

The vanilla plant (Vanilla planifolia Jacks. Ex Andrews, 1808) is a liana, of the Orchidaceae family which, in order to grow, needs humid tropical climates where it is cultivated essentially with three systems:
– in the undergrowth, tree trunks are used as support;
– it is cultivated in catch crops, for example together with sugar canes;
– lastly it is also grown in a greenhouse.
In these crops, farmers practice pruning, check (or practice) the fastening of the stems, and in particular fold the vines so that the pods are at the correct height (one and a half meters) for easy harvesting.
Its fruits, commonly called pods, produce the spice known as vanilla.
In the cultivation of vanilla a very important factor is that of fertilization which must always be done manually from flower to flower. The procedure used has always been the same since it was discovered by Edmond Albius.
This is done early in the morning (the flowers have a short life of the order of a few hours, at the beginning of the day) and when there is no humidity (rain does not allow the formation of flowers).
In natural growth, fertilization is ensured by some bees of the genus Melipona, a genus of bees without a stinger.
Tornabdo to artificial pollination, this is performed by holding the flower gently with one hand, a finger serves as a foothold under the column (the central part of the flower).
At this point a pointed but not sharp instrument is used, for example a prick, tearing off the hood that protects the male sexual organs. Still with this tool, the tongue (the rostellum) that separates the female organs from the male part is straightened and the stamen, on which the pollen is found, is approached with the fingers towards the stigma by exerting a slight pressure to ensure good contact.
As far as cultivation techniques are concerned, vanilla is a plant which, while loving bright places, must grow in areas sheltered from direct sunlight. The optimal temperature ranges from 15 to 25 ° C.
In Italian climatic conditions, vanilla can be grown in conditioned areas (greenhouses) or in suitable environments (even in pots in apartments) provided that certain rules are respected which we will see.
To start, let’s say that it is a plant that needs space: consider that in adulthood, as an adult, it can measure up to 4 m in length, and the shoots must be climbed on a sturdy and long brace, folding them and fixing them to it.
The substrate suitable for Vanilla planifolia must be composed of sphagnum (light and permeable moss) or bark of non-resinous plants and osmunda fiber (fern root).

This plant, if grown in pots, should be watered with rainwater or demineralized at least 2 times a week. Furthermore, in order to ensure the right degree of environmental humidity for the plant, especially if the environment is too dry, at least 2 daily nebulizations with non-calcareous water are necessary. In winter, however, the watering should be reduced to the bare minimum.
As regards the supply of nutrients, vanilla, from the vegetative restart and throughout the summer, must be fertilized, on average every 15 – 20 days with a specific fertilizer for orchids balanced in nitrogen, phosphorus and potassium, but also with a small percentage of iron, zinc, copper, manganese.
When the plant reaches the end of flowering stage, it is avoided to fertilize for a couple of months and after this rest period, it starts to fertilize regularly.
As far as reproduction is concerned, this plant reproduces by seed, as happens in the places of cultivation.
The multiplication of Vanilla can however be practiced more easily by cutting a safe propagation technique and which produces plants with the same genetic characteristics as the mother plant.
In this case, after flowering, portions of branches about 15-18 cm long are taken with sharp and disinfected scissors. It is advisable to treat the cuttings with a rooting hormone and subsequently placed in a mixture of sand and peat in equal parts.
Furthermore, to encourage rooting, the seedling must be placed in a place at a constant temperature of about 25 ° C and kept constantly humid until the appearance of the new shoots that generally appear after about a month.
After one year from this period, the vanilla plants can be transplanted into single pots and bred in them until the moment of permanent planting.
It should be noted that Vanilla planifolia is a plant characterized by a very fast growth that requires a lot of space, which is why it must be planted in holes at a distance of 1 meter on the row and about 2 between the rows. Each plant must be supported by a tutor to make its long branches climb.
If, on the other hand, vanilla is grown in pots, it must be provided with a very spacious and deep container to allow regular development of both the root system and the aerial part.
As far as the fruit picking is concerned, it is evident that in the places of production, the vanilla fruits are still harvested green, after a long and difficult drying period, they turn black and acquire their unmistakable aromatic scent. Generally the collection of pods starts three years after sowing.
The technique also requires that, after harvesting, the fruits are dried in the air in an airy and shady place.
After drying, the pods are kept whole in glass jars and stored in a dark and cool place.
Finally, a hint as regards the phytopathies and diseases which the Vanilla plant can often encounter. This is a plant sensitive to root rot, especially if the growth substrate is not well drained, moreover it can be attacked by mealybugs and aphids that usually nest in the leaf intersections, especially if it is exceeded with nitrogen fertilizers.