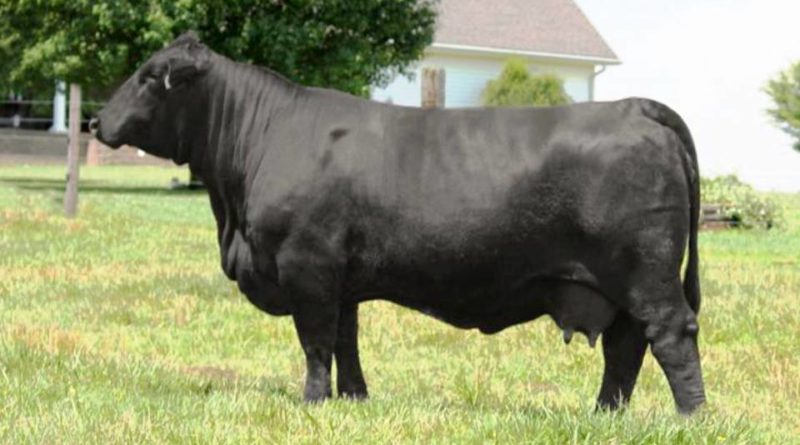 Brangus is a bovine breed (crossbreed Bos taurus L. and Bos taurus indicus) originating in the United States and is an aptitude breed for meat production.

Geographical and Area Distribution –
Brangus is a bovine breed that is bred throughout the United States and Canada, Mexico, Australia, Argentina and Southern Rhodesia in Africa.

Origins and History –
The Brangus is a breed of United States origin, mixed breed, obtained by crossing Braeban zebu with Angus breeders.
The development of the breed began in 1932, and the first association of Brangus breeders was founded in 1949. During the same period Clear Creek Ranch (of Welch, Oklahoma and Grenada, Mississippi), Raymond Pope (of Vinita, Oklahoma), Essar Ranch ( of San Antonio, Texas) and some individual breeders in other parts of the United States and Canada were pursuing private experimental breeding programs.
Much of the work on creating this breed was conducted at the USDA experimental station in Jeanerette, Louisiana.
This breed was created to integrate the best characteristics of Angus cattle with Brahman zebu.
Brangus cattle are made up of 3/8 by Brahman and 5/8 by Angus.
This combination translates into a breed that combines the traits of two highly successful breeds. On the one hand the Brahman breed, through rigorous natural selection, has developed excellent disease resistance, general robustness and exceptional maternal instincts, while the Angus breed is known for its qualities linked to an excellent carcass, with females extremely functional with excellent fertility and milking ability.
The first breeders from 16 U.S. states and Canada met in Vinita, Oklahoma on July 2, 1949, and organized the American Brangus Breeders Association, which was later renamed the International Brangus Breeders Association (IBBA), based in Kansas City, Missouri and finally San Antonio, Texas, where headquarters have been based since January 1973. Currently there are members in almost all states, Canada, Mexico, Australia, Central America, Argentina and Southern Rhodesia in Africa.

Morphology –
Brangus cattle have a predominantly black or red coat, elegant and pigmented skin.
Their ears are medium to large and the skin is loose, with folds in the neck.
The rump is slightly rounded and the bulls have a moderate hump. Brangus bulls are medium-sized animals with adults who generally weigh between 820 and 920 kg, while females weigh between 500 and 550 kg.
They have absent horns and pigmented muzzle.

Productive attitude –
Brangus is a bovine breed with a prevalent aptitude for meat production.
The bulls reach sexual maturity at the age of two and are ready to be used within 18 months. Heifers are ready for breeding within 14 months and can give birth to their first calf at 24 months.
Bulls can remain on the farm for up to 12 years, while cows can produce calves over 14 years. Cows are good mothers and calves are usually medium in size at birth.
In general it is a very versatile breed with good processing of food coming from pasture or from supplementation with feed; it also shows good resistance to hot climates, even with high humidity. This breed therefore responds well to good feeding conditions but has also shown good resistance in stressful conditions.
In conditions of cool and cold climate they seem to produce a thicker coat which gives this breed adequate protection.
Ultimately the Brangus show a good temperament, they are extremely fertile and productive animals and very bred in tropical and sub-tropical countries.