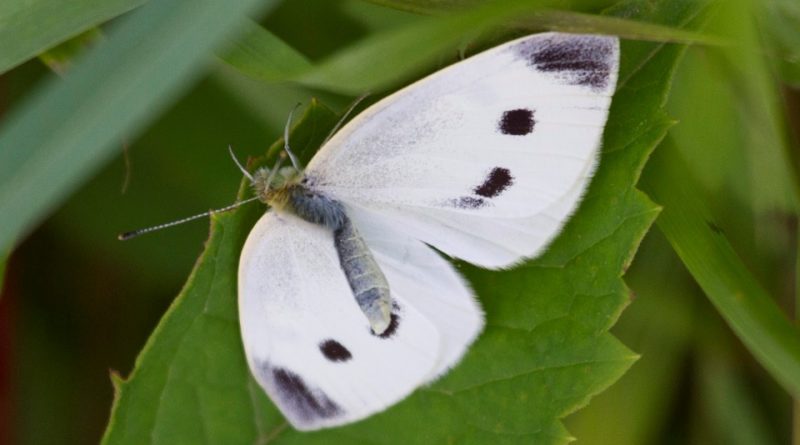 The cabbage butterfly (Pieris brassicae L. 1758) is a Lepidoptera belonging to the Pieridae family.

Geographical Distribution and Habitat –
The cabbage butterfly is a Palearctic insect, widespread in continental Europe, in the Mediterranean basin and northern Africa included. Its diffusion extends to the Himalayan massifs.
In Italy it is present throughout the territory and its habitat is that of flowered areas, particularly frequent in gardens, where it lives above all at the expense of Cauliflower and other Crucifers, from sea level up to 2200 – 2300 m. sl.m ..

Morphology –
Pieris brassicae is a moth, in which the adult can reach about 60 mm in wingspan.
The wings are white in color, with the front ones having the apical ends in black which in the females are decorated with two black spots per wing.
The larvae are about 35-40 mm long, greenish yellow in color, speckled with black and the body is covered with sparse bristles.
The larvae occur between the months of May and November, in close groupings.
The pupae are succinct and incisalized all year round on palisades or on any vertical support, sometimes even in gardens, and in this stage they spend the winter.
The eggs are of a bright yellow color and can normally be seen on the underside of the leaves.

Aptitude and biological cycle –
The cabbage butterfly, as mentioned, spends the winter as a chrysalis hanging in shelters, between the bark or in the walls, etc.
The appearance of the adults begins with the month of April and the flickering continues until the month of May (1st flight); in turn these adults mate and lay their eggs in groups, from April to September, in groups of 50-100, on the underside of the Cauliflower leaves.
After about 15 days there will be the birth of the larvae of this generation that live, for a certain period, gregarious; when they reach maturity they become valid and arrived in the period between the end of June and the beginning of July, the new adults appear (2nd flight) which start the second generation. If the environmental conditions are favorable, others may follow this generation.
The trophic action of the larvae, which feed on the outer leaves that completely gnaw, with the exception of the larger veins, can cause economic damage if the population of these insects is high and if it mainly affects agricultural crops.

Ecological role –
Cabbage butterfly is a butterfly that feeds mainly on cultivated varieties of Brassicaceae, especially Brassica oleracea (cabbage), and plants of the Tropaeolum genus.
When it attacks the cabbage its leaves are totally devoured, with consequent economic damage for farmers.
In general, the species that are attacked are:
Armoracia rusticana
Barbarea stricta
Berteroa incana
Brassica napus v. napobrassica
Brassica oleracea v. botrytis
Brassica oleracea v. capitata
Brassica rapa
Brassica spp.
Bunias orientalis
Cakile maritima
Capsella bursa-pastoris
Crambe maritima
Draba incana
Erysimum hieraciifolium
Hesperis matronalis
Isatis tinctoria
Lepidium spp.
Lunaria biennis
Raphanus raphanistrum
Raphanus sativus
Sisymbrium spp.
Tropaeolum majus
Tropaeolum peregrinum
Tropaeolum spp.
But they can also be found on Reseda odorata (fam. Resedaceae), Capparis spinosa (fam. Capparaceae) and Nicotiana tabacum (fam. Solanaceae).
In normal conditions the damage is not particularly serious, also due to the effective control of populations carried out by the numerous natural parasitoids, especially Hymenoptera.
For this reason it is necessary not to intervene with the use of insecticides or other pesticides that could unbalance the biocoenosis of useful insects.
In fact, the populations of Pieris brassicae, in ordinary conditions, are kept within normal levels by natural parasitoids including:
– Trichogramma evanescens (W.), Hymenoptera oophagus;
– Apanteles glomeratus (L.), endoparasitoid hymenoptera of larvae;
– Phryxe vulgaris, Diptera Larvevoride.
To these must be added some fungi and pathogenic bacteria which, together with the high or low environmental temperatures, greatly influence the mortality of this phytophagus.
For this reason, the fight against cabbage butterfly must be chemical, only in extreme conditions; in order to avoid this intervention, biological control or guided and integrated control criteria must be adopted in advance.
For this reason, the direct fight is carried out only in the presence of strong infestations and in these cases the following are used:
– biotechnological insecticides;
– organic insecticides: products based on Bacillus thuringiensis ssp. kurstaki, against the larvae of the early ages;
– and in extreme cases with chemical insecticides, which is however always avoided if the farmer has followed careful programs of organic agriculture and agroecology.