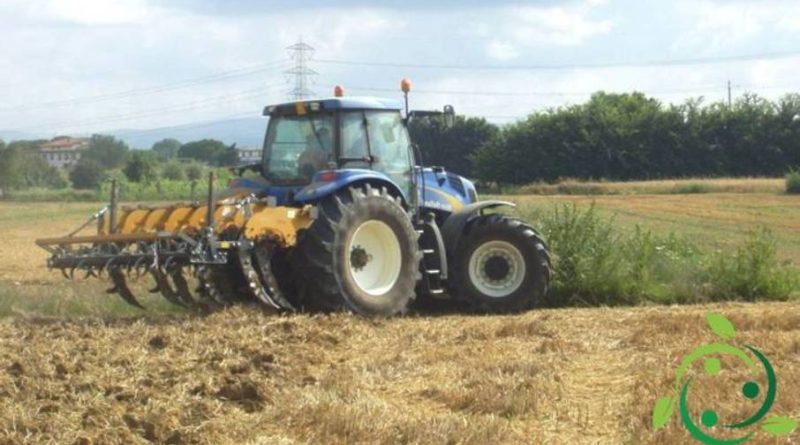 Punctuation, in agronomy, is a tillage, using specific tools, called subsoilers, which is normally performed as complementary work after plowing as a corrective or supplementary intervention. In the first case, the re-pitting has the purpose of breaking the processing crust formed by plowing, an intervention necessary above all when resorting to shallow plowing on clay soils. In the second case, it aims to deepen the processing when plowing is carried out superficially to avoid bringing unwanted soil to the surface.
In both cases the re-pitting is carried out at a greater depth than the previous plowing.
The combination of pitting and plowing takes on the character of a two-layer process.
This double processing is carried out in two steps (plowing and re-chopping) or, more simply, in a single step when using the chisel plow.
In general, pitting is a less energetic plowing process since the alteration of the soil profile is negligible.
The soil thus worked appears moved on the surface by a series of grooves just mentioned or with a certain clodiness according to the physical characteristics of the soil.

A macroporosity is created along the profile, due to the effect of the cut, and a certain degree of crumbling. The effectiveness of the side crumbling depends on the physical properties of the soil and is accentuated with the use of vibrating scarifiers.
The pitting, compared to plowing, has some advantages and other disadvantages.
Among the advantages:
– for the same depth it requires a lower traction force;
– does not alter the profile, therefore it is useful when you want to avoid bringing unwanted soil towards the surface;
– does not leave the working sole, on the contrary it removes it if the re-stitching is carried out as a complementary job to plowing or in alternate years with respect to it.
Among the disadvantages:
– the burial of fertilizers and other materials is modest;
– the action against weeds is less;
– unlike in silty-clayey soils, in some sandy soils with low bearing capacity, the working sole can be considered a positive rather than negative phenomenon.