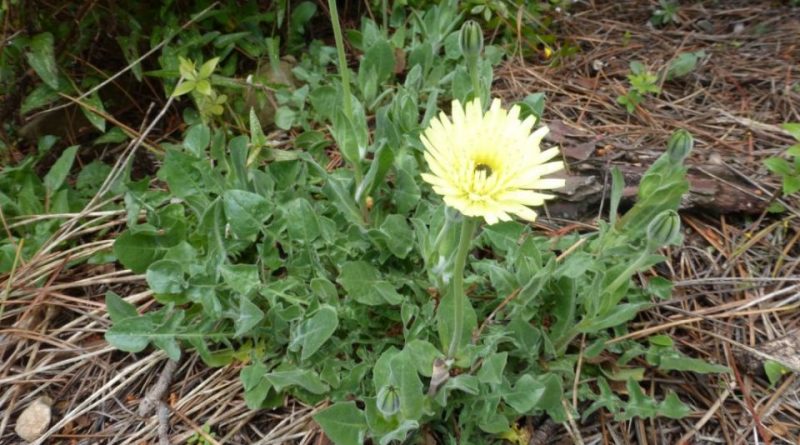 Systematic –
From a systematic point of view, it belongs to the Eukaryota Domain, the Plantae Kingdom, the Spermatophyta Superdivision, the Magnoliophyta Division, the Magnoliopsida Class, the Asteridae Subclass, the Asterales Order, the Asteraceae Family, the Cichorioideae Subfamily, the Cichorieae Tribe, the Hypochaeridinae Subtribe and therefore to the Genus and the Genus.
The following terms are synonymous:
– Arnopogon dalechampii (L.) Willd .;
– Tragopogon bicolor Moench;
– Tragopogon dalechampii L., 1753;
– Tragopogon laetus Salisb .;
– Tragopogon verticillatus Lam .;
– Urospermum grandiflorum St. -Lag ..

Etymology –
The term Urospermum comes from the Greek οὐρά ourá tail, beak and from σπέρμα spérma seed: for the long prolongation of the achene.
The specific epithet dalechampii is linked to the French physician and botanist Jacques Daléchamp (Daléchamps) (1513-1588), author of the encyclopedic work Historia generalis plantarum (1586), to whom the species was dedicated.

Geographical Distribution and Habitat –
Smooth golden fleece is a typically Euro-Mediterranean species, mainly distributed on the central western side of the continent.
In Italy it is present mainly in the center and south. It is also found on the reliefs of the departments of Alpes-de-Haute-Provence, Alpes-Maritimes and Drôme, in the central massif, in France and in the Pyrenees.
Outside Europe, it is also present in Africa and Asia, with the exception of the tropical one.
Its habitat is that of the sunny places of arid meadows, garrigues, uncultivated areas but also of vineyards and olive groves, areas along the roads, ruderal environments, escarpments and rocky places mixed with lawn, where it grows both on limestone soils that siliceous with neutral pH and medium nutritional values ​​of the soil which must be arid. The plant grows from sea level up to 1200 m. s.l.m., with a gradual rarefaction towards the highest altitudes. 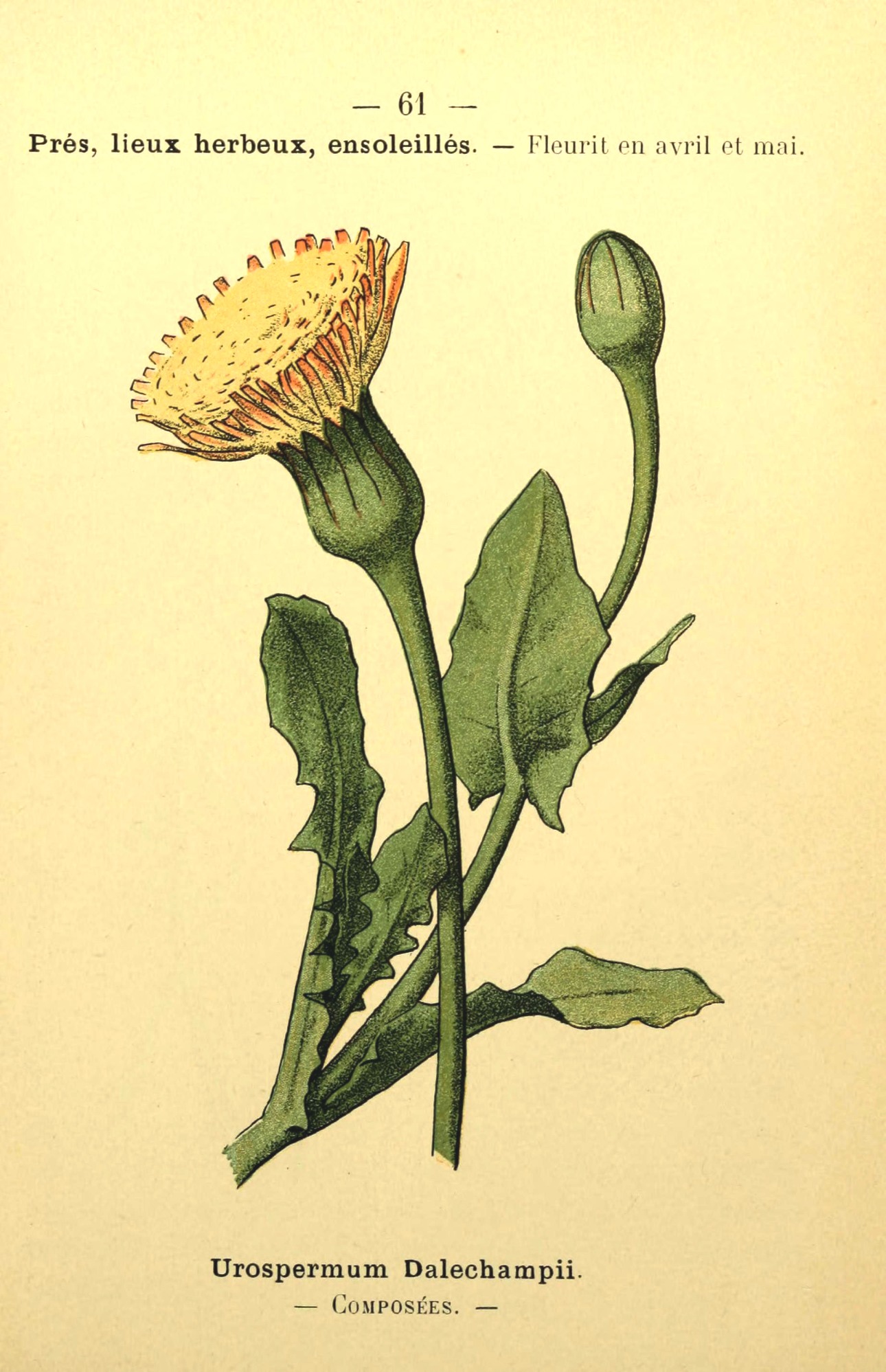 Description –
Urospermum dalechampii is a herbaceous, perennial, silky-hairy plant that grows between 20 and 40 cm.
The stem is erect-ascending, simple or slightly branchy, leafy in the lower half.
The basal leaves are pinnate seven, the caulines progressively undivided and finally whole and lanceolate.
The flowers, with the appearance of small daisies, are gathered in a large flower head, 3-4 cm long, solitary, carried on a long, enlarged peduncle; the flower head is lemon yellow in color, with the exterior with purple streaks and presents with lanceolate involucral scales, green, grown at the bottom and free at the top, wrinkled and feathered achene fruit.
The fruit is a 5-6 mm cipsela, compressed laterally. with 4-6 tuberculate ribs and rostrata with a rough beak of 11-14 mm, enlarged at the base and gradually narrowed at the apex where it supports a 12 – 13 mm pappus, feathery and dark, arranged with bristles in 2 series.

Cultivation –
The smooth golden fleece is a species that grows spontaneously with an almost indifferent distribution with respect to the soil characteristics of the substrate and that spreads via seeds.
However, it prefers arid and sunny areas.

Uses and Traditions –
Urospermum dalechampii, due to its organoleptic characteristics and the active ingredients contained, is to be considered an edible and officinal plant.
The soft basal leaves of this plant are used, collected before flowering, boiled and seasoned, moreover the flower buds can be preserved in brine like capers.
The basal leaves, with a bitter taste, are used like those of chicory, usually together with other herbs.
The most suitable collection period is between March and April.
Of these herbs with a characteristic bitter taste, it is advisable, in the collection of the leaves, not to uproot the entire plant.

Preparation method –
The smooth golden fleece, like many alimurgic plants, is suitable for the preparation of many dishes linked above all to the local traditions where it grows. In general, however, the most tender leaves are collected to consume them boiled. Even the buds, as mentioned, lend themselves to be preserved in the same way as capers.