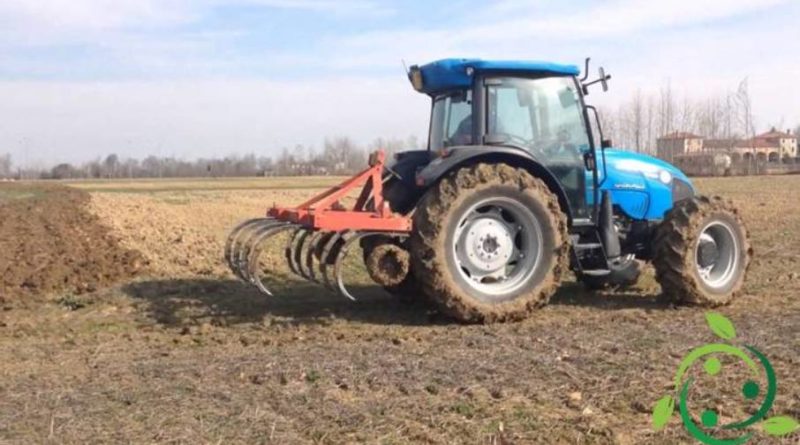 The term grubbing, in agronomy, means the work that generally integrates the plowing improving the conditions for the subsequent harrowing and preparation of the seedbed.
The grubbing up is done with a tool called a grubbing machine.
Grubbing up is generally advisable in compact soils when plowing is performed several months before harrowing.
This condition occurs in the case of summer plowing and autumn sowing and, above all, in the case of autumn plowing and spring sowing: in fact during these time intervals the clods undergo a partial crumbling due to weathering but in the meantime the soil tends to compact on the surface and to be covered with weed vegetation. The grubbing reduces the surface compactness and eliminates any vegetation that may have appeared creating the suitable conditions for performing the harrowing. In some cases, for example with undemanding crops that adapt to a seed bed roughly prepared and on not particularly tenacious soils, grubbing up can also be the final complementary work, leaving the soil ready for sowing.

The tool that performs the grubbing up, is a dissecting organ that makes vertical cuts on the previously worked soil, breaking any surface crust formed, partially reducing the size of the clods, making the soil profile homogeneous, bringing in surface roots, bulbs, tubers and rhizomes of weeds, eliminating any weeds developed on the surface.
The discissor, that is the grubber, is a tool consisting of a supporting frame on which 1-2 series of straight or curved profile arms are inserted, ending with a spade that favors penetration into the ground and at the same time enhances the action of deep dissection. The arms can be rigid or elastic.
Extirpation is a process that allows a fast forward speed and that reaches a working depth, normally, between 20 and 30 cm and rarely beyond and requires low traction forces.
The grubbing up is best used in the minimum tillage technique. In this case, the grubbing up subrogates the plowing by performing a less energetic and less deep work.
In addition, grubbing up can be carried out as a cultivation work as an alternative to weeding, a technique which, in these cases, involves the use of smaller grubbers, used in the inter-row, if the rows are sufficiently separated or, more frequently, on multiple rows if the spacing between the arms is compatible with the distance between the rows.