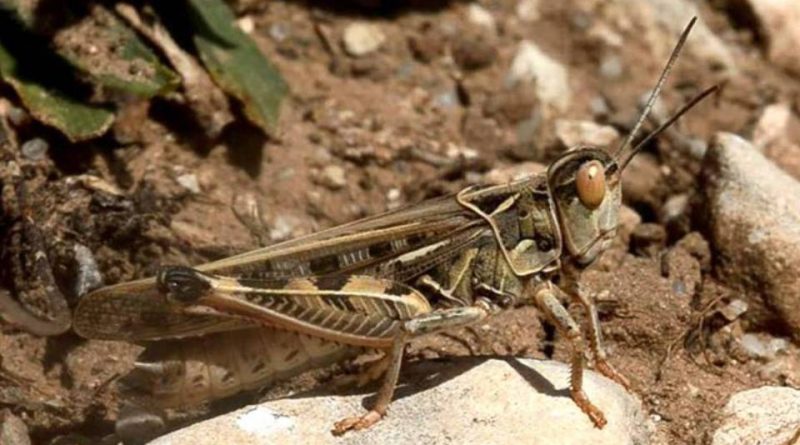 The Moroccan locust (Dociostaurus maroccanus (Thunberg, 1815)) is an orthoptera insect belonging to the Acrididae family.

Geographical Distribution and Habitat –
The Moroccan locust is a typical insect of Morocco but with a wide spread in North Africa, southern Europe and western Asia.
This species occurs in these areas both in solitary and gregarious form, at altitudes ranging from sea level up to 1000 m. and with a habitat mainly linked to less cultivated areas, pastures, steppes, hills and in arid areas around the Mediterranean.

Morphology –
The Dociostaurus maroccanus, is also called with the name of Crusader grasshopper for the characteristic cross of S. Andrea on the pronotum and has sexual dimorphism.
This insect has a reddish color with brown spots.
The posterior wings are devoid of particular coloring while in the external part of the posterior femurs it has three dark spots.
The female can also have dimensions greater than 35 mm even if her ordinary dimensions oscillate between 20 and 38 mm; the male, on the other hand, hardly exceeds 28 mm.
Individuals living in solitary form are more subtle than those living in gregarious form.

Aptitude and biological cycle –
The Dociostaurus maroccanus carries only one generation per year with the insect that spends the winter like an egg, laid in the ground, in oothecas called “torches”.
Nymphs usually appear from the April period and adults about a month later; the hatching of the eggs (and the appearance of the nymphs) is scalar and occurs gradually.
Their cycle begins in late May or June, the period in which mating takes place which is repeated several times in the hot hours of the day. Fertilized females tend to return to spawn in the areas from which they started, but they can also find favorable alternatives such as compact and arid wastelands. Once fertilized, the females lay 2 or 3 ootheca containing about 30 eggs.
In favorable climatic and environmental conditions the concentration of eggs can be very high and can reach several thousand per square meter.

Ecological role –
The Dociostaurus maroccanus is a grasshopper that occurs quite frequently in the gregarious form which is the one that involves the most damage and devastation. In Italy it is particularly fearful in the central-southern regions and the islands, so much so that even in the past serious devastations have been recorded in Sardinia, Campania and Puglia.
This grasshopper feeds on practically any type of plant and, in the event of invasion of gregarious groups in cultivated areas, the economic damage to farms is very significant.
The main infestations occur mainly in the steppes, in the hills and in the arid areas of the Mediterranean.
In the presence of well-kept cultivated areas, the species is more contained due to the destruction of the oothecae which, on the other hand, if left undisturbed, as in the over-grazing areas, can follow the growth of large gregarious groups. In fact, this species easily reproduces in uncultivated areas where the ootheca can be sheltered under the ground without it being moved.
For this reason, the containment of the Moroccan locust, as for other grasshoppers, must be implemented with agronomic, mechanical and also biological means of struggle but before the dispersion of adult grasshoppers.
To this end, oothecae should be destroyed especially in the marginal areas of crops, by mechanical processing.
In detail the agronomic means are represented by:
– superficial tillage and tillage of the land in autumn-spring, to destroy the ootheca;
– cultivate uncultivated surfaces and remake old meadows, now very degraded;
– in areas of oviposition (generally exposed to the south and uncultivated) carry out, if possible, soil tillage.
The struggle with chemical means, which in any case must be limited to the maximum, for obvious negative ecological repercussions consists of the treatments, localized to the areas of oviposition previously identified, by being distributed directly on the ground and on the outbreaks just formed before the birth of the nymphs.
In family gardens and, however small in size, a method of biological control can be the introduction of pharaoh hens, voracious predators of orthoptera, into infested fields.
Remember that the fight against grasshoppers is made mandatory by art. 28 of law 987 of 16/6/1931.