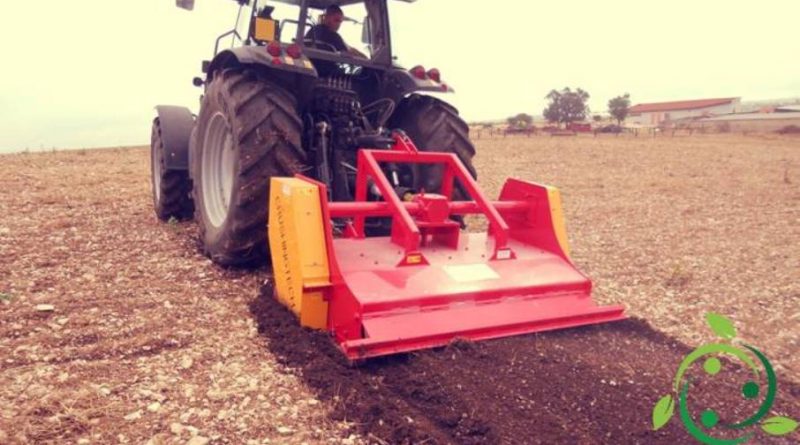 Milling, in the agricultural field, is a process performed as an alternative to plowing with the use of a milling machine.
Compared to plowing, it has the advantage of performing an effective shredding of the soil and therefore does not generally require additions with complementary works, however it does not allow to reach great depths (maximum 25 cm).
Milling is suitable for preparing the soil before sowing an interlayer crop, especially when there is a need to shorten the preparation time of the seed bed as much as possible.
Milling, with the same depth, requires high powers according to the working width.
Milling is a process carried out by rotary discoloring organs which cause the shredding and mixing of the surface layers.
The milling mechanism takes advantage of the work performed by a high-speed rotating shaped tool that causes, as it advances, the erosion of a layer of soil, chopping it into lumps that are scrambled and stratified immediately behind the tool.

The machines used to carry out the work are called rotary milling or hoeing machines.
The actual milling machine is an operating machine applied to the three-point hitch of the tractor. The working parts are composed of a series of shaped blades, called knives, fixed on a horizontal rotating rotating axis, by means of a transmission from the tractor power take-off.
On the machine frame there is a rear casing that has the purpose of preventing the lumps that are formed from being thrown at a distance, making sure that they stratify immediately after the working organ.
The rotary hoes, while performing a similar job, differ from the milling machines proper for having rigid knives, while the milling machines have elastic working members.
When it comes to working on small surfaces, such as family gardens or small gardens, self-propelled rotary hoes called motor hoes are used. These machines are equipped with a large rear handlebar for pushing and controlling the machine by the operator who proceeds on foot.