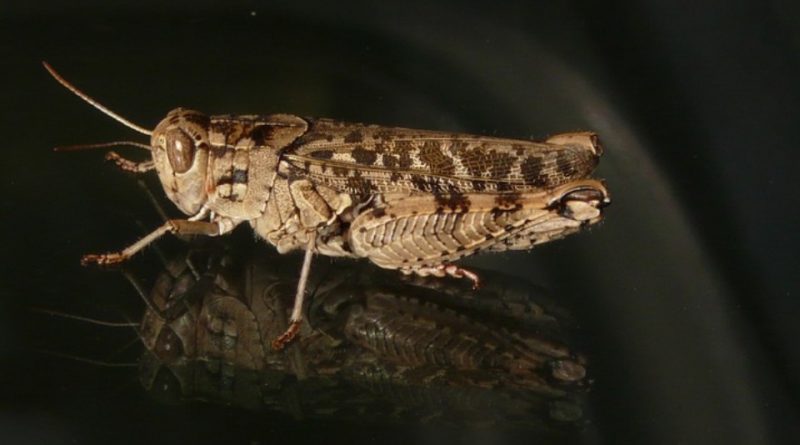 The Italian locust (Calliptamus italicus (Linnaeus, 1758)) is an orthoptera insect belonging to the Acrididae family.

Geographical Distribution and Habitat –
The Italian locust is an insect widespread in the countries of the Mediterranean basin, with an area that includes southern and central Europe (Spain, France including Corsica, Italy, Germany, Belgium, Switzerland, Austria, Slovenia, Bosnia and Herzegovina, Croatia, Serbia , Kosovo, Vojvodina, Montenegro, Macedonia, Albania, Greece, Czech Republic, Slovakia, Poland, Romania, Bulgaria, Hungary, Moldova, Ukraine and Russia), North Africa and part of western Asia (Turkey, Middle East, Georgia, Armenia , Azerbaijan, Iran, Iraq).
In Italy it is present in a large part of the peninsula and in the major islands, even at altitudes of about 1000 meters and in some conditions this species can develop a tendency towards gregariousness with the formation of numerous populations that can also damage crops.
Its habitat is that of arid environments and meadows.

Morphology –
Calliptamus italicus, characterized by a sexual dimorphism, where females measure 21–36 mm and males do not exceed 26 mm.
The species has a gray or brownish color and is recognized for the characteristic pink color of the basal part of the hind wings, which is however noticeable only in flight.
You can also recognize the three hulls, parallel running, of the pronotum and the three dark spots on the inside of the posterior femurs.
The newly born nymphs have a whitish color, to then become brown in color and through more moulting they reach the imaginal stage in 40-50 days.

Aptitude and biological cycle –
The Italian locust is an insect that makes only one generation per year.
The egg-laying period occurs between late August and early September and the eggs are laid in the ground, at a depth of 2–3 cm, inside an ooteca which can contain from 25 to 55 eggs wrapped in a spongy secretion.
The insect spends the winter at the egg stage and the nymphs are born from the period of May-June; adults will appear from July onwards, depending on weather conditions.
Both the nymphs and their voracious defoliators and in the case of a large number of individuals, damage to herbaceous crops but also to cultivated arboreal and forest plants can be registered.

Ecological role –
Calliptamus italicus is a polyphagous species that feeds on various spontaneous plants and herbaceous crops, including especially legumes and horticultural crops. The greatest damage often occurs on alfalfa (Medicago sativa).
For the containment of this insect, if you are in the presence of crops, the mechanical fight of destruction of the oothecae before the hatching of the eggs is useful.
Among the methods of biological control Biological control, it should be remembered that a mushroom (Entomophaga grylli) is effective, the use of which as a biological agent is however still under study.
On the farm with cultivation diversification and, especially with the presence of low court animals, such as the guinea fowl (Numida meleagris), this insect is limited because it feeds mainly on insects and in particular on grasshoppers.
Among the agronomic means, we remind:
– the adoption of superficial tillage and tillage of the land in autumn-spring, to destroy the ootheca;
– the cultivation of uncultivated surfaces and the reconstruction of old meadows, now very degraded;
– the tillage where there are believed to be oothecae that are generally exposed to the south.
Chemical control interventions, although made mandatory by art. 28 of Law 987 of 16/6/1931, must be carefully evaluated and in any case must represent the last eventuality in the case this species assumes the characteristics of a gregarious population.
During the birth period of the nymphs, infestation treatments with deltamethrin-based pyrethroid insecticides specifically authorized for civil use can be adopted, while insecticide treatments on adults are absolutely useless and harmful in any case for the entire agricultural ecosystem.
The real fight against Calliptamus italicus is carried out with the control of the places of deposition (ootheca) where it is possible to intervene with localized and not widespread insecticide treatments and distributed directly on the ground.
A good crop rotation, the use of agro-ecological techniques with diversification of cultivated species and rotations and the adoption of mechanical cleaning interventions in marginal areas can considerably contain this insect.