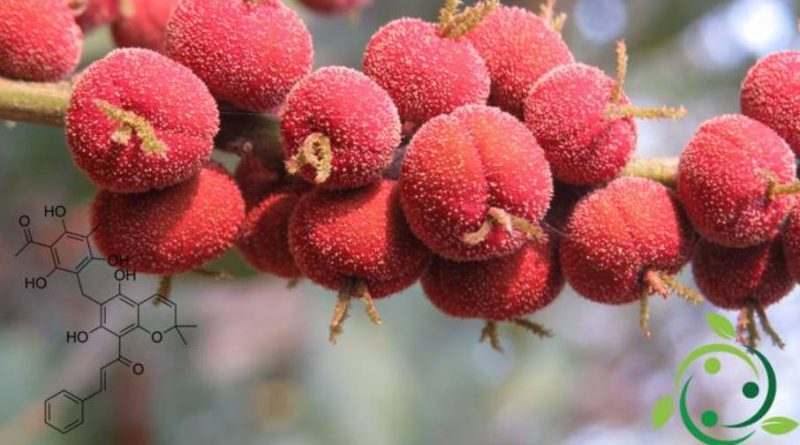 Rottlerin, whose brute or molecular formula is: C30H28O8, also known by the name of (mallotoxin) is a naturally derived substance polyphenolic isolated from the fruits of Kamala (Mallotus philippensis (Lam.) Muell.Arg.), A plant with origin attributable to the Philippines, which is often found on the edge of the rainforest or in areas with moderate or high rainfall in tropical Asia, Africa and Australia.
In this regard, it should be remembered that Kamala is used by local populations to prepare fabric dyes, syrups for and used as an old remedy for tapeworm, due to its laxative effect. Among other uses, it is used for skin diseases, eye diseases, bronchitis, abdominal diseases and enlarged spleen, although scientific evidence is lacking in this regard.
Since 1994, Rottlerin has been used as a protein kinase C (PKC) inhibitor which is a serine / threonine kinase, activated by diacylglycerol. This molecule takes part in cell signaling and communication mechanisms. The name is due to the fact that it is dependent on the Ca2 + divalent cation. Once activated, the PKC has the ability to transmit the received signal by going to phosphorylate target proteins.
Recently, an increasing number of tests suggest that rottlerin may have anticancer activities through, precisely, independent PKC pathways, such as the inhibition of Cdc2, decoupling of mitochondria, induction of the lattice and up-regulation of death receptors.

Some studies show that rottlerin improves the recovery and functionality of the hearts of rats, treated with a buffer after a cold cardiac arrest. Most patients recover, but some develop low-performance heart syndrome attributable in part to depressed left or atrial ventricular contractility, which increases the likelihood of death.
In general, rottlerin increases cardiac contractility, regardless of its vascular effects, as well as greater perfusion through vasomotor activity. The activation of the BKCa ++ channels by rottlerin relaxes the coronary smooth muscle and improves myocardial perfusion after cardioplegia.
Among the other properties possessed by rottlerin we mention those antioxidants although it is not clear whether the effects are due to the opening of the BKCa ++ channel or to an additional mechanism of this molecule.