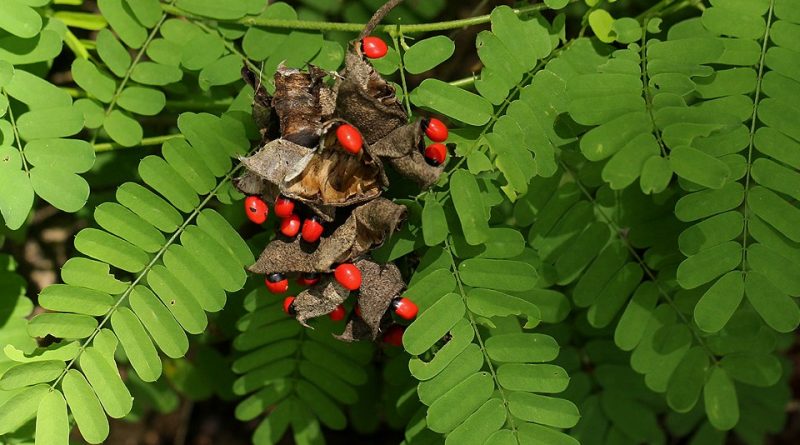 The Rosary Pea (Abrus precatorius L.) is a shrubby species belonging to the Fabaceae family.

Systematic –
From a systematic point of view it belongs to the Eukaryota Domain, Kingdom Plantae, Magnoliophyta Division, Magnoliopsida Class, Fabales Order, Fabaceae Family, Faboideae Subfamily, Abreae Tribe and therefore to the Genus Abrus and to the Species A. precatorius.

Etymology –
The term Abrus comes from the Greek ἀβρός abrόs graceful, delicate: in reference to the foliage.
The specific epithet precatorius comes from the Latin and means “praying” or “the one who prays”, referring to the use of the seeds of the species as specks of prayer.

Geographical Distribution and Habitat –
Abrus precatorius is a plant native to an area between Indonesia, Australia and eastern Asia but which grows widely in tropical and subtropical areas where it tends to be invasive. 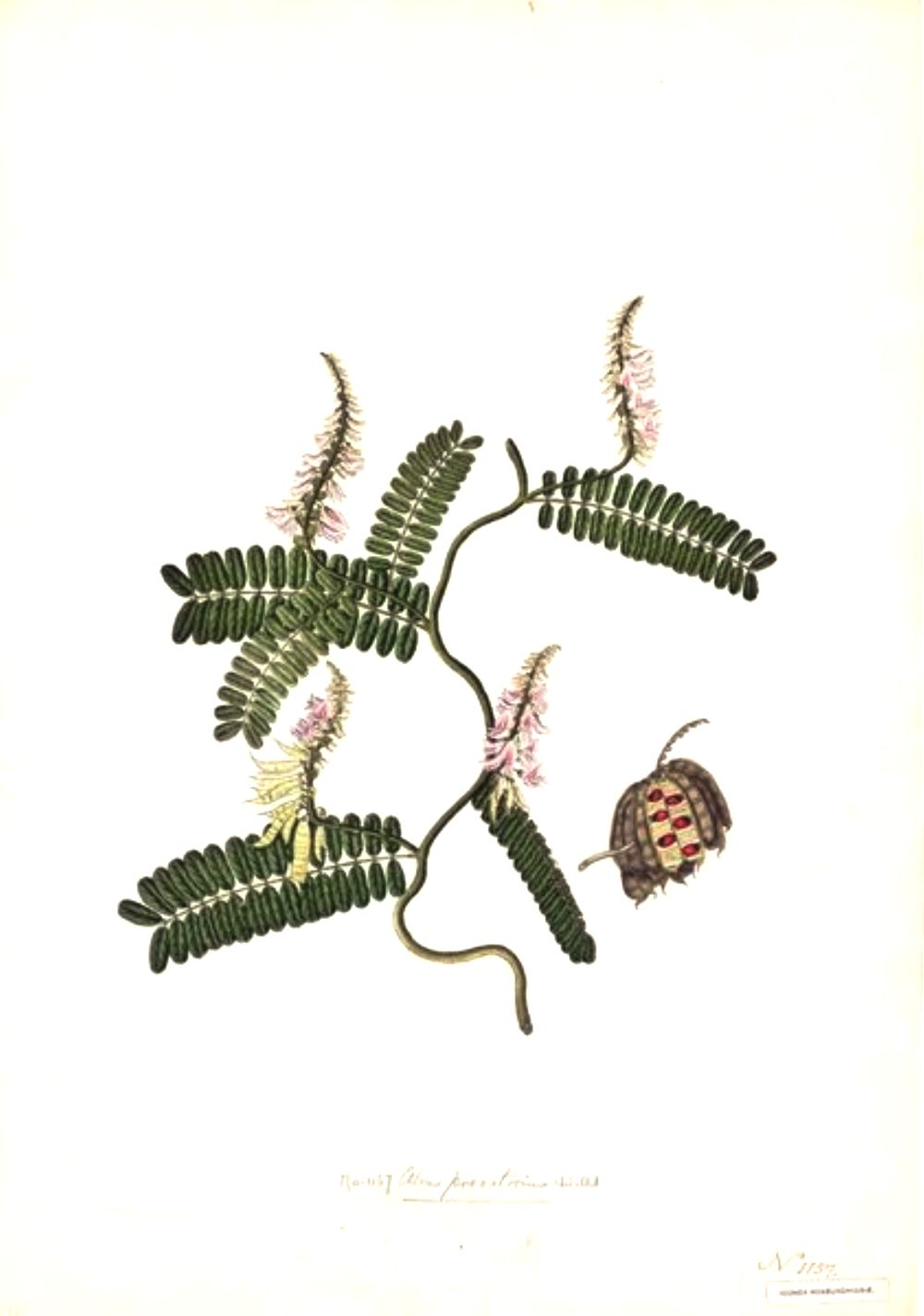 Description –
Rosary Pea is a plant in the form of a climbing shrub that can grow up to 3-6 meters and which tends to intertwine on other plants.
The leaves are alternate, composed, similar to feathers, with small oblong leaflets.
The flowers are numerous and appear in the axes of the leaves along the stems; they are small, grouped in 2.5 – 7.5 cm long clusters, usually red to purple or occasionally white in color.
The fruit is a legume about 3 cm long containing hard ovoid seeds and about 1 cm long.
The seeds contain a very toxic substance (abrin, 75 mg / 100g of seed), actually composed of four isotoxins (abrin a, b, c and d).

Cultivation –
Abrus precatorius is a plant grown in many parts of the world but which easily tends to be invasive and then difficult to control. It grows mainly in tropical and subtropical climates and with thermo-pluviometric trends typical of these areas.
Abrus precatorius is a highly invasive plant in warm and tropical temperate regions.
In fact, this plant was widely introduced by man, after which the seeds had been spread by birds. By the end of the twentieth century, it had been declared as a pest and invasive in many regions, including some from Belize, the Caribbean Islands, Hawaii, Polynesia and parts of the continental United States.
In fact, once the Abrus precatorius plants have reached maturity, in favorable conditions their deep roots are extremely difficult to remove and the aggressive growth of the plants, also caused by the diffusion of the seeds, makes it extremely difficult to eliminate them and obviously the use of herbicides such as glyphosate, although effective, are a worse evil than the remedy.

Uses and Traditions –
The leaves and roots of this plant are used in South Africa to treat tuberculosis, bronchitis, whooping cough, chest ailments and asthma.
The leaves are also used as tea by traditional Tanzanian healers to treat epilepsy. In Zimbabwe, the plant is commonly used against schistosomiasis.
In Nigeria the seeds of this plant are used to treat diarrhea.
However, especially the seeds of Abrus precatorius, they are highly toxic.
Abrus seeds are the agents with which the Indian caste Chamàr poisons cattle in order to protect its hides.
To this end, small spikes are used, called sui (needles) or sutari (awl), which are prepared by immersing the awl in a thin paste of seeds soaked in water and crushed, and then drying the weapon in the sun; subsequently this is oiled and sharpened on the stone, affixed to a handle and then used to pierce the animal’s skin.
Because of its poisonousness, this plant has in fact been reported as one of the most dangerous plants in the world, after the castor oil plant (Ricinus communis L.) (Euphorbiaceae) and the Dafne laurella (Daphne laureola L.).
The toxicity of the plant, as mentioned, is due to the presence of abrina, which is a lectin, mainly contained in the seeds which, if ingested or chewed, can cause almost immediate death.
Abrin is in fact one of the most lethal poisons known, which causes severe vomiting, high fever, salivation, very high levels of nervous tension, liver failure, bladder failure, bleeding from the eyes and convulsions.
Abrin is a substance very similar to ricin found in castor seeds. It is a lectin composed of two polypeptide chains (A and B) connected by a disulfide bridge.
Poisoning by ingestion from Abrus precatorius is not supported by toxicological analysis, while thin-layer chromatography using seed extract and patient serum may be useful.
Decontamination (using gastric lavage) has been suggested as the main treatment modality for abrus poisoning since an antidote is not yet available. However, since the cause of death in most of the reported cases seems to be renal failure, hemodialysis is the most indicated therapy.
Abrus precatorius, called kundu mani in Tamil, Guruvinda ginja in Telugu and “Kunni kuru” in Malayalam, has been used in Siddha medicine for centuries. The white variety is used to prepare the oil which is said to be an aphrodisiac.
A tea is also made from its leaves, used for feverish syndromes, coughs and colds.
The poisonousness of the seeds was known by the Siddhar (individual who has achieved perfection in local spirituality) and in fact they suggested various methods for removing the poison, which are called “suththi seythal” or purification.
This is done by boiling the seeds in milk and then drying them. In this way the protein, subjected to high temperatures, is denatured and the toxicity removed.
In India the roots of this plant are used as substitutes for licorice, although they are somewhat bitter. In Java the roots are considered demulcent. The leaves, if mixed with honey, are applied to the swellings and in Jamaica they are used as a substitute for tea. Under the name of “Jequirity” the seeds have recently been used in cases of ophthalmia, a use of ancient tradition both in India and in Brazil.
The plant is also used in Ayurveda and is said to promote hair growth. It is sometimes used as an ingredient in Indian hair products.
Recent studies, carried out on rodents, on the ethanolic extracts of Abrus precatorius would lead to highlight possible potential effects such as antioxidants, anti-inflammatories and analgesics.
Other studies on the aqueous, methanolic and chloroform extracts of Abrus precatorius have shown greater inhibitory activity against a number of pathogenic bacteria such as Bacillus subtilis, Pseudomonas aeruginosa, Staphylococcus aureus, Salmonella typhimurium and Escherichia coli.
Abro also has an economic value for traditional Zulu, as it provides income for these populations who produce and sell handicrafts made from the seeds of this plant.
In Trinidad, in the West Indies, bracelets are made with brightly colored seeds to be worn around the wrist or ankle to ward off evil spirits and “mal-yeux” (evil eye). Tamils ​​use Abrus seeds of different colors. The red variety with black eye is the most common, but there are also black, white and green varieties.
Although they are sometimes used as pearls for necklaces or to constitute percussion musical instruments, this is not recommended due to the high toxicity.
This plant is also poisonous to horses.
In addition, the seeds of Abrus precatorius have a constant weight and, in past times, the Indians used them to weigh gold using a measure called Rats, where 8 Rats = 1 Masha; 12 Masha = 1 Tola (11.6 grams).

Preparation method –
Although the traditions of various peoples have seen the use of this plant for various purposes, the direct use of parts of this plant is highly discouraged. Its uses for the extraction of substances potentially useful for pharmacology may be interesting.