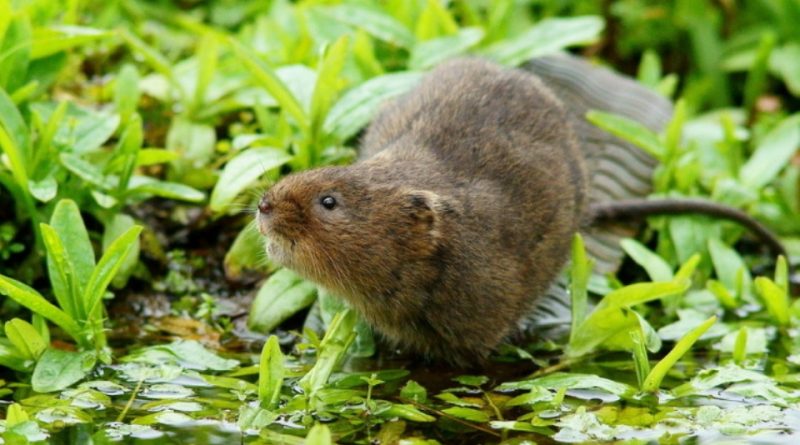 The European water rat or Water voles (Arvicola amphibius Linnaeus, 1758) is a rodent belonging to the Cricetidae family.

Geographical Distribution and Habitat –
The water vole, like other voles, is widespread in a wide range, which includes practically all of Europe (with the exception of some areas of the Iberian peninsula and France, populated by the similar species Arvicola sapidus) up to Siberia and in proximity of the Pacific coast; in the south it reaches as far as Israel, Iran, Lake Baikal and south-western China.
In Italy this rodent is present throughout the peninsula with the exception of areas of higher altitude while, despite some reports, there is no certainty of its presence in Sicily.
Its habitat is that of the banks of streams, rivers, ponds and even brackish canals (provided they have abundant riparian vegetation), wet meadows and areas of the plain or slightly hilly, to decrease its presence with increasing altitude on the level of the sea. 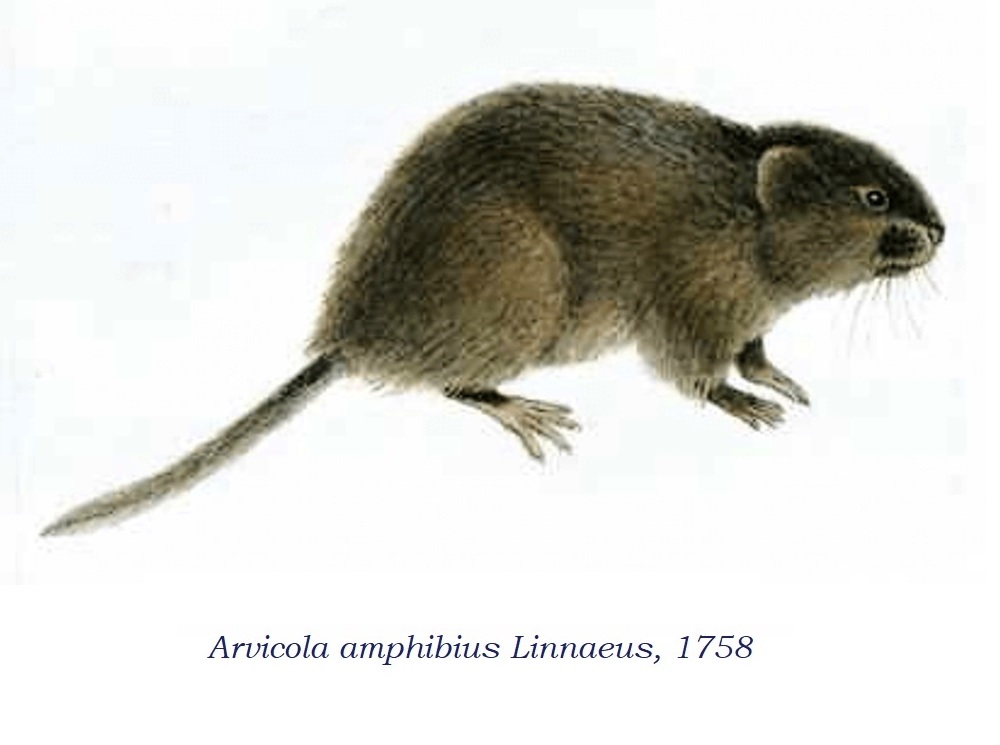 Description –
The Arvicola amphibius is an animal with a slight sexual dimorphism that is recognized for having a length, between head and body, of 19-21 cm, a tail of 10-12 cm, covered with hair, of ears 12-18 mm long and an average weight of 120, with males slightly larger and more robust than females.
The head is large and has a rounded shape, with a short and short muzzle.
The eyes are small and black, while the ears are small, in the shape of a semicircle and half hidden by the hair.
It has short, stocky legs and despite semi-aquatic lifestyle habits, normal and non-webbed toes.
It has a long, thick fur, with a silky appearance and a color that can vary in the dorsal area, also depending on the different subspecies, from dark gray to reddish brown below, with the presence of gray on the rump; the fur of the females always tends to brown, with a light belly, with shades from whitish to yellowish-gray.

Biology –
Arvicola amphibius is a mammal that reaches sexual maturity at about 3 months.
During the mating season, which runs from April to October, the males fight bitterly with each other to gain the right to mate with the females, who however mate promiscuously with more males, as shown by genetic analyzes.
The mating period is mostly from March to October and the gestation lasts 21-22 days, at the end of which the female gives birth to between three and eight puppies, blind (the eyes will be opened at five days of life) and unarmed .
As the birth approaches, the female, together sometimes with the male wing, builds a nest with very thick walls and a spherical shape at the bank or in a hollow trunk, made of intertwining reeds and herbs. In some cases the female can also use abandoned bird nests, which are however strengthened and reinforced.
Immediately after childbirth, the female goes to estrus again and can therefore be impregnated again.
The weaning of the brood takes place between two and three weeks of life, therefore the puppies move away from the mother just before she gives birth again: in this way, each female can successfully complete up to four broods per year.
The average life in nature of the Arvicola amphibius is about 5 months: most of the newborns, in fact, do not survive its first winter, while the specimens older than a year are driven out of their dens by their descendants and wander without goal, becoming easy prey.
In captivity conditions, the average life span extends up to five years, even if already from the third year of life they lose a large part of their hair and become more and more emaciated.

Ecological role –
The Water vole has long been classified as Arvicola terrestris, a taxon which today has been divided into two specific entities: A. amphibius and A. shieldan, of fossil habits.
The Arvicola amphibius is the largest of voles and swims very skillfully, even underwater.
This rodent has diurnal and nocturnal habits, and lives alone or in small groups.
The males carry out a territorial control of larger dimensions than those of the females, so that their territory partially overlaps that of one or more of them.
They are however very shy and elusive and thanks to the color of their fur they blend perfectly in the tangle of riparian vegetation, and often those who enter more or less accidentally in their territory only notice them hearing the thud of the animal that throws itself into the water to get away.
The peculiarity of these rodents is that, if they are in danger, they can count on the support of the males of their group, who take turns fighting against the enemy, while the females and the puppies fight in safe retreat in the den.
The water vole delimits its territory by means of the odoriferous glands that it has on its sides: to do this, the animal rubs its hind legs on the glands, so as to impregnate the callous plant of the feet, and then travel specific routes.
The demarcated territory can have extensions of up to 300 m2 and, inside this, the animal digs long and winding tunnels that can measure up to 35 m in winter, while in summer they are enlarged up to 75 m.
The tunnels are excavated very quickly and frantically with the use of the front legs, throwing the earth out with the rear ones and removing the stones it meets along its way by means of strong teeth, while any root that prevents the advancement is eaten.
The excavated tunnels become systems with numerous entrances, some of which (often also all) underwater, a couple of rooms used by the animal to rest, and for this purpose stuffed with hay and fur, and others in which the animal instead stores food to then make use of it in periods of lean. The latrines, on the other hand, are not found in the nest, but are placed at the limits of the territory.
The Arvicola amphibius has a fundamentally vegetarian diet, but also insects and their larvae, molluscs, crustaceans, young amphibians and fish.
In particular, the food of water voles consists mainly of succulent herbs (liliacea, lysimachia, sedge) that grow along the banks of the rivers on which it lives, but also eat caryopsis (wheat, oats, millet) and, if there is also the occasion, also fruits, of which they are very fond, besides, in certain situations, fresh water snails, larvae, insects and small amphibians and fish.
To meet their diet, voles have the habit of accumulating seeds, nuts, acorns and ponytail rhizomes in special chambers dug in their lair, and then use them in periods of persistent rain (despite having semi-aquatic habits, in fact, during the rains it tends not to move from the den) and during the winter, as it is a species that does not hibernate.
According to the IUCN, the main threats of this vole are related to the mutation of aquatic habitats and water pollution.