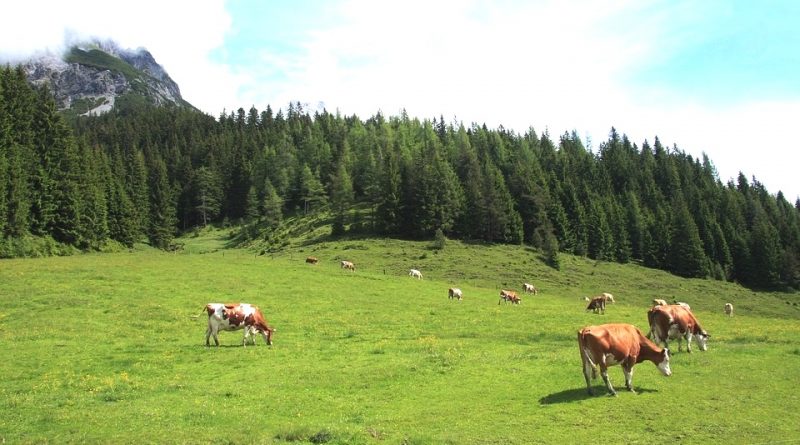 The term pasture refers to the grazing of cattle in the mountains, from altitudes ranging from about 1000 m up to 2300-2500 m above sea level.
The pasture, also called monticazione or summatatura, takes place from the end of May to mid-September, but has a different duration depending on the altitude, exposure, position and vegetation of the pastures (minimum two months: July-August).
Pasture is a very ancient practice (already practiced by the Reti), which responds to economic and technical needs at the same time, both because it allows to exploit the high mountain forage production, unusable in any other way, and because it strengthens the animals and makes it more resistant to infections, particularly tuberculosis.
Although the pastures affect the alpine areas, this practice is also widely used in large areas of the Apennines and on the pastures of the Pyrenees and the Carpathians.
In Italy, the mountain pastures are operated at 600 m a.s.l. and the 2500-2700; it begins with the mountaineering, that is, the ascent to the alp, which takes place between the end of May and mid-June and ends with the demontication, that is, the descent to the plain which takes place at the end of September.

The pasture passes through various phases (transmutes) that are identified with pasture and structures placed at different heights on the same mountain (such as the maggenghi).
Furthermore, on the basis of the administrative organization (private, cooperative, public of a municipal, provincial or state type, etc.) and the management system (rent, management by private individuals, cooperatives, etc.) different economic-organizational.
The pasture can also differ according to the type of livestock used. You can thus have the pasture for cattle (the most common), for sheep, goats, horses or for mixed livestock (including pigs and poultry).
In general, the alpine and pre-alpine pastures host mainly cattle (85% in the first case and about 95% in the second) while the Apennine ones are exploited exclusively by sheep.
The livestock load expected in the mountain pastures obviously differs according to the type of animals; for the entire duration of the pasture, 1.5-2 hectares are needed for each cattle, while a single hectare can feed 4 to 6 sheep.
The pasture, conducted with agroecological techniques, brings considerable advantages to the animals, both from the food point of view (greater nutritional value which is reflected both on the health and on the quality of livestock products), and from that of physical activity (development of muscles , increase in circulatory, respiratory and lung capacity due to rarefaction of the air and increased physical effort) and environmental factors (quality of the breathed air and increase in active radiation with beneficial effects on skin, hair, glandular activity and metabolism).
In addition, the pasture allows the land grazed by animals an enrichment of macro and microelements for the cultivation of agricultural land, primarily nitrogen, useful for plant growth but above all for the contribution of organic substance that gives greater stability to mountain soils. , notoriously arranged on more delicate and complex orographic and morphological systems.