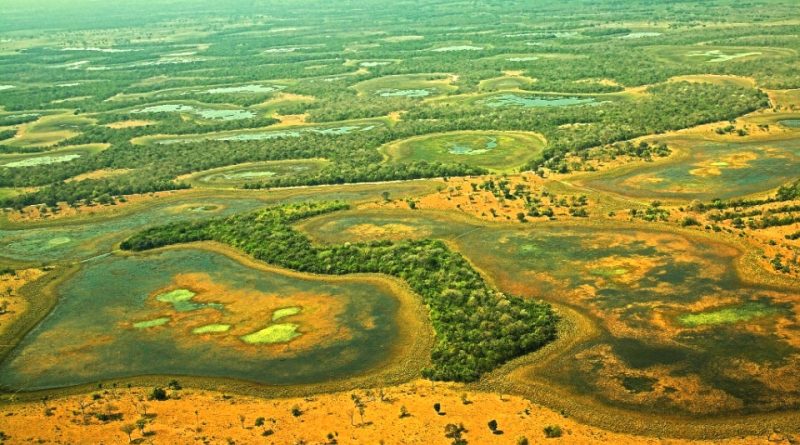 The Pantanal is an area located in the central area of ​​South America located largely in Brazil (in the states of Mato Grosso and Mato Grosso do Sul), and partly in Bolivia and Paraguay. In fact, the Pantanal is the largest wetland in the world.
It is an immense alluvial plain that is subject to periodic flooding and its name from the Portuguese word “pântano”, which means “swamp”, and covers approximately 150,000 square km.
In fact, this immense area for nine months a year, from the beginning of the rainy season and for a certain subsequent period, is submerged by the waters for 80% of its surface.
WWF identifies this area as one of the planet’s ecoregions, belonging to the biome of flood meadows and savannas and is recognized with the code NT0907.
The inhabitants of this region, the pantaneiros, have lived for generations in harmony with the wild nature of this place, feeding on what the area produces and raising livestock extensively.
Most of the Pantanal’s surface is privately owned, but as long as cattle breeding takes place in an extensive way, the risk is limited and the region is still relatively intact.
In September 2001 a portion of the Pantanal territory falling in Brazil, of only 1,350 square kilometers, became part of the Pantanal Matogrossense National Park.
In the Bolivian territory, the Otuquis national park was set up with an integrated natural management area and a total area of ​​just over 10,000 km².
Furthermore, in 2000 the Pantanal was included in the list of biosphere reserves and in that of UNESCO World Heritage Sites.
However, this delicate balance could be jeopardized by the project to build a waterway, which would serve to facilitate communications, the transport of goods and the generation of electricity; this realization could instead completely change the ecosystem and the modification of the Pantanal ecoregion, at least as we know it now.
The Pantanal is considered the ecosystem with the largest number of flora and fauna species in the world.

Flora –
The vegetation of this eco region is unique in the world with species that can only be found here and in a delicate balance with the particular wet system.
Among the 1700 species present, the beautiful jacaranda with amethyst-colored corollas, the pink clouds of the peuva tree in bloom and the yellow ones of the cambarà, the water lilies that bloom among the leaves as large as tea tables of Victoria regia, the expanses of hyacinth d water with violet flowers and shiny and fleshy leaves and many, many flowers of all shapes and colors, especially present in the wet season, from May to September, cheered by butterflies and multicolored birds. 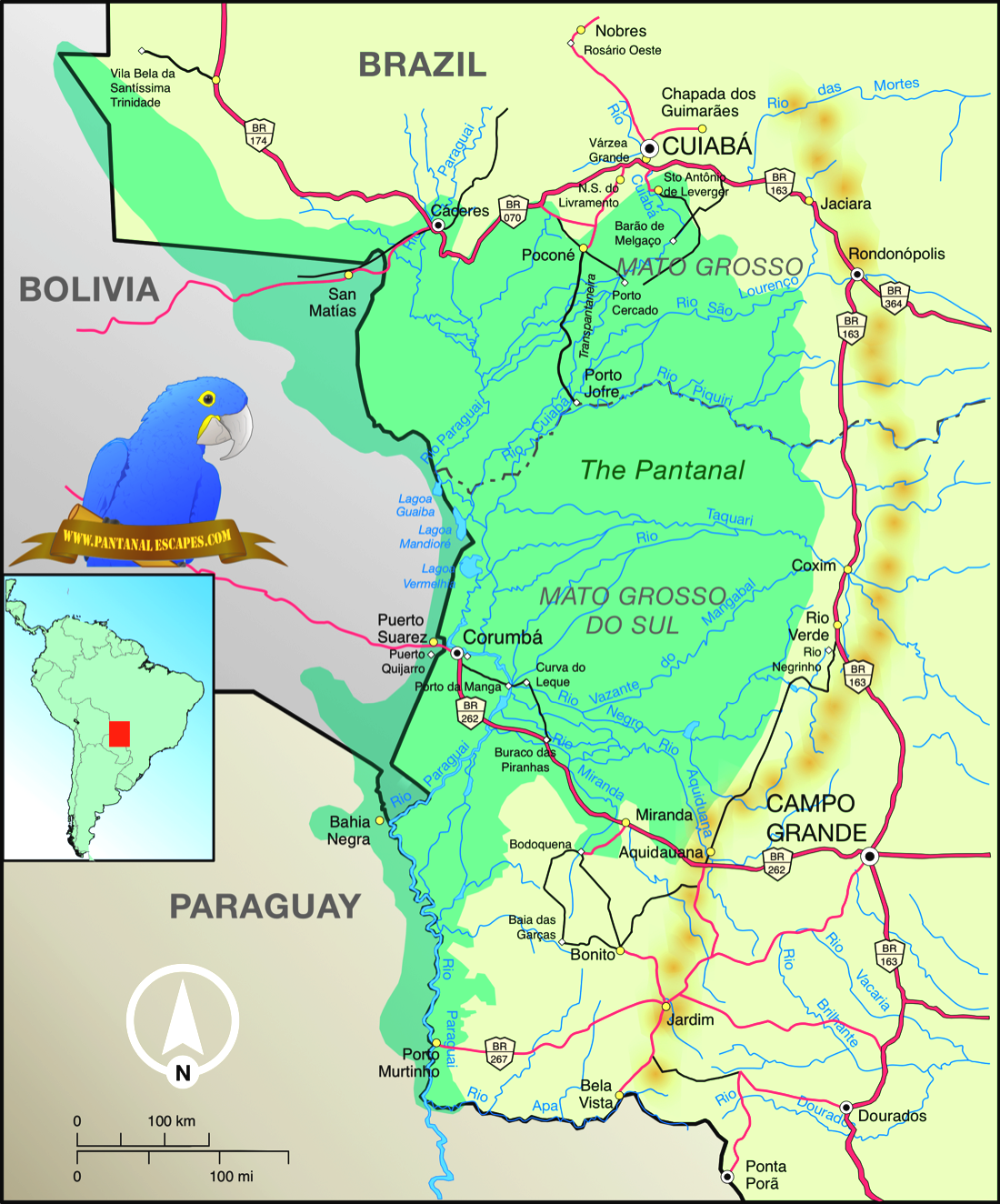 Fauna –
But the Pantanal’s most formidable attraction lies in its fauna. Sailing in a canoe along the various rivers and rivers, when the rest of the territory is flooded and inaccessible (from January to March and from October to December), there is everything to see: on the sandy shores there are plenty of peaceful caimans jacarè, (there are apparently, more than 5 million); in the meanders invaded by vegetation here is the slow and sinuous unfolding of immense anacondas.
During these journeys it is very easy to spot the animals of this region: jaguars, caimans, capybara, giant anteaters, anacondas and hundreds of different species of birds. Very popular here is the red piranha.
On the silt banks, the wavy and frenetic escape of emerald green iguanas is surprising and along the banks the dripping and shaggy emergence of the capybara, the largest rodents in the world. The alouatta howler monkeys chase each other happily on the branches of the riparian forest. And it is not difficult to see small families of the quarrelsome giant otter swimming decisively in search of fish. And then the birds. The muddy jabirù, large white storks with black necks and a showy fire-red goiter, walk on the mud of the banks. In addition, candy pink American spatulas, herons and white egrets and many small camouflage waders lurking among the branches of the riparian forest. Here the great toco toucans are present everywhere and it is easy to see them perched on the branches of the cecropias with geometric leaves. The large macaws roar in flight: the macaw with its carnival red, yellow and blue plumage, the more understated Ara ararauna in its sulfur yellow and cobalt blue livery, a real protected jewel in the great Pantanal nature reserves and the subject of a large WWF restocking operation, the rare hyacinth macaw, indigo blue with golden wattles which today is estimated to be present in no more than 4,800 individuals worldwide, concentrated right in the Pantanal.
In the cerrado, a local term that identifies the tree-lined savannah – an open environment with infinite horizons closed to the west by the low mountains of nearby Bolivia – not unlike that of East Africa, traveling on the no longer muddy paths reserves continuous surprises. Because, unlike the expanses of shrubs and umbrella acacias of Kenya and Tanzania, the manganese blue eyes of the last pools are nestled here in the now dry grasslands.
And it is of course here that all the major exponents of South American fauna meet. To turn in the emerged areas there is the possibility to see the determined and grumpy gait of the magnificent giant anteater, the race of the rare marsh deer and, on the large isolated trees, the small black and white eagle (Spizastur melanoleucus) or the funny and shy ring-tailed coati. Along the slopes, the sight of the friendly armadillos (many of them overwhelmed by cars) and, in the distance, observe the bizarre silhouette of the South American ostriches (nandu), capable of running up to 60 kilometers per hour. However, to discover the largest of South America’s land carnivores, the jaguar, you have to go into the cerradao, a name that defines the most wooded and intricate savannah.