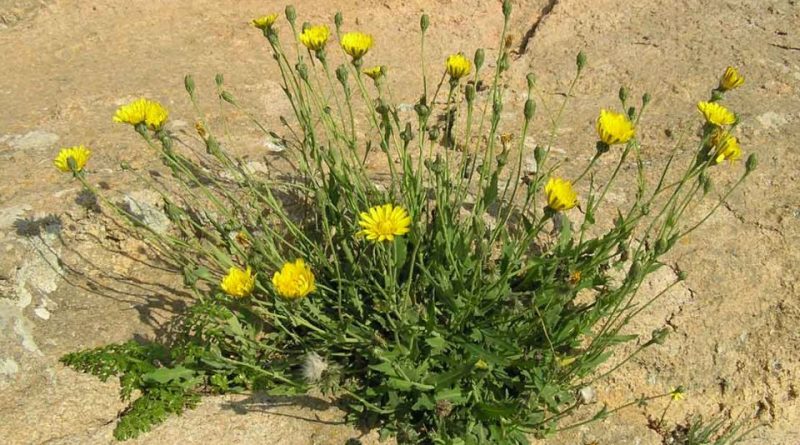 The Common brighteyes (Reichardia picroides (L.) Roth, 1787) is a herbaceous species belonging to the Asteraceae family.

Etymology –
The generic term Reichardia was dedicated to the German physician and botanist Johann Jacob (Jakob) Reichard (1743-1782) from Frankfurt.
The specific epithet picroides comes from the Greek èidos = similar to, and Picrís that is similar to the genus Picris, due to the similarity with some species of this genus which in turn derives its etymology from the Greek Pix-ròs = bitter, unripe.

Geographical Distribution and Habitat –
The Common brighteyes is a Mediterranean species with continuous presence on the territory and quite common both in Europe and in Asia and Africa.
In Italy it is a fairly common species, while outside Italy it is present in some French Alpine departments (Alpes-de-Haute-Provence, Alpes-Maritimes, Drôme, Isère), and in the Massif Central and the Pyrenees.
The habitat is that of the sea cliffs, uncultivated arid, walls and along the streets but also the fields, crops and ruderal areas where it grows mainly on calcareous soils but also calcareous / siliceous with basic pH, low nutritional values ​​of the soil that must to be arid.
It can be found from sea level up to 1200 m. s.l.m .. 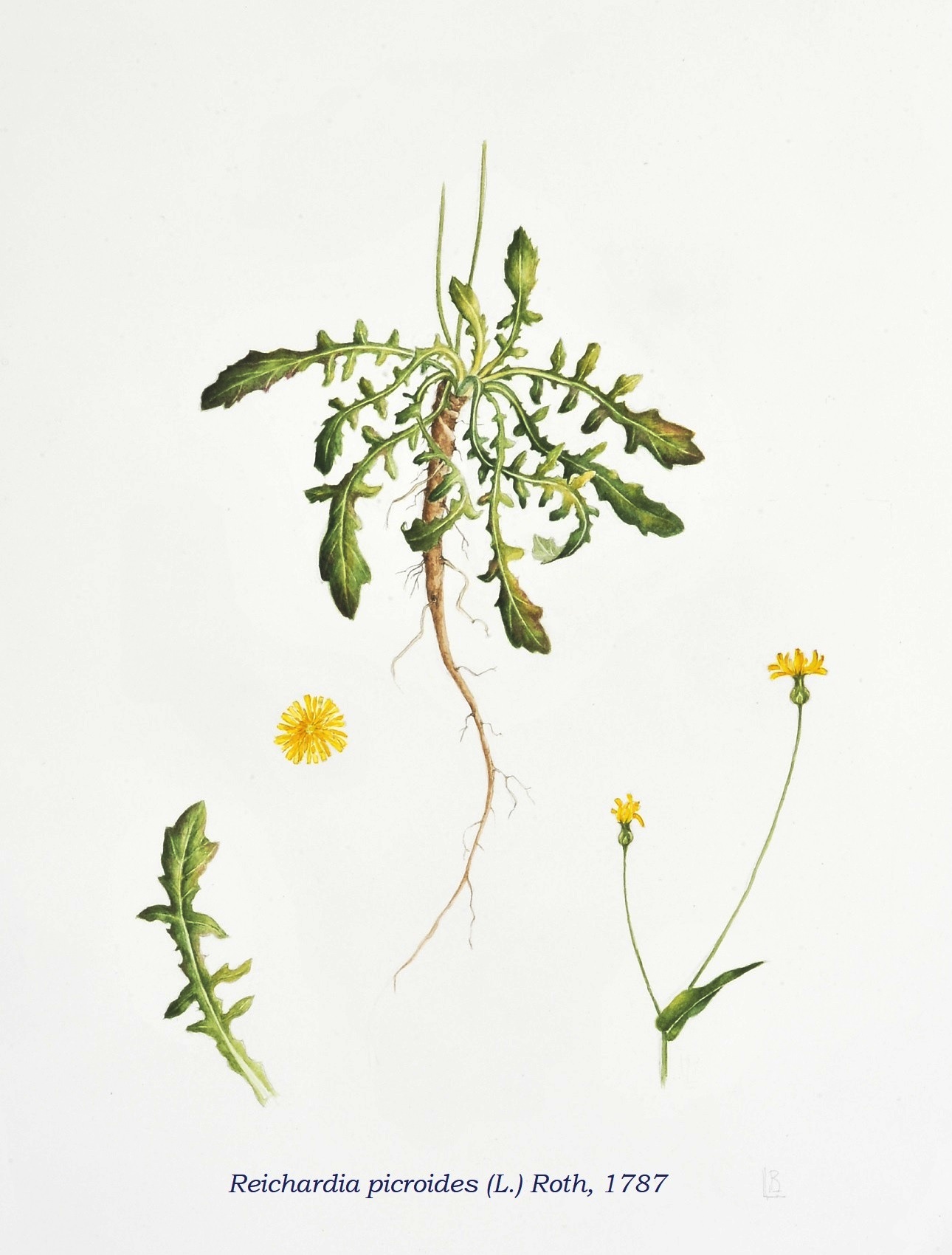 Description –
Reichardia picroides is a perennial herbaceous plant 20 – 40 cm tall, glaucous, glabrous and generally smooth.
The root is woody, elongated and enlarged which contains a sweet latex, from which a more or less smooth basal leaves rosette develops, with a variable shape: elongated-obovate, oblanceolate, whole or variously divided into patent, jagged and ruffled lobes, restricted to the base in a long winged petiole.
In the spring period, erect or prostrate-diffuse, cylindrical-angular, simple stems or with one or two bifurcations are formed, with oblong, sessile, amplessicauli and whole lanceolate leaves, the upper ones reduced.
The inflorescences are racemate with 1 – 5 calatids carried by long monocephalic peduncles, enlarged at the apex, with some sharp bracts at the apex, heart-shaped at the base, and scarce at the margin, similar to the external ones of the envelope.
The envelope is globular – pyriform, more or less strangled, with bracts in several embryonic series, the external ones similar to those of the peduncle and the longer internal, lanceolate, all lacking in the margin.
Bare receptacle (without scouring pads) with yellow flowers, all ligulate, the exterior usually with a dark, brown or purple strip on the lower page.
The antesis occurs all year round and pollination is entomogamous.
The fruits are 2-3 mm cipsele with soft white pappus, the dark external ones with 4 wrinkled ribs, the thinner, lighter, sterile and more or less smooth ones.

Cultivation –
The Common brighteyes is a plant that reproduces by means of seeds following entomogamous pollination.
The seeds falling to the ground, after being transported for a few meters by the wind thanks to the pappus, then with anemocora dissemination they disperse dispersed mainly by the work of insects like ants (myrmecoria dissemination).
To use this plant, the tender leaves of the basal rosette must be collected and cut by cutting them at the height of the collar in order to allow them to grow back.

Preparation method –
Reichardia picroides is perhaps one of the most appetite and sought-after spontaneous plants for use in the kitchen: the most tender leaves of the basal rosette eaten raw are an excellent salad by themselves or with other edible herbs with which they are also used boiled and seasoned with oil and salt or in the preparation of cakes, soups, soups and pies.