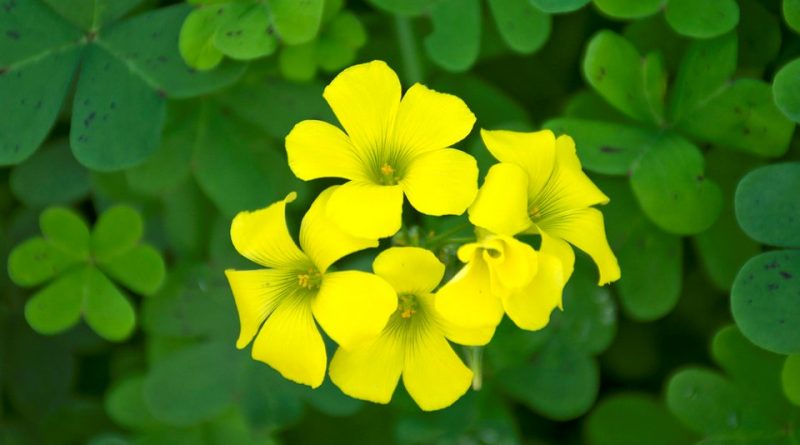 Etymology –
The term Oxalis comes from the Greek acid ýς oxýs and from ἄλς hals sale: for the acidulous taste of the leaves.
The specific epithet pes-caprae, means goat’s foot, from pes pes and from goat goat: due to the shape of the leaves.

Geographical Distribution and Habitat –
Bermuda buttercup is considered a weed as it is a pioneer species, which colonizes other areas, and is native to South Africa.
This plant has developed throughout the Mediterranean basin and in Italy it is present as an adventitia in Liguria and in all regions of the Center-South, including the Islands; its habitat is that of cultivated and uncultivated land, wet and wooded areas where it grows from 0 to 600 meters above sea level. 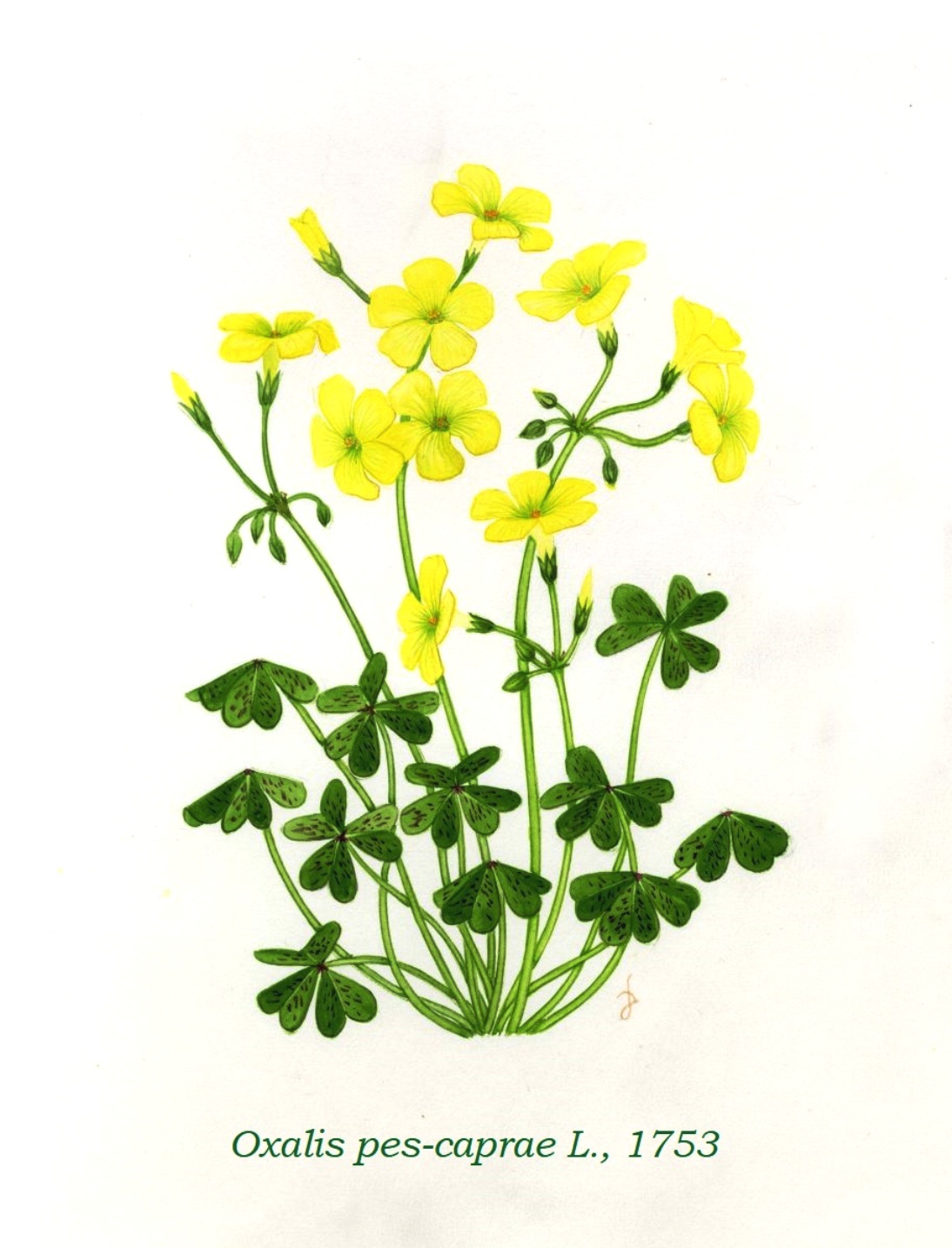 Description –
Oxalis pes-caprae is a perennial acaule herbaceous plant, with sparse hair and underground rhizome, fleshy and with bulbils of 5-8 mm.
The leaves are slightly fleshy with fluff on the margins, dotted on the upper page and with 3 articulated and bilobed segments.
It produces capsule fruits that rarely reach maturity.
In the autumn period, from a somewhat fragile rhizome, a leaf rosette and a series of long stems with yellow flowers develop which give the landscape the characteristic aspect of an intense yellow carpet.
The flower, with the yellow petals, has an actinomorphic radial symmetry (with several planes of radius symmetry), is located on a radical peduncle; its calyx is divided into 5 oval sepals, which hold a corolla formed by 5 petals much longer than the calyx.
The antesis is between November and May.

Cultivation –
Bermuda buttercup is a plant that once introduced into a range it almost always becomes a pest so it is never actually cultivated.
However, its diffusion can easily occur due to rhizomes that produce leaf stems in the autumn.
It is a plant that can easily overcome the harsh winters, with temperatures below -15 ° C, but does not like the summer sun so they should be placed in partial shade, normally under trees.

Uses and Traditions –
The Bermuda buttercup is a species of South African origin which, as reported, was introduced to the island of Malta in 1806 by an English lady from Cape Town and given to Friar Giacinto, a local botanist, but since 1796 it is already cultivated in Sicily, from which it spread rapidly throughout the Mediterranean basin.
It grows in cultivated fields, in uncultivated areas, sometimes even at the edge of the paths, sometimes becoming invasive, with optimum in the Mediterranean area.
The sour taste of the plant derives from the high content of potassium oxalate acid.
The best balsamic period for this plant is that of spring.
Oxalis pes-caprae has nutraceutical, diuretic, purifying, febrifugal properties,
refreshing, anti-inflammatory, and decongestant.
The active ingredients contained are mainly: Oxalic acid bound in saline form and anthraquinones, mucilage and Vitamin C.
The parts used are leaves, stems and bulbs.
Its consumption is however not recommended in cases of kidney stones linked to oxalates.
In the kitchen you can consume fresh leaves, for the pleasant sour taste; they are eaten both raw and cooked, but without abusing.
In medicine, leaves and roots are used as a decoction because they contain refreshing, diuretic, antiscorbutic and astringent substances.
It is useful for dermatoses, abscesses, small oral ulcers and much more.
Popular medicine recommends fresh squeezed juice at the beginning of stomach cancer, against ulcers and cancerous internal and external tumors.
It is contraindicated for kidney disease, lithiasis and gout. Misuse can cause kidney injury and intoxication.

Preparation method –
Bermuda buttercup is a plant whose raw leaves can be used in the kitchen in addition to spring salads, as mentioned. Due to their acidulous taste, leaves and stems can form the basis or become part of accompanying sauces for boiled meats, grilled fish. You can also use the small bulbs consumed after roasting them on the grill, seasoned or not with oil and lemon.