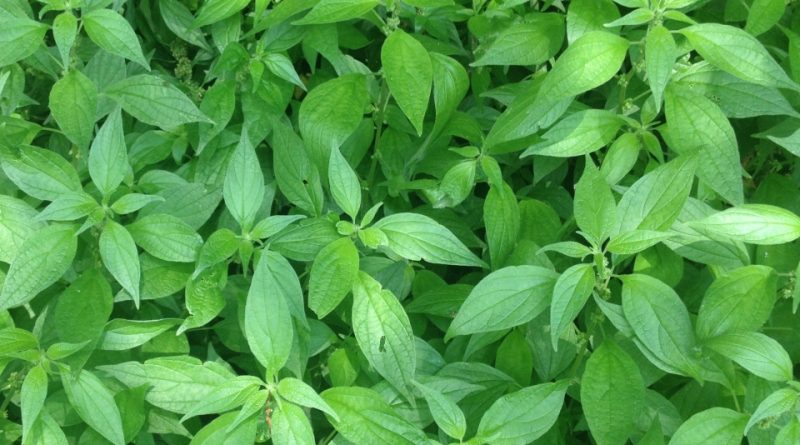 The eastern pellitory-of-the-wall (Parietaria officinalis L.) is a herbaceous species belonging to the Urticaceae family.

Systematic –
From a systematic point of view, it belongs to the Eukaryota Domain, the Plantae Kingdom, the Magnoliophyta Division, the Magnoliopsida Class, the Urticales Order, the Urticaceae Family and therefore to the Parietaria Genus and to the P. officinalis Species.

Etymology –
The term Parietaria comes from páries, paríetis muro: for the environment of growth near or on walls and walls.
The specific epithet officinalis as a plant, according to medieval terminology, from offícina laboratory: plants usable in pharmaceutical, herbal medicine, liquor, perfumery and the like.
The common term vitriolic grass is due to the fact that until a few years ago, this plant was commonly used to clean the inside of bottles and flasks thanks to the microscopic hairs of its leaves.

Geographical Distribution and Habitat –
The eastern pellitory-of-the-wall is a plant, originally from Europe, with a diffusion area that reaches up to the subtropical areas of the northern hemisphere.
In Italy it can be found up to 700 m. sl.lm ..
Its habitat is that of the areas along the roads along the dry stone walls, but also along the hedges and in the woods. 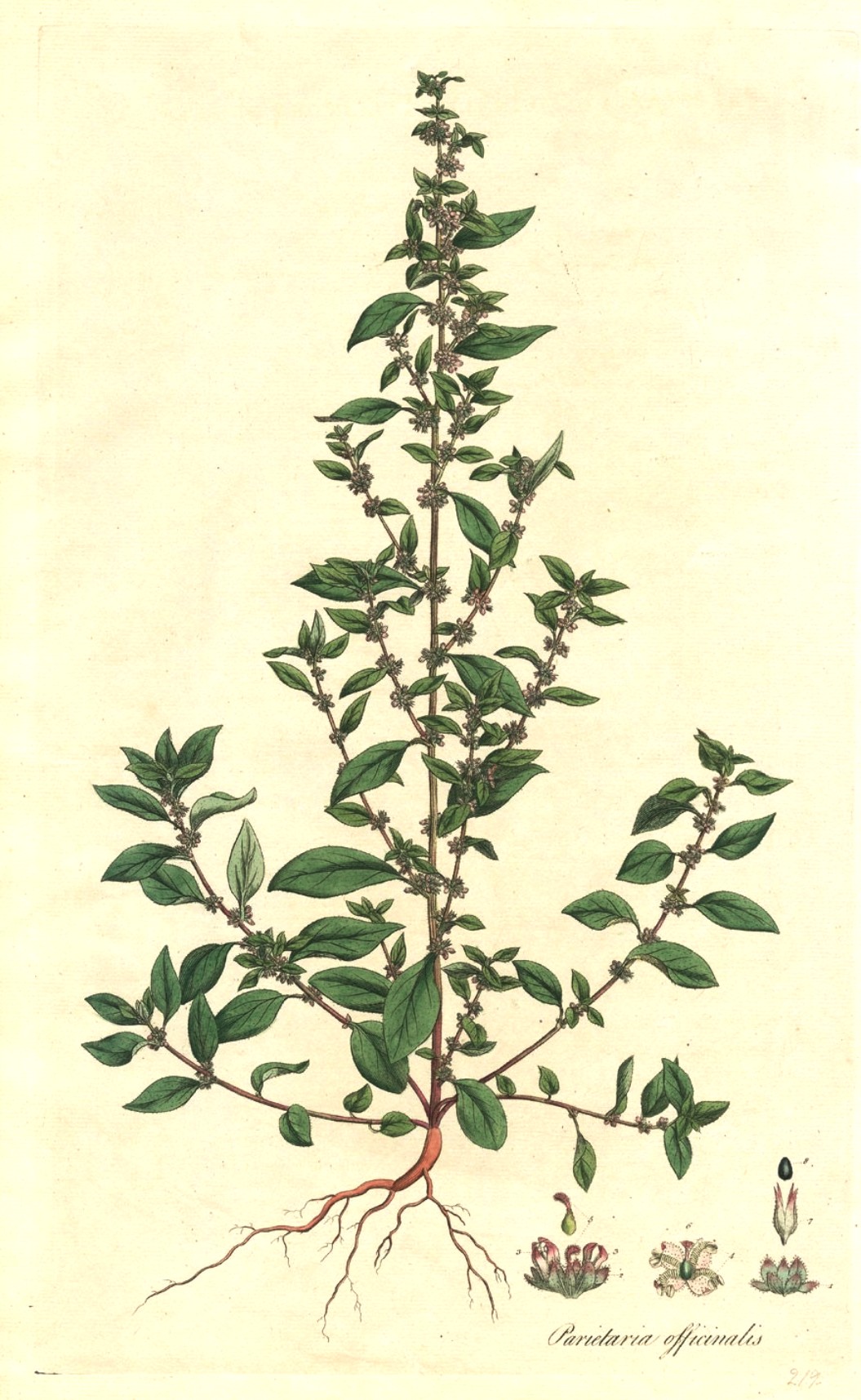 Description –
The Parietaria officinalis is a perennial herbaceous plant that can reach 70 cm in height.
It has an erect, red-brown, cylindrical, hairy stem.
It has oval leaves, lanceolate with whole margin, alternate, petiolate, and equipped on the lower page with microscopic hook hairs.
The flowers are very small, green in color and grouped in glomeruli at the axil of the leaves. They have an envelope divided into four oval parts. In the inflorescence there are three types of flowers: male, female and hermaphrodite ed. The flowers are odorless.
The antesis is between May and October and pollination is anemophilous.
The fruit is a diclesium consisting of an ovoid achene of about 1.2-1.8 mm, bright black, enclosed in the persistent perianth.

Cultivation –
Today this plant is practically widespread everywhere, going to colonize even the rubble deriving from ruined walls, walls of castles, but also stony soils and road edges.
Although it is a plant that grows easily between the walls, giving rise to its carelessness for the soil in which the seeds are deposited, the parietaria is still a plant with its needs. The characteristic for which everyone knows it indicates only its uncommon adaptability, certainly not disinterest in limestone soils, rich in nitrogen and above all shaded.
However, he must not have other plants to contend for the living space, otherwise he succumbs with a certain ease (and that’s why we find it in Spartan places such as between walls and rubble).
The propagation by seed has a very high ease of success if carried out in a seedbed where its growth can be controlled. On the pitch, special care must be taken to eliminate the weeds that take them away.
It can also be grown for industrial purposes and in this case it is more suitable to take some of it from the best mother plants, so as to have a safe, homogeneous and certain product in its composition.
In any case, the plants must be watered in order to allow rapid vegetation, which sometimes also allows a second cut.
Harvesting in the field can be done safely with machinery such as automated mowers, since you do not have to select the part to be picked up, if the root is excluded, which however remains underground.

Uses and Traditions –
The eastern pellitory-of-the-wall is a close relative of the nettle and is also called by the names of wind grass, red leg or wall.
Pollen from Parietaria officinalis and congeners is the cause of one of the most common forms of spring allergy.
In addition to the ancient use of this plant to clean the inside of bottles and flasks, another common use of this plant is to soothe the itching due to contact with the stinging nettle substance, rubbing it without too much force on the injured part.
In popular usage and alimurgia, young spring leaves deprived of the stem and axillary flowers and boiled (10 minutes) are used like spinach. They are also excellent for fillings, omelettes, soups or as a side dish together with other wild herbs.
This plant boasts numerous beneficial properties for our body, but it is also known for the allergic reactions it is capable of causing.
The properties of the parietaria are linked to the presence of various substances concentrated above all in the aerial part of the plant. It is thus used in the treatment and cure of various pathologies and ailments.

Preparation method –
For food uses, the whole plant is used, with the sole exclusion of the root.
Being an edible plain, Parietaria officinalis boasts a long tradition of use in the kitchen. Given its widespread use, there are no supply problems. However, one must be careful when picking it, avoiding the collection on the roadside or in areas contaminated with pesticides. This is however a rule that generally applies to any edible spontaneous herb: portulaca, dandelion, borage, plantain, hypericum, amaranth.
The parietaria has a bitter taste, the most valuable part is represented by the young apexes and the most tender leaves. Before flowering, the whole seedling can be used.
To eat it, it must be cooked, a bit like nettle. Cooking does not diminish its flavor, nor the supply of nutrients. Its richness in potassium nitrate makes the dishes in which diuretics are used, at the same level as a cry of wild asparagus.
Its most common use is to prepare tasty minestrone, which gives it an intense green color. It can also be used in omelettes, soups, salads, as a filling or as a side dish, together with other wild herbs.

One thought on “Parietaria officinalis”