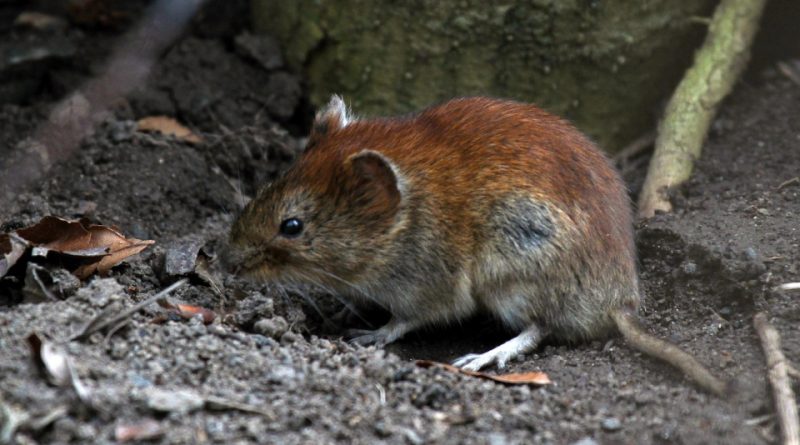 The Bank vole (Myodes glareolus Schreber, 1780) is a rodent belonging to the Cricetidae family.

Geographical Distribution and Habitat –
Myodes glareolus is a rodent with an area that extends from northern Spain in the west to northern Scandinavia, southern Turkey, northern Kazakhstan and the Altai mountains in the east. Some populations of this species are present in Ireland and England.
In Italy the species is very present in the wooded areas of the peninsula, with the sole exception of the Po Valley and the most anthropized coastal areas, where it is very rare or even absent. Instead, it is absent in the islands.
Its habitat is that of wooded areas with thick vegetation and undergrowth of the less hot areas and is very rare or absent in coastal areas, heavily populated or in the plains.
For this reason, this rodent is an excellent bioindicator so that it is also useful in paleoclimatology, as its presence in the fossil state in certain layers of rock indicates that the area in remote periods had very specific climatic characteristics, suitable for hosting this species. 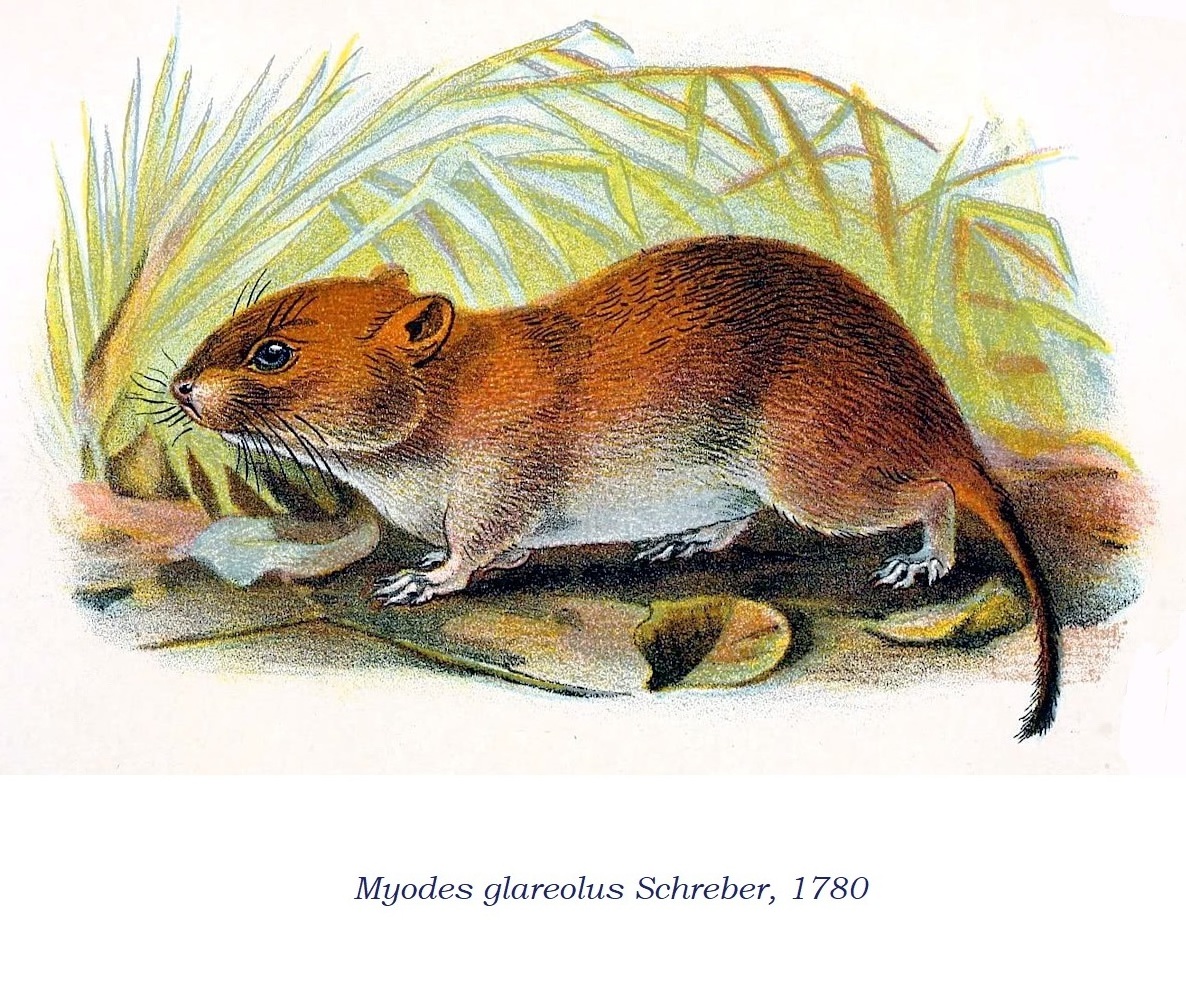 Description –
The Bank vole is a rodent, with not evident sexual dimorphism and with a head-body length of 7-13.5 cm, with a tail length of 3.5-6.5 cm, ear length of 9-15 mm and a weight that oscillates between 12 and 35 grams.
It is recognized for having the upper part of the coat mostly red-brown, but also brownish-yellowish, with grayish sides with reddish hues, while below it has a whitish to gray-whitish color.
The ears are relatively large and protrude from the hair and the eyes are also large and dark in color.
The legs are white in the upper part, the rear foot has 6 plantar pads and has a number of nipples equal to 8.

Biology –
Myodes glareolus is characterized by the presence of males on territories larger than those of females, which is why the territory of each male often overlaps with that of more females, with which it will mate during the reproductive period.
The mating and reproduction period is linked to the photoperiod and fluctuates between April and October, with a peak in June; in particularly favorable years, the duration of the mating period can fluctuate between March and November, even if in some woods in the Alpine areas they can even reproduce throughout the year.
Males tend to mate with as many females as possible, even coming to make small migrations and even females can mate with numerous males but with preference to dominant individuals residing in the vicinity of their territory.
The inspiration period lasts for four days.
The period of pregnancy lasts about three weeks, with the first annual usually lasting less and the following (up to five in a year) that usually last longer; this is because the female can become pregnant again while she is still breastfeeding the previous litter and this probably entails a delay in the implantation of the eggs in her uterus to avoid giving birth again while she is still caring for the puppies.
The female gives birth to three to ten puppies, who are initially blind, deaf and hairless, except for some isolated vibrissa on the muzzle.
The fluff begins to form first on the back starting from the third day of life, but only around 5 weeks of life will the juvenile gray fluff give way to the definitive coat. The hearing of the puppies arrives towards the 11th day of life and the sight towards the 12th day.
Weaning will occur around three weeks of life and sexual maturity around nine weeks, although females are sometimes able to carry out pregnancies as early as the fourth week of life, while males are mature to never reproduce before the eighth week.
It should be underlined how the females, with the approach of childbirth, become very aggressive, especially towards each other and contract the borders of their territory, thus avoiding overlapping part of their living space with that of other females. In addition, the females can kill the puppies of the females of the neighboring territories, for reasons of food availability and the males can kill broods to make the female go to estrus again and mate with them.
These voles have periodic proliferation cycles, most likely related to the presence of predators (predation hypothesis), whose populations fluctuate in a similar way, following the fluctuations of the prey populations.

Ecological role –
These voles are essentially herbivorous animals and in the spring months they feed on herbs, roots and shoots, while in summer and autumn they also feed on fruits and seeds, together with nuts, berries, wheat, barley and grass seeds. . Throughout the year, the animal can also feed on insects and larvae, snails and other small invertebrates, which however never exceed one third of the total food ingested by the animal.
Due to its diet, in the summer, the animal can also double its weight according to the greater amount of food available, and then return to its healthy weight during the winter, when the food available is much scarcer. In addition, although infrequent, this vole can store seeds and grains in periods of abundance inside the blind bottoms of its galleries.
Myodes glareolus are social animals and habits that alternate periods of rest and activity during 24 hours and that move in a well-established territory that never oscillates under the diameter of about 45 meters from the center of its den; in general, the total hours of activity of the animal fluctuate from two to six depending on the season, spread over 3-9 active periods alternating with rest periods, with peaks of activity during summer and winter and minimum values ​​during spring and autumn. These habits are related to the presence of food, competition with other rodents and other environmental factors.
The refuges where they spend their moments of rest are characterized by interwoven tunnel systems, sometimes even superficial and present under the layer of leaves or snow. The dens are built on the ground, among dead leaves or in hollow trunks: the animal in any case makes it comfortable by stuffing it with leaves, moss, animal hair and vegetable fibers.
These animals as well as moving in the thick of the undergrowth, where they prefer areas with ferns or brambles, which offer protection and food, often climb trees, which makes them more easily sighted than other voles. It is not uncommon for these rodents to use a bird’s nest on some tree as their refuge.
Due to their presence, in areas where populations reach considerable densities, Myodes glareolus are considered harmful animals, as they tend to damage crops and gnaw the bark of young trees, usually larches and elderberries, leading to death.
The average life expectancy of these animals in the wild is around a year and a half: in captivity, however, some specimens lived up to 12 years, as they are not subject to the presence of numerous predators.
According to the IUCN this vole does not present particular conservation problems and recent studies would classify it as the most abundant animal in Central Europe.