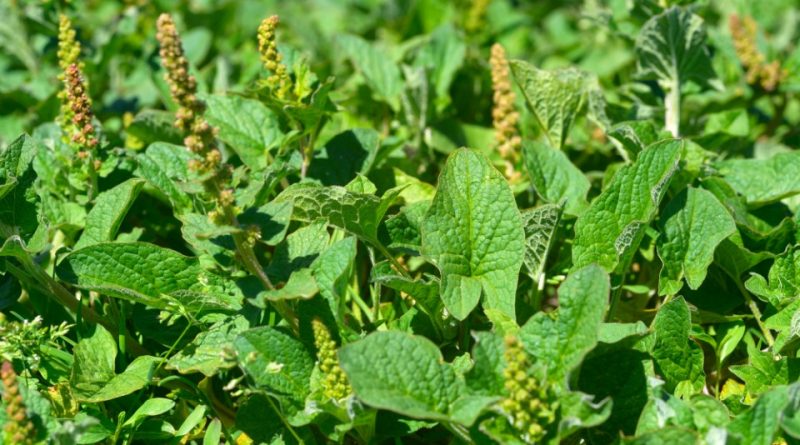 Etymology –
The term Chenopodium comes from the Greek χήν chén oca and from πóδιον pódion foot: in reference to the shape of the leaves.
The specific bonus-henricus epithet, according to some texts has been attributed in honor of Henry IV of Navarre (1553-1610), protector of botanists, for the success that this plant had during his reign saving the population from famine. According to some, the specific name could refer to the god of the house for the “habitat” of plant growth near the houses, or even to the legend of the “Poor Henry” who, suffering from leprosy, would have been cured of this plant, very common in the mountain meadows and pastures, and well known by alpine populations.

Geographical Distribution and Habitat –
The Farinello buon-enrico is a species native to the mountainous areas of Europe, where it is a plant spread throughout the continent and is present in other parts of the world from Siberia to North America.
In Italy it is present on the whole territory and its habitat is that of mountain huts, of uncultivated or ruderal places, where it grows above all in areas with abundant nitrogen fertilizers, above all from 500 up to 2100 m a.s.l.
The preferred substrate is both calcareous and siliceous with neutral pH, high nutritional values ​​and with dry soil. 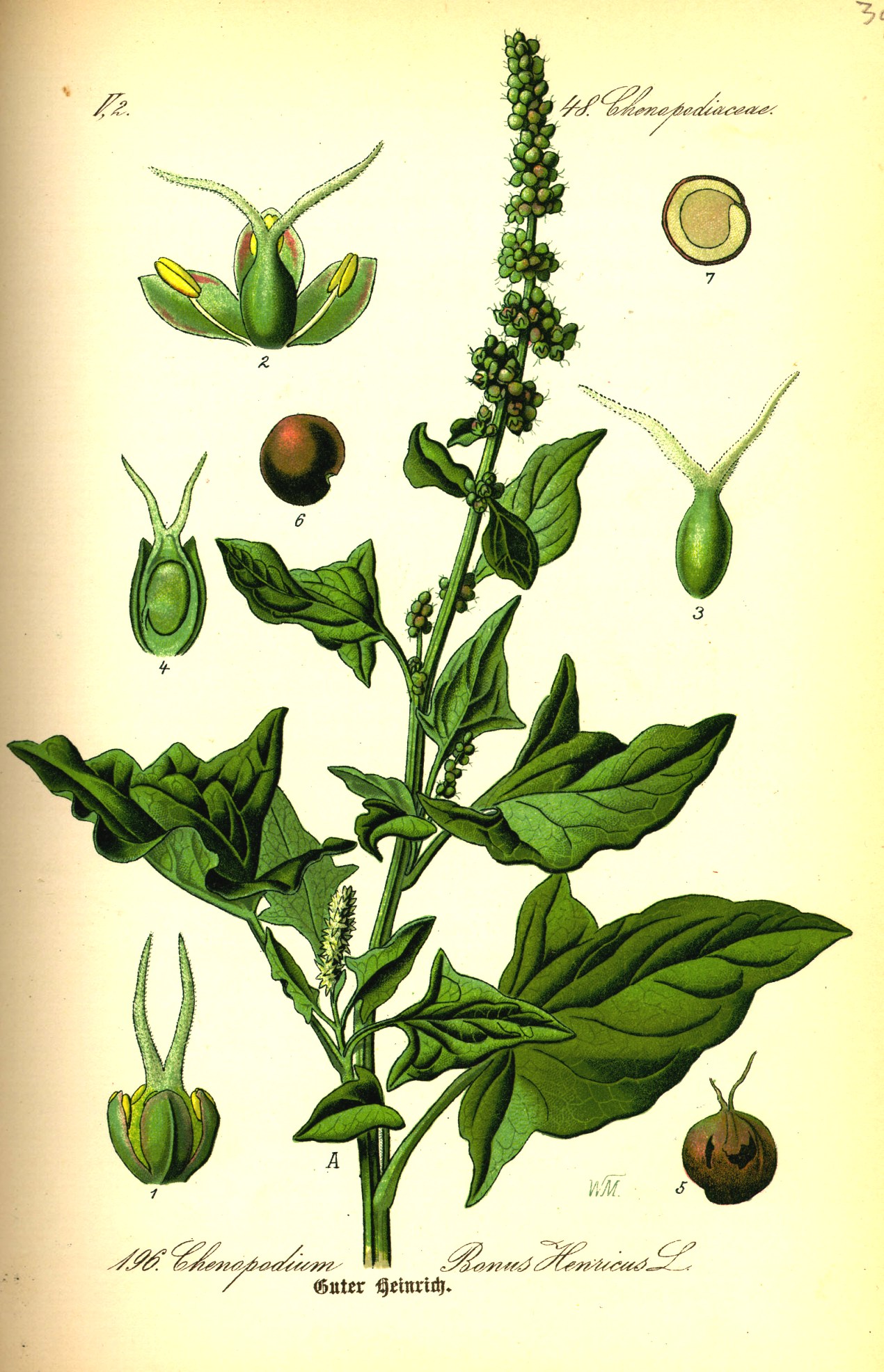 Description –
Chenopodium bonus-henricus is a perennial herbaceous plant that can grow between 20 and 70 cm, which presents itself with a floury and sticky appearance due to the presence of numerous vesicular hairs.
The plant also has a thick rhizome and an erect or ascending stem, striated and leafy, branched from the base.
The basal leaves have a long petiole, 10-20 cm and are triangular in shape and astate at the base with two angles pointing downwards; they have whole and slightly wavy margins, with a dark green upper side and a light and floury bottom. The bracts are whole from ovate to lanceolate.
The flowers are gathered in an inflorescence with an elongated terminal spike, bracted and branched in the basal part, sometimes reflexed, brownish red at fruiting, formed by glomeruli of small greenish brown flowers, inconspicuous and dimorphic: the hermaphrodite terminals with 5 tepals and 5 stamens, the hermaphrodite or female sides with 3-5 tepals and 2-4 stamens, all tepals are welded to the base and rounded in the back. Super-unilocular ovary with a single ovum and surmounted by a bifid stigma.
The antesis is generally from July to September, although on the heights it also anticipates in May-June.
The fruits are obovoid, ± smooth acrosarchi. 1-2 mm Ø obovoid seeds, generally vertical, black or dark brown, shiny, wrinkled, with rounded edges.

Cultivation –
The Farinello buon-enrico is a plant that although spontaneous and sometimes even weed in the presence of excessive nitrogen fertilizers, can be grown or introduced into the company as a plant of interesting food use.
For details of the cultivation technique you can consult the following sheet.

Uses and Traditions –
The generic name of this plant is mentioned in Pliny and used since ancient times especially in times of famine.
The Farinello buon-enrico is in fact a plant known since ancient times (it was widely cultivated by the English until the 18th century) and appreciated for its nutritional value, often collected and boiled and consumed in various forms in central Italy. Formerly considered a poor food, it is today a highly sought after spice and therefore it is often the subject of indiscriminate collections. It is cooked like a common vegetable, boiled or fried in a pan. Sprouts or immature buds of young plants are preferred.
It is in fact an edible and officinal species due to the high content of iron and other salts and vitamins; it is an excellent demineralizer and is therefore a good tonic, anti-anemic, laxative and purifying, however, due to its oxalic acid content, it is not recommended to consume people suffering from stones, arthritis and rheumatism.
Its leaves, due to their emollient effect, are indicated to mature boils and abscesses and cooked briefly in olive oil for compresses on sunburns and sores.
The Chenopodium bonus-henricus contains some substances of particular interest such as: an essential oil called “essence of chenopodium”, they also contain betalaine and other substances such as iron and vitamin B1. It also contains saponins and oxalic acid. The quantities of these substances in the plant are small, but an exaggerated consumption of the leaves in certain individuals can create problems. Problems that can increase if plants are harvested on nitrogen-rich soils.
Among the healing properties, it should be remembered that it is an herb that is emollient, laxative and deworming. As mentioned, it should not be taken by people with kidney failure or rheumatism, as it would aggravate this condition. A poultice obtained from the leaves was used to clean and heal chronic wounds, burns and abscesses. The seeds are a mild laxative, suitable for children.
Of this plant you can use and consume especially the leaves and possibly the rhizome, the flower shoots and the seeds.

Preparation method –
Del Farinello buon-enrico, which belongs to the same family as the spinach, its leaves can be used in the same way. Tender spring shoots are eaten like asparagus and seeds can be used to make flour
In the kitchen you can use raw young leaves seasoned with oil, pepper, lemon juice and with the addition of walnuts they form an excellent salad.
In the summer, the leaves boiled briefly in salted water are suitable for the same uses as spinach, particularly valuable in the fillings, but also in the minestrone, butter, omelettes.
The floral shoots can be consumed like asparagus.
In the mountain hinterland of western Liguria it is widely used in the kitchen, especially in the fillings of ravioli, green cakes, panzarotti, omelettes, baked goods, etc.