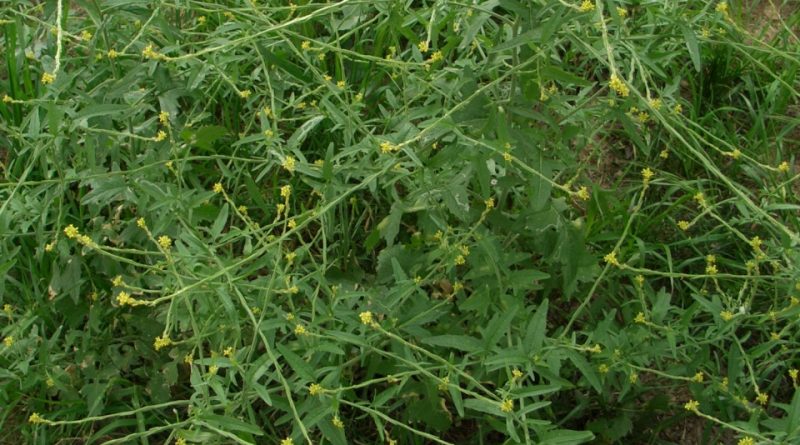 The Hedge mustard, known as Common crow grass or Singing grass (Sisymbrium officinale (L.) Scop.) Is a herbaceous species of the Brassicaceae family.

Etymology –
The term Sisymbrium comes from the Greek σισύμβριον sisýmbrion, an aromatic plant mentioned by Theophrastus, Aristotle, Aristophanes.
The officinal specific epithet as it is a laboratory plant, a medieval term for plants usable in pharmaceuticals, herbal medicine, liquor stores, perfumery and the like.

Geographical Distribution and Habitat –
Hedge mustard is a plant of Eurasian origins with diffusion from Europe to Japan but which we also find in North Africa. Today, although with some gaps, it is present in almost all areas of the world.
Its habitat is that of uncultivated land and close to population centers, the edge of paths and roads, ruins, throughout Europe and Africa from 0 to 1000 meters but which we can find up to 2400 meters above sea level. 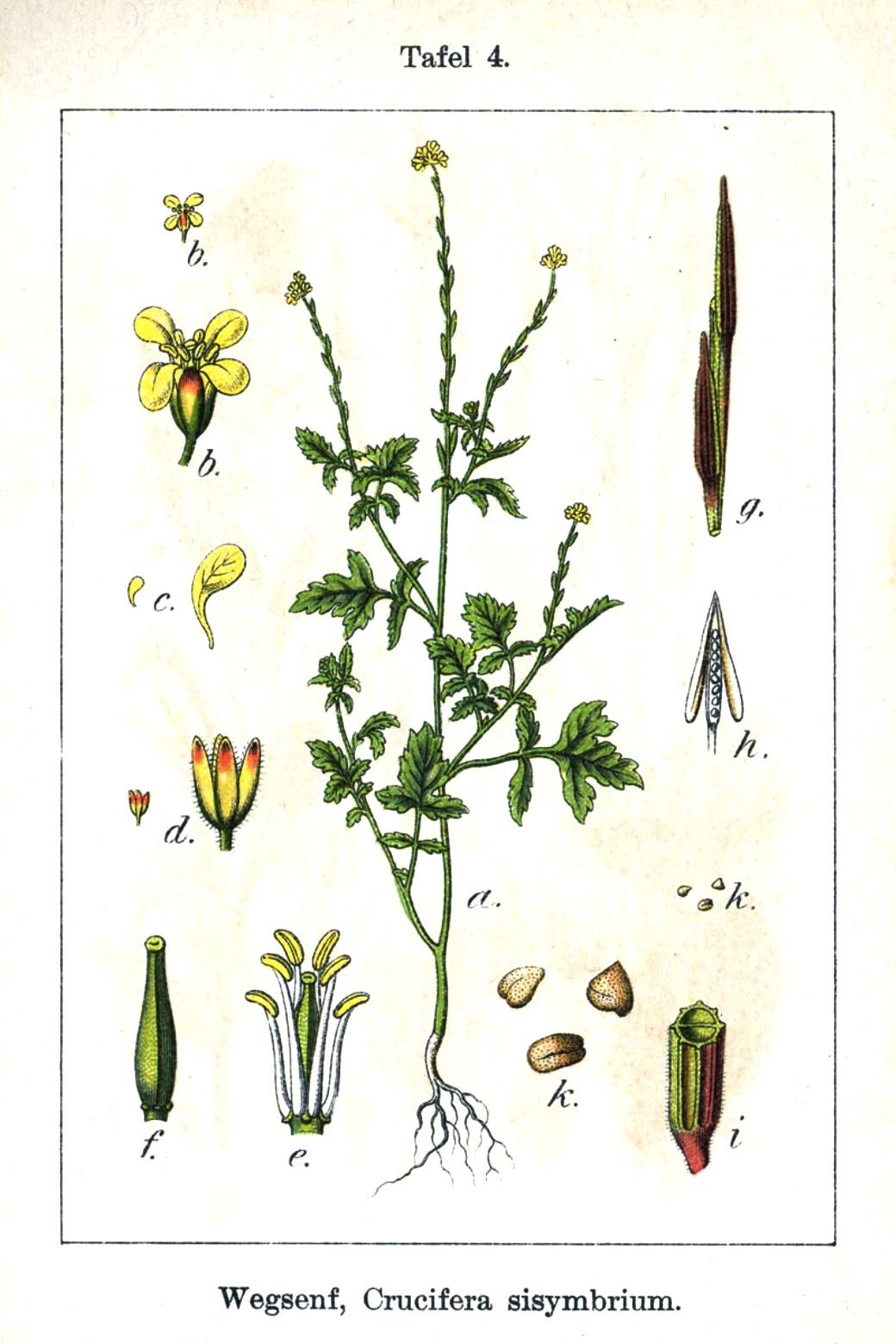 Description –
The Sisymbrium officinale is an annual herbaceous plant with a single caule and with the presence of taproot and white color that grows on average between 30 and 90 cm.
The stem is erect, with patent ramifications or erect-patents at right angles, rigid and opaque or violet green in color and with scattered hairs of 1 mm.
The basal leaves are petiolate, arranged in a rosette, pinnate ± lirate with oblong – obovate segments, with longer and engraved – toothed terminal lobe (2 – 3 x 6 x 12 cm); the intermediate ones are semiamplessicauli with 2 ± hairy lateral lobes, toothed and up to 5 cm long; the upper leaves are amplessicauli, generally astate with oblong-lanceolate terminal lobe and 2 patent side lobes.
The inflorescence is spiciform, in a bare raceme, terminal, dense at the antesis and ± lax at the fruiting.
The fruiting peduncles are close to the caule, enlarged, densely hairy or sometimes hairless (2 mm) ± as much as the siliques.
It has 4 erect-patent sepals of about 2 mm, with sparse hair and 4 light yellow petals and 3 – 4.2 mm long; there are 6 stamens; the exteriors of 2.2 – 2.5 mm, the intermediate ones of 2.5 – 3 mm; the anthers are yellow of 0.4 – 0.5 mm.
The antesis is between May and July.
The fruit is a siliqua with a peduncle close to the caule, erect in a cylinder-conical shape with 2 trinervated valves and covered with dense hair (9) 13 – 17 (25) x 1.5 mm; at maturity it opens along the 3 ribs, freeing from each of the 2 valves 1 rank of brown seeds (8 – 14 (20) which measure 1 – 1.3 x 0.6 – 0.8 mm.

Cultivation –
Hedge mustard is a spontaneous plant that lives in ruderal environments and on the edge of paths or ruins but which almost never represents characteristics of weed in Europe while it has become so in the American continent where it has rapidly spread as a weed species.
In some parts of Europe it is cultivated for both leaves and seeds.

Uses and Traditions –
Sisymbrium officinale is a plant that has an active ingredient inside: erisimo, whose use is very ancient, in fact in popular medicine it has been used systematically as a decongestant of the pharyngeal, antidaphonic, diuretic, expectorant mucosa. These properties can be traced back to the presence of inirosin (sulphured essence), mucilage, dextrin, pectin, glucosides.
The Greeks believed it was a medicine against all poisons.
In ancient times, this species is also called “herb of the singers” for the use they made of white vocal choirs for the little ones; there is evidence of this since the Renaissance period; according to the botanist Jacques Dalechamps (1513 – 1588) the doctor Guillaume Rondelet, with this plant, managed to heal one of the boys in the choir. It is commonly cultivated in Europe for leaves and seeds where it is often used as a condiment especially in the Northern areas, such as in Denmark, Norway and Germany.
Inflorescences and leaves are used in herbal medicine.
A yellow dye can also be obtained from this plant.
Larvae of some Lepidoptera commonly feed on it, such as the cabbage keeper (Pieris rapae (Linnaeus, 1758)).

Preparation method –
Hedge mustard is used both in the kitchen and in the healing field. The leaves have a bitter taste of cabbage and are used to flavor salads or as a cooked vegetable. The seeds are used in Europe in the production of mustard.
The infusion combined with water is an excellent skin decongestant to be used during the bath.