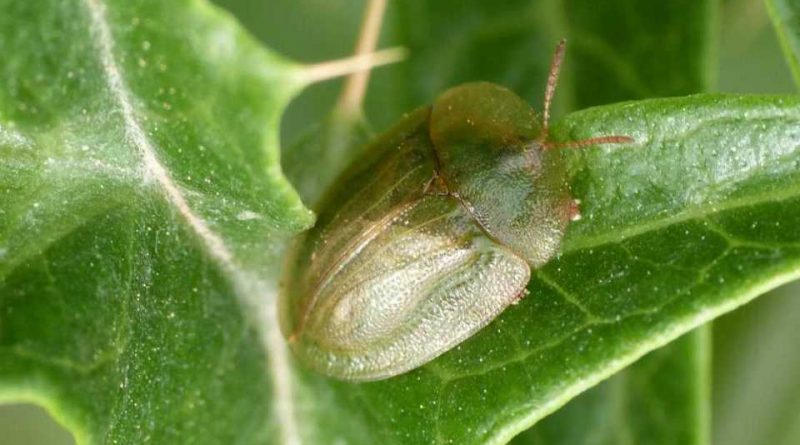 The Cassida of the artichoke (Cassida deflorata Suffiran, 1844) is a beetle belonging to the Chrysomelidae family.

Geographical Distribution and Habitat –
Cassida of the artichoke is an insect that is found in an area between Africa, Algeria and Morocco, as well as in European countries such as France, Italy, Portugal and Spain.
In Italy it is present mainly in central-southern areas and islands.
This species is a phytophagous that feeds on plants of the Asteraceae family, including Cardo, Artichoke, Arctium lappa, Carduus tenuiflorus, Cirsium dyris, Jacobaea maritima and Silybum marianum.

Morphology –
The adults of the deflated Cassida are 8-9 mm long, light green in color.
The larval stages are characteristic for the yellowish color, brown speckled in the dorsal part, but above all for the typical thorny processes that adorn their whole body.

Aptitude and biological cycle –
The Cassida of the artichoke overwinters as an adult in various shelters near the farms.
Once in the spring, the adults go to the artichoke fields or the plants they feed on.
The larvae are born from the spring oviposition of wintering adults. These larvae mature in the period of May and originate, in the summer, the new adults who after a period of latency in the summer can resume a certain trophic activity in the autumn and then winter in the winter.
The insect therefore makes only one generation per year.
The adults of this beetle damage the vegetation by pricking it. The larvae accentuate the damage by feeding on the leaf mesophyll causing the typical skeletonization as they respect the epidermis and the leaf veins.

Ecological role –
The Cassida of the artichoke although living on different Asteraceae can create particular economic damages to the Cardo and the Artichoke.
In fact, as mentioned, adults and larvae perform erosions on the leaf parenchyma, respecting the opposite epidermis and ribs. The strongly attached leaves dry out with consequent negative repercussions on the vegetative activity and on the growth of the young plants.
The control of this Cassida is carried out at the onset of the first infestations by wintering adults or by larvae during the spring period. To decrease the infestations it is necessary to adopt some agroecology techniques, such as the decrease of nitrogen fertilizers (favoring the organic ones), the combination with other crops, a rotation that does not return artichoke and thistle too often to the same areas and the general increase in biodiversity company and district.
The use of pesticides proves, in the long run, a boomerang of difficult resolution for the general alteration of the biocoenosis and the balance between various insects and animals that feed on these insects, like some birds.