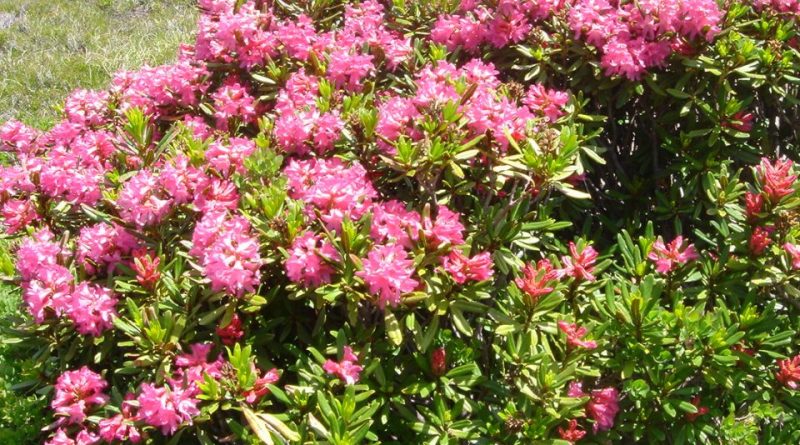 Alpenrose (Rhododendron ferrugineum L.) is a shrub species belonging to the Ericaceae family.

Systematics –
From the systematic point of view it belongs to the Eukaryota Domain, United Plantae, Magnoliophyta Division, Magnoliopsida Class, Ericales Order, Ericaceae Family and therefore to the Genus Rhododendron and to the R. ferrugineum Species.

Etymology –
The term Rhododendron comes from the Greek ῥόδον rhódon rosa and from δένδρον déndron tree: for the color of the flowers of many species of this genus.
The specific epithet ferrugineum comes from ferrum ferro: ferrugineo, brown red color, rust color.

Geographical Distribution and Habitat –
Rhododendron ferrugineum is an endemic species of southern and central-western Europe, forming populations in the mountainous areas (Alps and Pyrenees) of Spain, Andorra, France, Switzerland, Austria and Germany. In Italy it is present in the Alps and Tuscan-Emilian Apennines.
Its habitat is that of the mmacereti, of the prairies of altitude, in the ledges and on slopes with prolonged snowfall, with optimum on siliceous substrates in the larch forests of the subalpine zone. It frequently overcomes the limit of the trees colonizing the alpine meadows: extended populations preferably cover the fresh slopes and exposed to the north with prolonged snowfall. 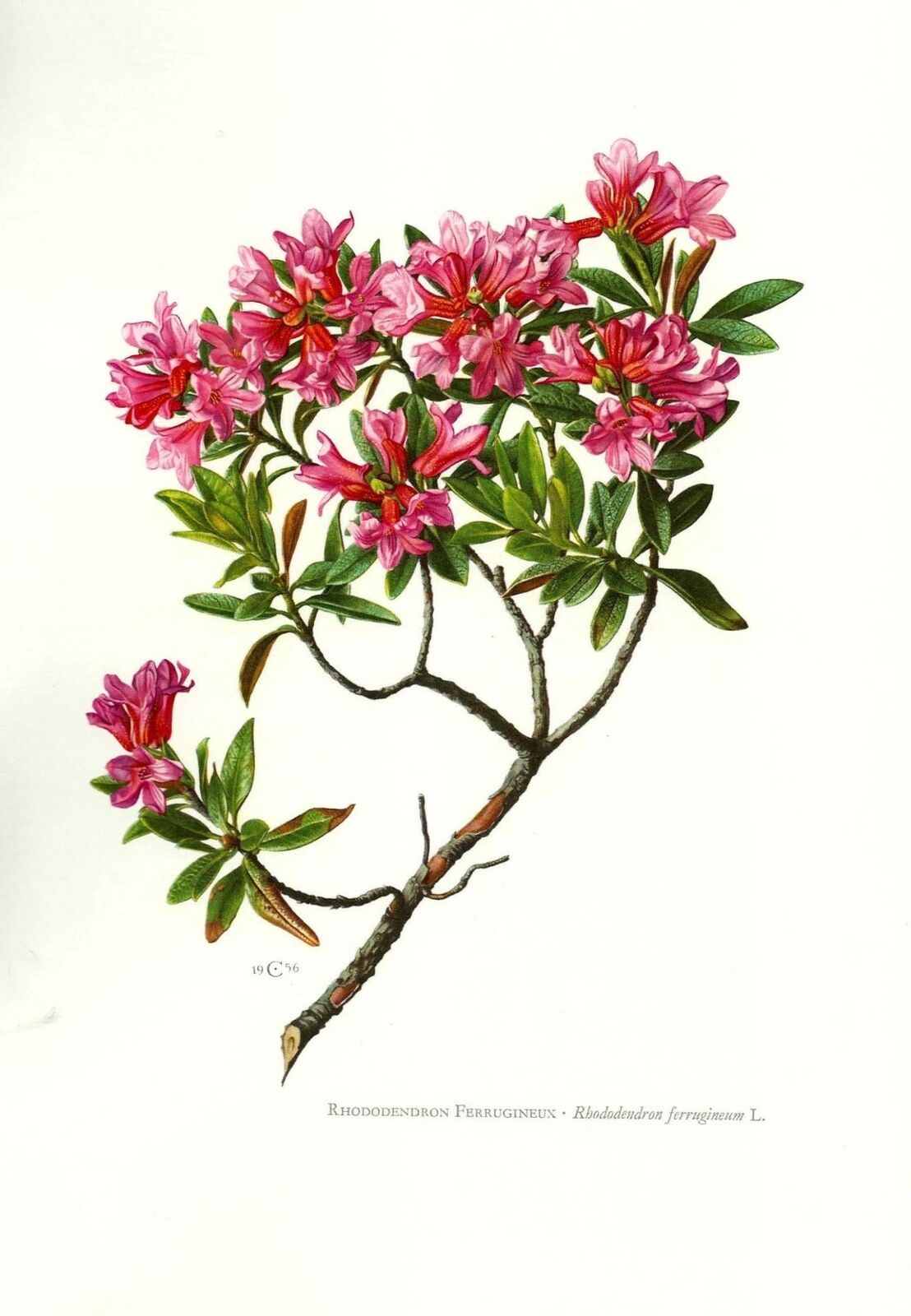 Description –
The Alpenrose is a plant that grows in the form of a shrub, evergreen and that can reach a maximum height of 1.5 m.
It has a superficial root system with very thin roots.
The branches are fragile erect or ascending.
The leaves are lanceolate, tending to elliptical, 2.8 – 4cm, simple, glabrous, glossy and leathery on the upper side.
At the apexes of the branches are placed both small vegetative buds, which will give life to new branches in the period of growth, and the largest flower buds. The latter contain the flowers protected by leathery pearls.
The flowers are grouped in racemose inflorescences with corimbo with a central rachis on which the floral peduncles are grafted.
The corolla is generally bright pink and rarely white, with small yellow spots on the outer surface.
The petals are 5, welded at the base and free at the end giving a bell-shaped and narrow shape to the flower. The androceum is composed of stamens with pale yellow anthers supported by curved peduncles upwards.
The flowering period is between June and July.
The fruits are small ovoid capsules, 4-11 mm, with 5 valves, which dry out when ripe and divide according to five septa spreading the seeds.
The seeds are minute, flat, winged of 1 mm.

Cultivation –
The Rhododendron ferrugineum can be grown during the summer, outdoors as long as it is placed in the shade and moist, during the cold months (which correspond to the period of intense flowering) it can also be kept indoors but not in direct sunlight. alone and not next to heat sources.
In order to vegetate well this plant needs a temperature between 8 ° C and 16 ° C.
The substrate must be kept constantly moist with water without being limestone because otherwise the leaves will turn yellow and fall off; furthermore we recommend a soft, acidic, limestone-free substrate.
The rhododendron pruning is done in mid-spring with a slight shortening of the branches. The plant must then always be kept symmetrical.
The recommended multiplication is by cuttings and is carried out between July and September by taking buds, about 10 cm long, herbaceous or semi-woody with azaleas, and placing them to root in a box with peat and perlite.
The cuttings are cut under the node in an oblique direction then they are arranged in a compost of peat and perlite to a depth of 1,5-2 cm and to a temperature around the 20 ° C. the soil should always be slightly damp.
It takes a month for the cuttings to develop the root system, then they are put in the open field or in pots with a diameter of about 8 cm with peat substrate, pine needles and heath land. After 20 days the flower bud will come out and must be removed, at the same time a topping is made.
If kept in small pots, after two months it is repotted in larger pots, about 15 cm in diameter with a soft and porous substrate.

Uses and Traditions –
The Alpenrose shares the common name of “rose of the Alps” with another very similar which is the Rhododendron hirsutum.
The leaves of this plant contain glucosides which have been the cause of poisoning of horses, sheep and other herbivores. By macerating the galls produced by the Exobasidium rhododendri mushroom in oil, the famous “marmot oil” is obtained, considered effective against rheumatic pains and as a vulnerary.
It is a melliferous plant and along the Alpine range there is an exclusive production of pure rhododendron honey; since the high altitudes do not allow the survival of beehives throughout the year, this production is based on nomadic beekeeping: the honey is very light, slightly acid. In the past, dry rhododendron branches were used as brooms and milk filters.
Rhododendron ferrugineum is rightly considered a symbol of alpine flowering. It often covers the mountain slopes with a beautiful aurora red color.

Preparation Mode –
From this plant, especially from the leaves, as from other rhododendrons, glucosides are extracted which boast antiseptic and antirheumatic properties and substances which are used as stabilizers in color photographic printing.