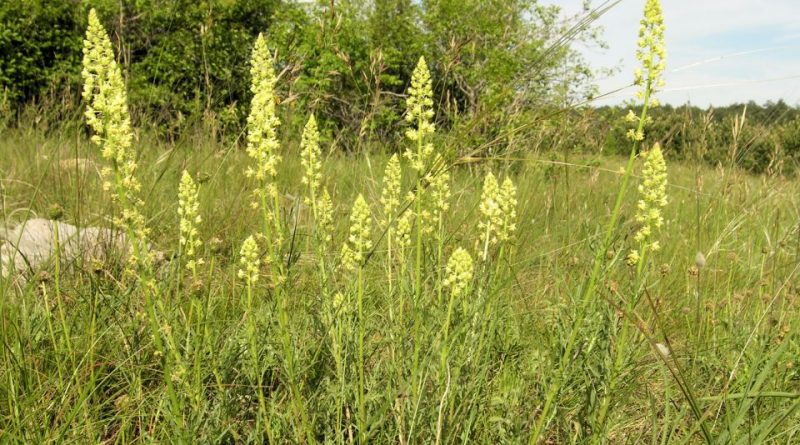 The dyer’s rocket (Reseda luteola L., 1753) is a herbaceous species of the family of the Resedaceae.

Etymology –
The term Reseda derives from resédo calmare, guarare: name attributed by Pliny to a plant of this genus for its medicinal properties.
‘Specific epithet luteola is the diminutive of yellow lúteus: yellowish, yellowish in color.

Geographical Distribution and Habitat –
The Reseda luteola is a plant with an originally Mediterranean distribution elsewhere of ancient introduction (acheophyte), present in all regions of Italy, but more frequent in the central-south. It grows in rude pioneer and patchy vegetations, at the edge of roads, in abandoned cultivated areas, in flowerbeds and landfills, along railway embankments, on subarid soils, from sandy to clayey, rich in skeleton, bases and nitrogen compounds, on calcareous substrates, from sea level to the lower montane belt.
Today it is widespread in Eurasia, North Africa and North America. 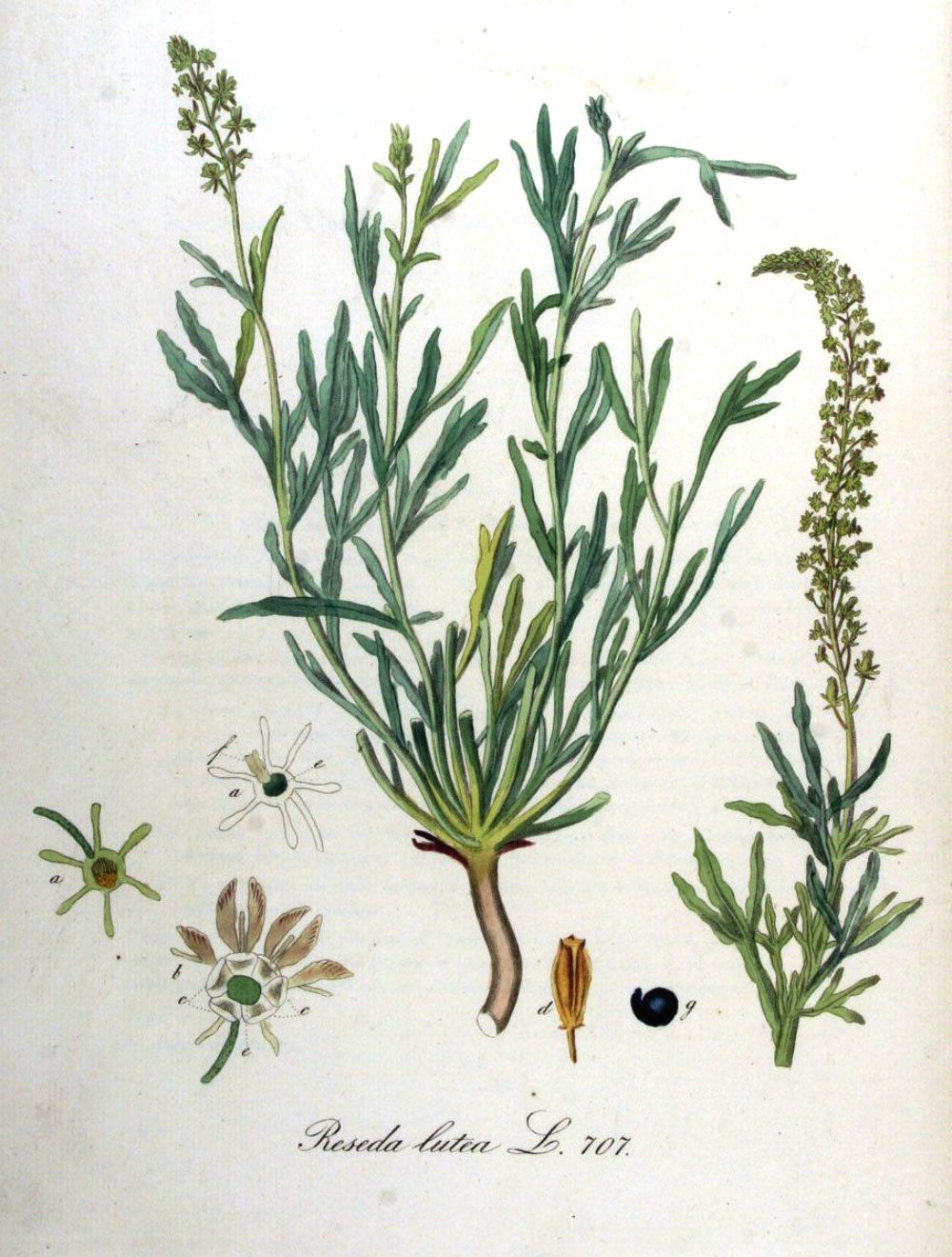 Description –
Dyer’s rocket is an annual or perennial herbaceous species, with a smooth stem, reaching heights between 20 and 90 cm.
It is a polymorphous plant, with erect, angular stems, mostly branchy.
The leaves are pinnate, petiolate and deeply indented in 3-7 oblong segments. The flowers are small, carried on short peduncles, gathered in erect racemes, they have a calyx with 6 sepals, yellow-greenish corollas formed by 6 3-fidi petals: the 2 lateral segments wider than the central one.
‘Ancient is between May and September.
The fruits are 4-5 mm capsules, subspherical, erect, carried by a short peduncle, with deep longitudinal furrows in the placental, tridentate, glabrous or papillose area. The seeds have dimensions of 0.7-1 mm, ovoid, brown-dark, smooth, bright, slightly cross-linked and without caruncola.

Cultivation –
Reseda luteola is a plant that can be grown for silk dyeing or to make cosmetic products.
It is a species that adapts very well to the Mediterranean climate and has no particular nutritional requirements.
It is advisable to sow it with a crescent moon when the night temperature is at least 12 degrees.
The land where to cultivate it must be mixed sand, like the one used to sow the lawn. Once sown, it should be covered with very little earth and kept moist until germination has taken place; after which the irrigation can be gradually reduced by intervening whenever the surface of the soil dries up.
For the transplant you can intervene at the appearance of the 4th leaf, when the seedling is at least 5/10 cm high it is transplanted.
It should also be remembered that the dispersion of the seeds is aided by birds and ants.
This plant also grows in pots, although, obviously, it is in full field that gives the best.

Uses and Traditions –
The Reseda luteola is a plant known since ancient times for its dyeing properties, but it aroused the greatest interest in the XIII century: from it it was obtained a bright yellow color, but depending on the stains different shades of green were also obtained. The active ingredient is luteolin, a flavonoid present throughout the plant, from flowering to fruit ripening; processing took place on both fresh and dried plants, and the pigment was considered among the most solid and brilliant. In the Middle Ages the demand was so high on the part of the textile and wool factories of France, England and Germany, to develop a flourishing trade and intensive cultivation, which lasted until quite recently.
But let’s go to the origins of using this plant.
It is one of the oldest dyeing plants cultivated on the European continent.
The Reseda had a relationship with civilization since the Neolithic, but the most substantial testimonies are reported in the Hebrew Bible and by the Romans (Pliny, in particular, named it and described it for its properties). It was said that the Reseda was the color with which the Roman Vestal Virgins dyed their clothes and those of the young brides in the flourishing Rome of the Emperors, but it was also used by the “Barbarians” themselves, on the borders of the Empire. In particular from the Gauls, in the French areas, together with the other two fundamental plants of the European tincture: the Robbia and the Guado.
This plant spread so rapidly to all European cultures, starting from the Celts up to Southern Italy and Central Asia. In England it was considered the best indigenous plant for the tint of yellow and was widely used in the colors of the simple clothes of the people for whole centuries. His economic and “popular” attitude did not disdain its use even in France, where it was used for dyeing precious fabrics, destined to become the magnificent dresses of Versailles in the heyday. It was also used by the creative dyers of the Venetian Doges, for the sacred clothes of the Church.
The news on its cultivation is lost in the mists of time; it was even cultivated by the Vikings, and allowed many Italian and European merchants of fabrics and pigments to enrich themselves exaggeratedly. In Scotland it was used for dyeing the famous Tweed fabric. He found space in English monasteries, which made extensive use of pigment in the form of ink, for miniatures, as well as Robbia and other pigments used for textiles.
It was certainly widely cultivated and cared for with all the honors: its cultivation in fact extended until relatively recent times, and it turned out, unlike most dyeing plants, a valid competitor of the new chemical dyes, which they almost entirely replaced almost all the natural pigments used until the last century.
In fact, the success of the plant, unlike other dyeing plants, lasted until very recent times because the coloring properties, in terms of brilliance and resistance, proved to be very competitive with modern synthetic dyes.
With this plant you can get different shades of color.
The Yellow of the Reseda – Yellow is classically a color that represents the Divine, “absolute communion with the Divine itself and the Divine that manifests itself, at least as regards the History of Art and traditional painting. Just think of the iconography of Jesus over the centuries, wrapped in yellow light (probably painted with Reseda’s pigment). Not to mention that often the Yellow is transformed into Gold, a symbol of absolute perfection, with the addition of powder to work the most precious metal. This is why in other times Reseda’s Yellow was indeed an important element in the trade of pigments and fabrics. But the Reseda lent itself in the times also to different mixtures: with the Robbia (Rubia Tinctorum) to dye of bright orange, with ‘Anthemis (the Camomilla of the Tintori) for the sweet and golden yellow of the festive clothes. With ‘Indigo Indian instead produces a very bright yellow-green, similar to lime.
The Green of Sherwood – A particular Green, warm, harmonious and vibrant as the Sherwood forest, was obtained by mixing the Reseda lutea, from the yellow pigment, to the blue Guado (Isatis Tinctoria), both wild herbs widespread in the British territory. According to legend, in the British Island, lived a hero known by the name of Robin Hood, famous paladin of the English people, who said he was “stealing from the rich to help the weak”; he wore dyed clothes of a full and lively Green, the color of the woods of the Northern Isles, which allowed him and his rebels to camouflage themselves and act in the dark woods without being discovered. That Green became, for the people they protected, the symbol of justice, peace and salvation, and took the name Saxon Green, Saxon Green.
But the Reseda Lutea was also known as a Natural Antitumor Remedy already in antiquity. Cited by Pliny the Elder in one of his treatises, other doctors later reported in their texts this medical herb among the possible allies against tumors. These include François Geoffroy and Samuel Frederick Gray. Nevertheless, before 2014 nobody had spent his time in verifying this information according to modern criteria, not even in in vitro tests. In 2014 a study interrupted for a moment the blanket of fog falling on this Natural Remedy, demonstrating its effectiveness against tumor cells of Melanoma and fibroblasts, revealing its potentialities closely linked to the high content of Benzyl Isothiocyanate (BITC) and Benzyl Glocosinolate, components that in recent times many are scrambling to isolate, understand, and try to encapsulate in drugs, since antitumor activity is more than confirmed.
The herb is also a good mellifera and was once used as a vulnerary and diuretic plant.

Preparation Mode –
Entering into the merit of Luteolin, this pigment is extracted from the whole plant (roots excluded): therefore from the flowers more, but also from leaves, branches and seeds, especially in the period of late flowering (summer). It is used both dried and fresh, to color wool, cotton, silk and linen.
The bright yellow of Luteolina, which appears fixed on the dyed wool, is very bright, but the pigment is also an excellent base for the mixtures of colors, combined with other Herbs Dyeing and different stains. In fact, before dyeing, it is usually used to put ‘rock alum (especially for wool), to fix the color on the fibers of the fabrics and to give the lemon yellow. Alternatively, iron is fine too, but the resulting nuance is olive. Then the yarn is immersed in the warm color bath (which comes from at least thirty minutes of infusion), which must be prepared with a quantity of plant equal to the weight of the fabric.
An ink can also be prepared with this plant.
Macerating the Reseda luteola in alcohol, you get an excellent ink for writing and drawing, also used in antiquity by the amanuensis friars. Reseda’s pigment, plunged into plaster, gives a golden yellow ink, which was once used in place of the real gold dust, to give magnificence to the sacred paintings.
As for its healing and pharmaceutical properties, the information on the usability of this herb concerns the recipe in traditional remedies that speaks of the infusion of 60 grams of flowered buds for 20 minutes, drinking up to 3 cups a day for its vulnerable properties and diuretic.