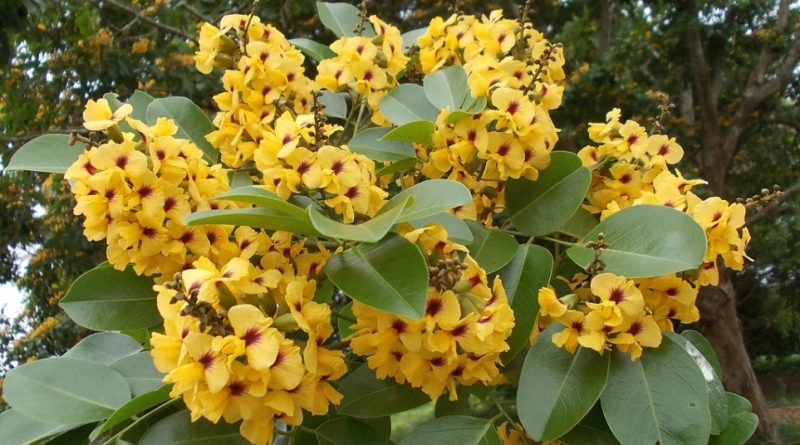 Systematics –
From the systematic point of view it belongs to the Eukaryota Domain, United Plantae, Magnoliophyta Division, Magnoliopsida Class, Subclass Rosidae, Fabales Order, Fabaceae Family Subfamily Faboideae, Tribù Dalbergieae and then to the Genus Pterocarpus and to the Species P. santalinus.
The term Lingoum santalinum (L.f.) Kuntze is synonymous.

Etymology –
The term Pterocarpus comes from the Greek πτερóν pterόn ala and from carpos fruit: that is with winged fruits.
The specific epithet santalinus as it is similar to Santalum rubrum.

Geographical Distribution and Habitat –
Red Sandalwood is a tree widely distributed in tropical regions of the world, particularly in India, Sri Lanka, Taiwan and China.
The area of ​​origin is limited to a very restricted area of ​​India of 15,540 km2 in the south-east. Currently this plant is found exclusively in a well-defined forest section of Andhra Pradesh in southern India but is also found in the Chinese provinces of Yunnan, Guangdong and Guangxi and on the island of Hainan, where it is called zitan. 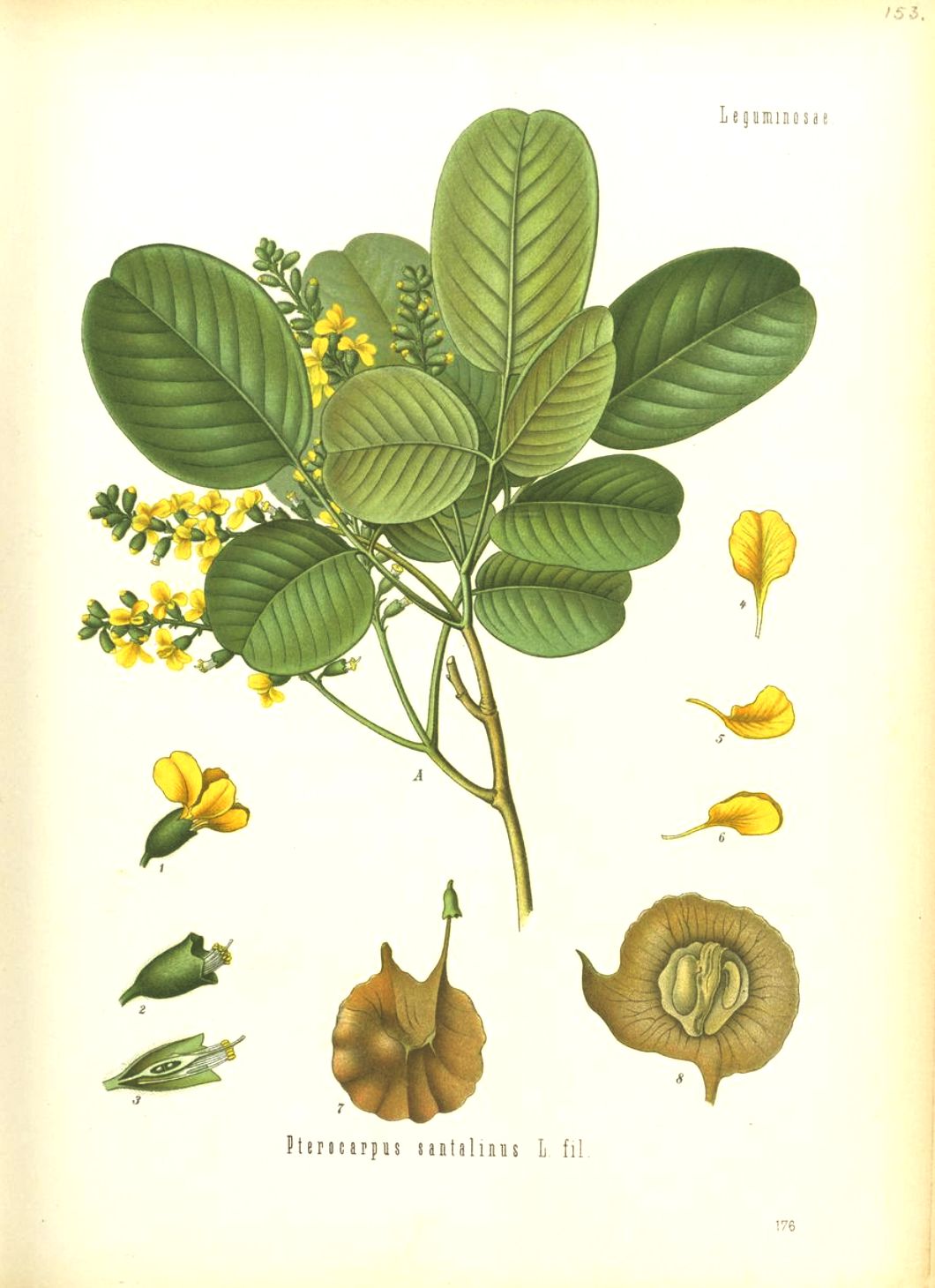 Description –
Pterocarpus santalinus is a small tree that can grow up to 8 meters.
The trunk has a diameter of 50 – 150 cm and the leaves are deciduous of small and medium dimensions (3-9 cm), alternating, trifoliate with three leaflets.
The flowers are produced in short racemes and are papilionaceous, bisexual, large and yellow. ). The flowers open at night and the primary pollinators are Apis dorsata, A. cerana indica and A. florea.
The fruit is a 6-9 cm long pod containing one or two seeds.

Cultivation –
For the cultivation of Pterocarpus santalinus take into account that it is a plant that grows rapidly as a young, reaching 5 meters in height in three years, even on degraded land.
It is a species not very resistant to frost, not bearing temperatures below -1 ° C.
In seed propagation it must be considered that it has low germination rates due to their consistency, low vitality and temperature sensitivity.
you can proceed with the alternating wetting and drying technique every 48 hours which improves germination, reaching 73%, or you can resort to the treatment with gibberellic acid which involves a slightly lower germination of the seeds.
You can also proceed with propagation by cuttings, but even here the difficulties of rooting are not few.

Uses and Traditions –
Red Sandalwood, like African or Nepalese sandalwood and Indian sandalwood is appreciated for its hard, dark purple, bitter wood.
For this reason the export of Pterocarpus santalinus from India to Europe began in the seventeenth century, mainly as a use for dyeing fabrics.
In Japan, the wood of this plant is used to make sculptures and musical instruments, shamisen and koto, as well as seals or hankos. In Buddhism this plant is considered a symbol of sanctity and is therefore used for carved statues, as a component of incense and for cremation.
In China, Pterocarpus santalinus wood has a long history of use in furnishing and other precious wood products. In this region the wood has historically been appreciated, particularly during the periods of the Qing dynasty, and is indicated in Chinese as zitan (紫檀) and written tzu-t’an by previous western authors such as Gustav Ecke, who introduced Chinese classical furniture in wood in western areas.
A chair made of red sandalwood is now visible in the Forbidden City of Beijing, inside the Hall of Supreme Harmony, and once used by emperors of the Qing dynasty.
This tree is however appreciated for the rich red color of its wood. Wood is not aromatic. The tree should not be confused with Santalum aromatic sandalwood trees that grow natively in southern India.
The timber, derived from many of the species mentioned above, often takes the name of padouk: it is known for its resistance, stability and the pattern of the veins: the most valuable species have a red or reddish color (although with time it becomes brown ) that make them highly sought after in cabinetry.
In India sandalwood is one of the main and profitable markets for smugglers, since a high price is paid in China. As the export of sandalwood is illegal in India, the undeclared market is growing and every year there are numerous arrests of those who try to smuggle this wood into China.
Various substances and products are also extracted and extracted from this plant. A dye prepared from the heartwood is used as a dye in optical microscopy, as a dye in pharmaceutical preparations, in the food, leather and textile industries and as a textile dye.
The medicinal properties of Pterocarpus santalinus are due to bioactive compounds present in the heartwood of the plant, which have been shown to have a wide range of biological activities, giving a remarkable phytotherapeutic potential to this plant for the treatment of various diseases.
In vitro and in vivo studies showed that heartwood and cortex showed antidiabetic, antimicrobial, anti-inflammatory and hepatoprotective activities. In Ayurveda medicine the heartwood of the plant is used as an external application for the treatment of inflammation, diabetes, headaches, skin and jaundice diseases and in wound healing.
Also due to its exploitation, due to the use of wood, the Pterocarpus santalinus has been listed as an endangered species by the IUCN; however, it was subsequently reclassified as Almost threatened in 2018, since the extent of this loss is not exactly known. It is also listed in Appendix II of CITES, which means that a certificate is needed to export it, which should only be granted if trade is not harmful to the survival of the species.

Preparation Mode –
From the red sandalwood, as well as for the use of wood, it is possible to obtain many active ingredients which must however be used under direct prescription and medical indication.
From this plant is also obtained a dyeing powder used in combination with red Henne or other mixtures of natural coloring herbs to accentuate the cold tones of henna, giving a cold / purplish red, dulling the coppery red, warm.
It is used exclusively together with other herbs because it does not dye the hair on its own.
To use, mix the desired quantity with red henna, following the instructions for its preparation.
The use of dyeing principles for dyeing fabrics in pink is also interesting.