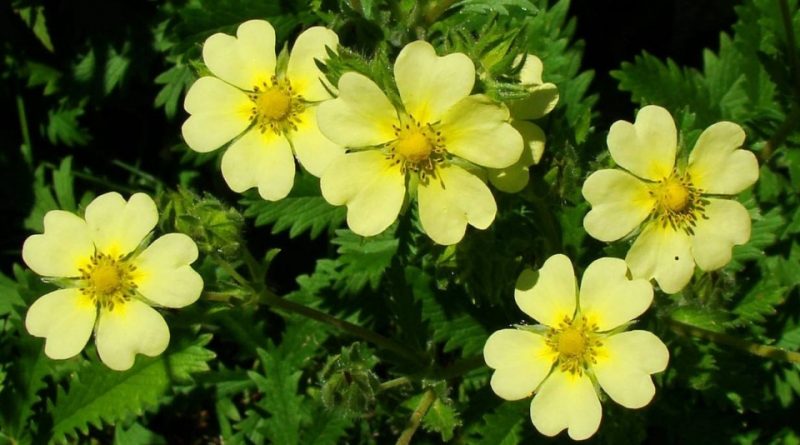 The Tormentil (Potentilla erecta (L.) Raeuschel, 1797) is a herbaceous species belonging to the Rosaceae family.

Etymology –
The term Potentilla is the diminutive of potent pótens: reference to the medicinal properties of some species of this genus.
The specific epithet erecta is due to its erect habit.

Geographical Distribution and Habitat –
The Potentilla erecta is a plant of Eurasian and Eurosiberian origin. In Europe it is common and widespread everywhere, reaching as far north as England and Scandinavia. It is also found in Asia and northern Africa.
In Italy it is widespread throughout the territory including the entire Alpine arc.
Its habitat is that of wooded places and damp pastures (subalpine lowland grasslands), but also of moors, peat bogs and oaks, hornbeams, betulets and chestnut trees. It grows above all on siliceous soils but also calcareous with indifferent pH and soils with low nutritional value and average humidity.
Its altimetric diffusion varies from the plane up to 2400 m s.l.m .. 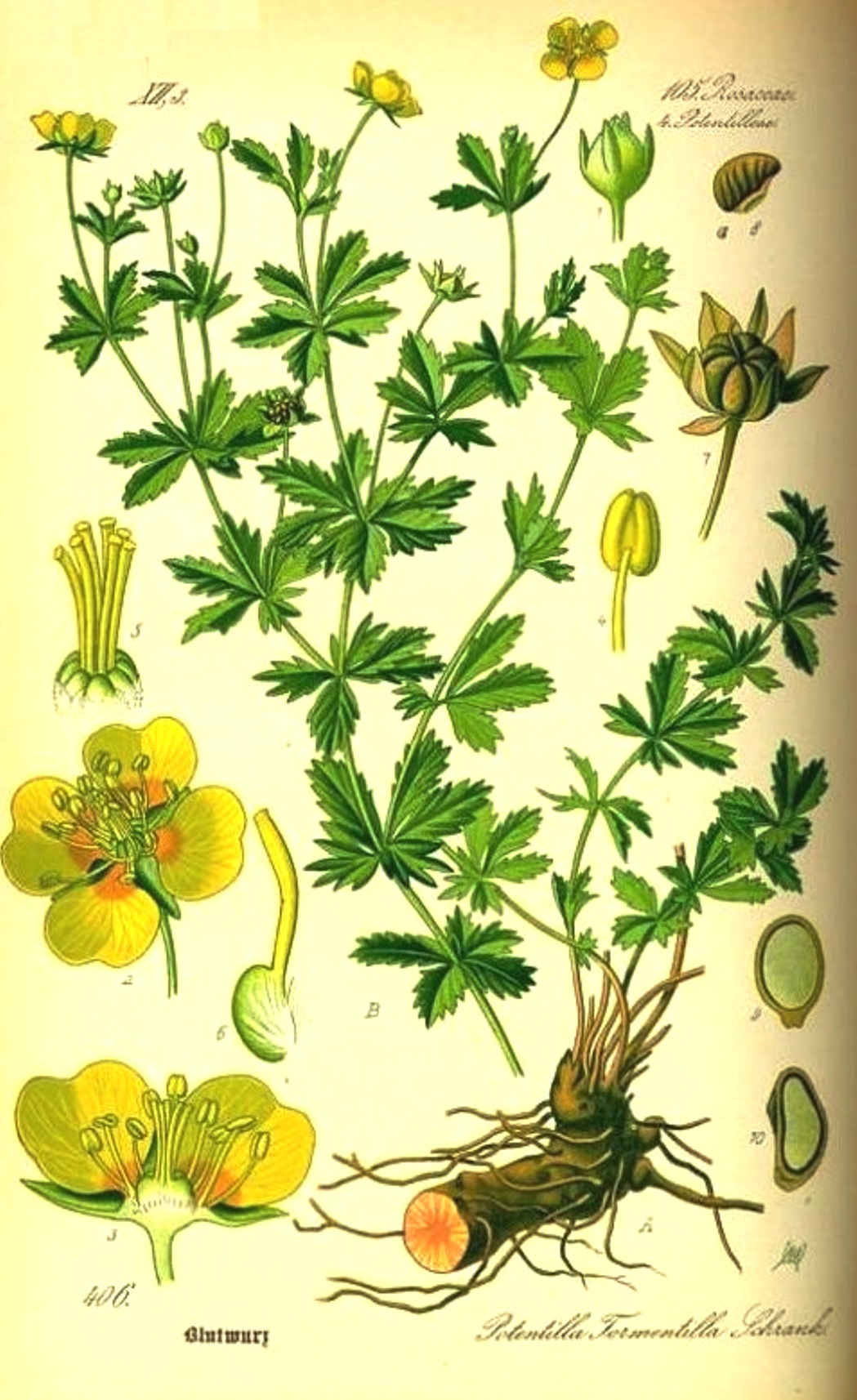 Description –
The Tormentil is a perennial herbaceous plant with wintering buds at ground level and protected from litter or snow.
It has an upright flowering axis and is generally not very leafy, with a height that can be between 10 and 30 cm.
The underground part of the stem consists of a large rhizome, often tuber-shaped and brown in color.
The upright, straight stems are generated directly from the rhizome: at the beginning they are decidedly prostrate, then before flowering they tend to become erect; they are multiple, delicate and very leafy, but with little hairiness.
This plant has two types of leaves:
– the basal ones that are deeply pinnate, divided into three-five distinct palmated segments (called lobes or leaflets) and toothed along the edges, with ovate and petiolate shape.
– Those caulines that can be sessile or briefly petiolate. In general they are divided into five (or three segments) in the form of obcuneata (or lanceolata) and have stipules adorned with the petiole itself. The various segments are all inserted in the same point and are toothed along the margins up to the apex (2 -3 teeth per side). The laciniata or lanceolate-like stipules similar to the leaf lobes are sub-glabrous on the two pages, but hairy (almost tomentose – silky) on the veins and on the edges. Size of the largest lobes: width 1 cm, length 2 cm.
The flowers are gathered in inflorescences that are formed by solitary flowers on long peduncles inserted in the armpit of the upper leaves.
The flowers are hermaphroditic, actinomorphic, pentacyclic and tetrameric. The receptacle is flat and dry and fruitful, with a full flower size of 8 – 12 mm.
The anthesis is between May and August.
Pollination takes place both through butterflies (even at night), bees, flies, but it is also a self-fertile plant.
The fruit is multiple and is a reddish-brown achenet; an aggregate of wrinkled 1.5-2 mm achenes, with tubercles at the apex and on the back, slightly keeled, glabrous.

Cultivation –
For the cultivation of this plant remember that it prefers sunny places and adapts to any climate, even those with very cold temperatures and close to -15 ° C.
It grows well in any soil type as long as it is well drained. The ideal growing medium is a mixture of common garden soil and coarse sand. A slightly acid pH of the soil is required only by some varieties of potentilla while most of them grow well in calcareous soils.
Regarding the water regime, the Potentilla erecta cultivated as a dwelling is generally satisfied with rainwater; it also tolerates long periods of drought well but in the flowering period it is good to irrigate it with modest water supplies. The pot-grown plant should be watered regularly but only when the soil is completely dry.
For the fertilization it is necessary to intervene in February-March, when the vegetative cycle is resumed with organic fertilizer at the base of the plant, or of the slow-release granular fertilizer.
The reproduction of the Potentilla occurs by seed, by division of the tufts and by cutting.
The sowing must be carried out directly in the ground and is carried out in autumn or spring by layering the seeds on a specific and fertile soil. The seedbed must be placed in a place with a constant temperature of about 18 ° C until the tender shoots appear.
If it is multiplied by division of the tufts, this should be practiced in spring by transplanting the divided portions with disinfected and very sharp tools, at the same time to avoid traumatizing the roots.
In the multiplication by cuttings it is necessary to operate in the summer, when the cuttings of semi-woody stems are prepared which must be taken with well sharpened and disinfected shears to avoid the spread of fungal diseases; they must then be grounded in a mixture of sand and peat in equal parts and then transplanted into the ground.
The propagation by cuttings and division of the heads ensures, of course, plants genetically identical to the mother as there is no mixture of hereditary characters.
Potentilla erecta plants grown in pots should be repotted every year in spring, before the vegetative resumption of the plant. it is necessary to use a vase larger than the previous one and new and fresh soil rich in organic substance. When carrying out repotting, be careful not to traumatize the most delicate roots.
Finally the pruning: this plant does not require pruning but the withered leaves are manually removed and the dry floral stems are cut to facilitate the release of the new ones.
Although this plant is not a gardening species, however it is sometimes also grown (as well as naturally collected from the spontaneous flora) by herbalists for its particular therapeutic properties.

Uses and Traditions –
The Tormentil that assumes different morphologies also as a function of the altitude which is quite wide. It can therefore appear in different aspects: the stem can be erect – patent or prostrate, the hairiness can be scarce or slow, the stature, the length of the petioles, the peduncles, the stipules and the petals can also be variable. Another inconstant character is the shape of the stipules and leaf lobes. In some cases there was also a variability in the number of petals (from 3 to 6). All these characters, however, do not last long and the plants that possess them tend to generate later individuals in the norm.
Furthermore this species hybridizes with Potentilla reptans (both are very common species in Italy and are found everywhere) and it is probable that the Potentilla anglica species which has intermediate characteristics between the two species mentioned above is a hybrid genetic species.
As for its recognition, the Potentilla erecta can be easily confused with the Potentilla anglica Laicharding (English Cinquefoglia) which is different for a few characters: sometimes the petals are 5; carpels are more numerous (they can reach up to 50); the leaves are predominantly 5-segment. However, in our neighborhood it is only in Corsica.
The most common is the Potentilla reptans L. (Common Cinquefoglia): it is however distinguished by the number of the petals which is always 5; for the leaves that are generally more oval and the teeth on the edges are less marked; but above all for its bearing which is creeping and rooting at the nodes (it is a stoloniferous plant).
The Potentilla erecta is characterized because it contains various tannin substances (20%): we find catechic tannins, catechins, ellagic acids (vegetable tannins) and there are also flavonoids and triterpenes.
According to popular medicine this plant has good astringent properties (limits the secretion of liquids).
Other properties indicated for this plant are: odontalgica (reduces pain in the teeth – probably the common name “tormentilla” derives from this property capable of attenuating the “torment” of the evil of the teeth), decongestant (decreases the blood supply in a date part of the body), antibiotics (blocks the generation of microbes and bacteria – useful for oral hygiene), antidiarrhea (calms diarrhea through both astringent and sedative bowel actions), hypoglycemic (decreases blood glucose), haemostatic (blocks the release of blood in the event of bleeding). It also appears to interfere with the absorption of iron and other minerals by our body. According to some texts the treatment against diarrhea and sore throat have not been proven.
The used parts of this plant are the rhizome and the flowers.
Red dyes can be extracted from the leaves and especially from the roots.

Preparation Mode –
In addition to therapeutic purposes, Potentilla erecta can be used in the kitchen where the roots (cooked) are used, while infusions can be prepared with the leaves.
Furthermore the industry obtains from this some products for cosmetics (soaps, deodorants and various creams), for dyeing (dyes from the leaves, but above all from the roots we get a beautiful red color that is used as ink – once it was used for to dye leather red), but also for plant chemistry (tannin).