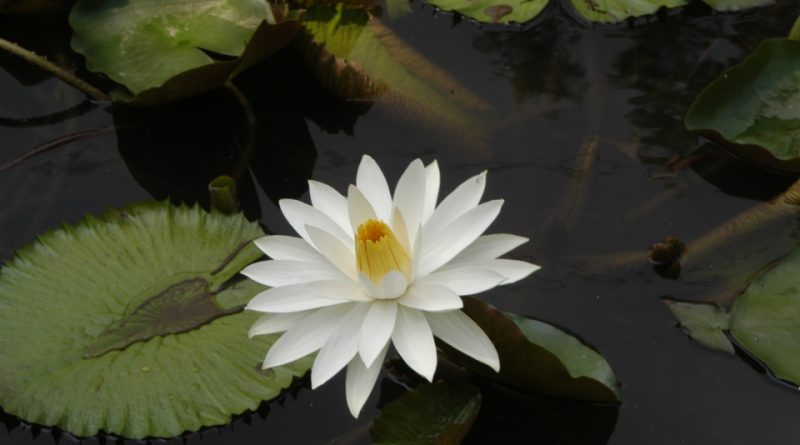 Systematics –
From the systematic point of view it belongs to the Eukaryota Domain, United Plantae, Spermatophyta Superdivision, Magnoliophyta Division, Magnoliopsida Class, Subclass Magnoliidae, Order Nymphaeales, Family Nymphaeaceae and then to the Genus Nymphaea and to the Species N. lotus.

Etymology –
The term Nymphaea comes from the Greek Νυμφἅς Nymphas Ninfa, a minor deity of Greek mythology guardian and animator of particular natural environments, depicted as a beautiful young girl.
The specific epithet lotus comes from the Greek λωτός lotós, mythical plant, of which Homer tells in the Odyssey, which had the property of making people lose their memory.

Geographical Distribution and Habitat –
The white Egyptian lotus is a plant that grows in various parts of eastern Africa and south-east Asia and that in some of its varieties is a tertiary relict species found in the thermal waters of Europe, for example the Peţa river in Romania or the Hévíz lake in Hungary. 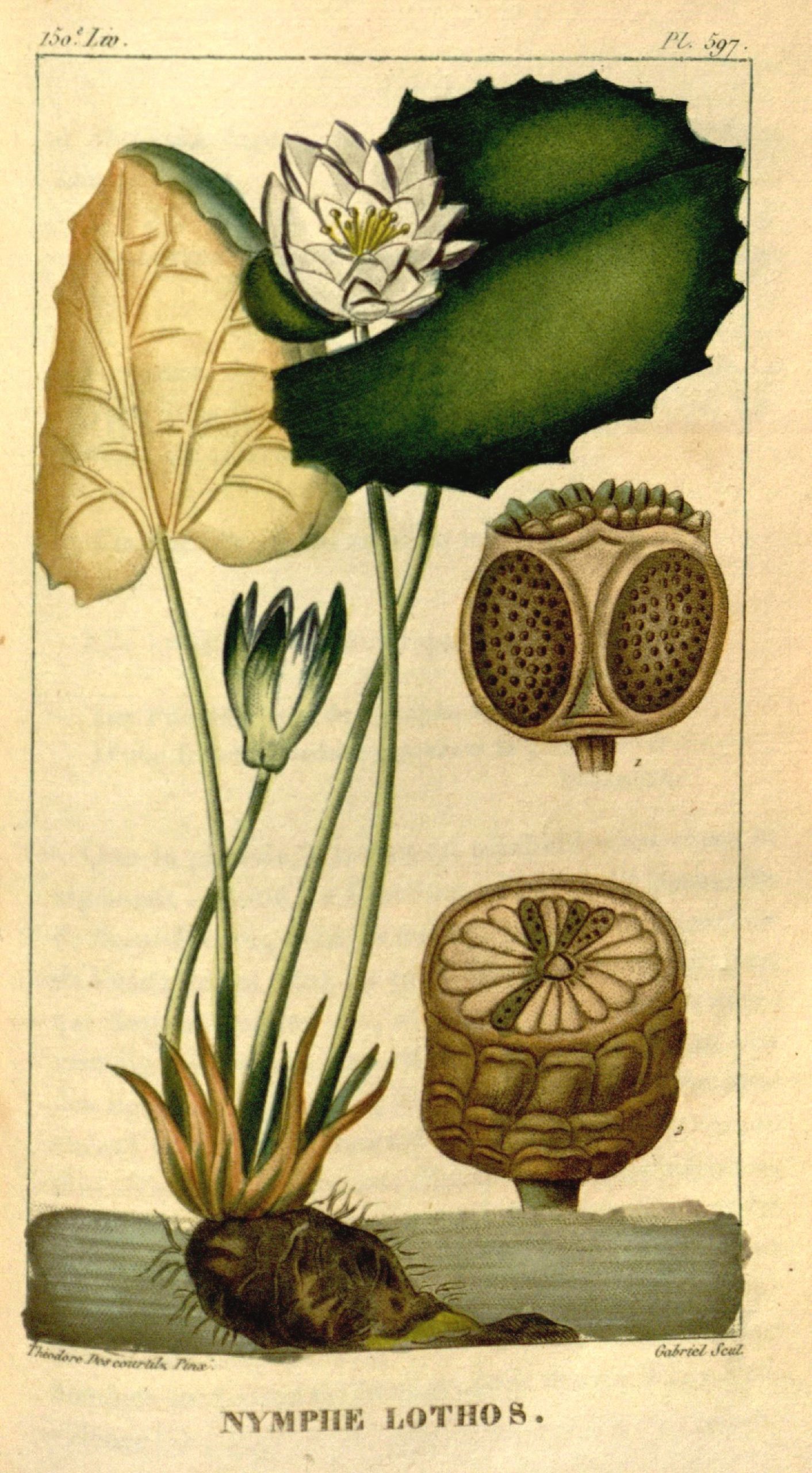 Description –
Nymphaea lotus is a perennial, floating, herbaceous species with tuberous rhizome, which grows up to 45 cm in height, characterized by large circular leaves with serrated margins floating on the water.
The flowers rise above the water and are white and sometimes dyed pink.
The fruit is a rather voluminous berry which, once fallen into the water, ends up at the bottom where it completes the maturation cycle, at the end of which the numerous seeds contained in it are released.

Cultivation –
The white Egyptian lotus must be grown in areas with shallow waters and if you want to keep the plant low and compact, avoiding the proliferation of superficial leaves, it is necessary from time to time to eliminate the larger leaves (the older ones) by pruning them at the base of the petiole, and to cut immediately the stems of the leaves clearly destined to the surface whenever they occur.
In low light conditions the plant remains less compact and the production of leaves destined for the surface is much earlier and more frequent, as the lack of light on the bottom pushes the plant more towards the search for surface light. In practice, in nature, due to the darkening of the seabed caused by the proliferation of superficial leaves, the plant ceases the formation of foliage destined to remain submerged and produces only foliage of the type intended for the surface, the plant practically becomes like a float, but held at the bottom by the rhizome.
For its growth it is necessary to pay attention to the chemical-physical values ​​of the aquarium which must have a pH between 5.5 and 7.2, a temperature between 22 and 30 ° C and a light exposure between medium and very strong.
Furthermore, water must not be too rough, in fact if it is stagnant it is better.
As far as fertilization is concerned, it is a medium-sized plant, a complete and balanced fertilization certainly helps in obtaining a good quality of the submerged foliage, both in terms of consistency and coloring, but everything must obviously be related to the amount of light offered and to the administration of CO2.
As far as reproduction is concerned, the Nymphaea lotus, in nature, reproduces by flowering and subsequent fruiting.
In optimal conditions it is a very infesting plant able to reproduce and multiply with surprising rapidity. Flowering and fruiting can also be observed in the pond during the summer and, albeit less easily, in the aquarium, especially in the case of open, large and well-lit tanks.
To favor its propagation it is also possible to opt for the division of the rhizome, cutting it between two buds, although this practice is very traumatic for the plant.
The rhizomatous stem should not be sunk too much, just the minimum necessary to avoid the initial floatation of the plant. The ideal would be to simply place it at the bottom without burying it.

Uses and Traditions –
In ancient times, this plant, especially in Egypt, was considered a symbol of creation. In ancient Greece, it was a symbol of innocence and modesty.
Also for this reason the ancient Egyptians cultivated the white lotus in ponds and marshes.
This flower often appears in ancient Egyptian decorations. They believed that the lotus flower gave them strength and power; flower remnants were found in the burial tomb of Ramesses II. The Egyptian tomb paintings of 1500 BC about provide some of the first physical evidence of ornamental horticulture and landscape design; they represent lotus lakes surrounded by symmetrical rows of acacias and palms. In Egyptian mythology Horus was occasionally shown in art as a naked boy with a finger in his mouth sitting on a lotus with his mother. The lotus was one of the first two motifs of Egyptian capitals. Women often wore amulets during childbirth, which depicted Heqet as a frog, sitting in a lotus.
In addition, even the ancient Egyptians extracted the fragrance from this flower. They also used the white lotus in funeral wreaths, temple offerings and female ornamentation.
The number 1,000 in ancient Egyptian numbers is represented by the symbol of the white lotus.
The Egyptian lotus is the national flower of Egypt and is also an element of the Coptic flag.
The Nymphaea lotus is found, in nature, in the ponds and prefers clear, warm, calm and slightly acid waters. It can be found in association with other species of aquatic plants such as Utricularia stellaris.
For this reason it is often used as a freshwater aquarium plant. In the ornamental garden pools and in the greenhouse culture it is cultivated for its flowers, which normally do not appear in the conditions that one has in amateur aquariums.
To have variegations similar to tigers, the plant must be cultivated under intense lighting.
In some parts of Africa the rhizomes and tubers are eaten by starch which contain boiled, roasted or ground to obtain a flour after drying. Young fruits are sometimes consumed as a salad. The seeds turn into a meal.
The tubers or seeds are used as food in times of famine in India.
Although the plant contains a quinolizidine alkaloid, a nuparin and related chemical substances, both described, according to some sources as poisonous, intoxicating or without effects, seems to have been consumed since antiquity. The effects of the alkaloids would be those of a psychedelic aphrodisiac, although these effects are more similar to those found in Nymphaea caerulea, the Egyptian blue water lily.
Chloroform, ethyl acetate and n-butanol leaf extracts show the presence of phenolic compounds (flavonoids, coumarins and tannins), sterols and alkaloids.
Other compounds include myricitrin, myricetin 3- (6 ” – p-cumarilglucoside), myricetin-3′-O- (6 “-p-cumaryl) glucoside and two macrocyclic epimeric derivatives, nympholide A and B, [6] myricetin- 3-O-ramnoside and penta-O-galloyl-beta-D-glucose.

Preparation Mode –
The Egyptian white lotus, as well as an ornamental plant, is used in some areas of Africa for food purposes; in these areas they are used, after cooking, or dried to obtain alimentary flours.
Even the young fruits are consumed as a salad, as well as the seeds prepared in various ways.
Moreover from the roots a black dye can be extracted used from remote times as in various uses.