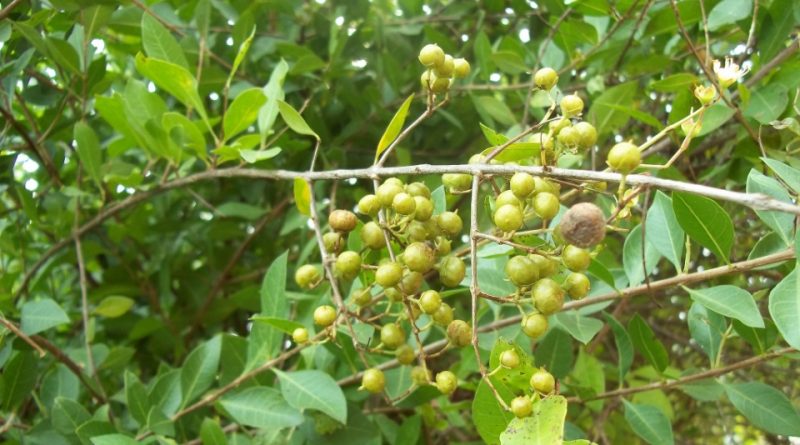 Etymology –
The term Lawsonia was dedicated by Linnaeus to his friend and editor Isaac Lawson.
The specific epithet inermis, is due as originally this plant had been classified with three different names (inermis, spinosa, alba) attributed respectively to the juvenile, to the adult form and to a variety with white flowers; when the botanists recognized that it was a single species, they kept the name of the juvenile stage even if growing the plant becomes thorny.

Geographical Distribution and Habitat –
Lawsonia inermis is a plant native to the subtropical regions of the Mediterranean basin. Today it is widespread and cultivated in all Arab countries, in North Africa from Morocco, Egypt, Tunisia, Asia Minor, Iran, to western India; but cultivation has spread to China and Florida. 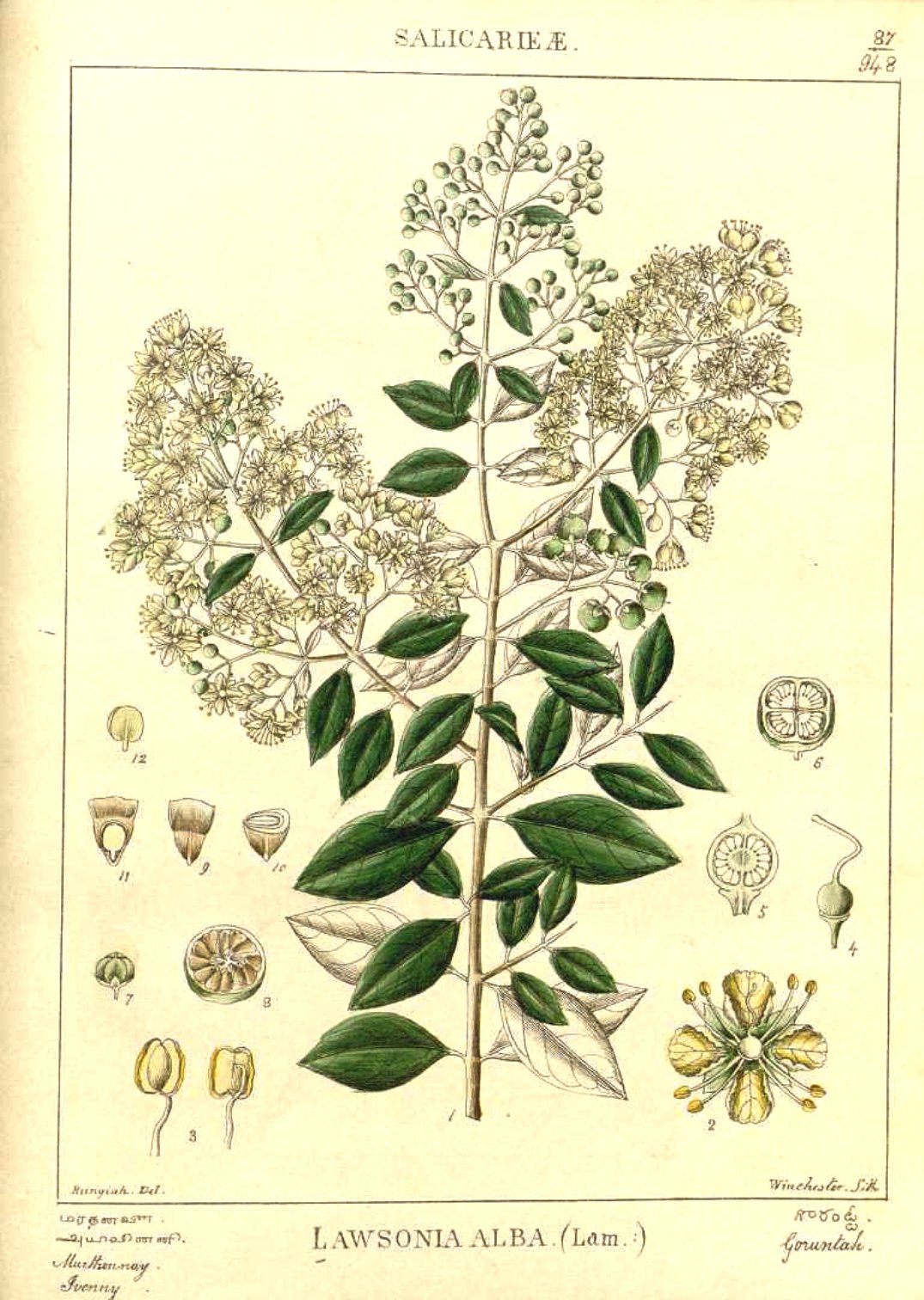 Description –
Lawsonia inermis is a suffruticosa shrub species, spiny that can reach, in optimal conditions, even 6 – 7 meters high, becoming very long-lived.
It has opposite, lanceolate or obovate leaves.
The flowers are small, whose color varies from white to pink.
Flowering is from May to July, and the fruits are capsules.

Cultivation –
The Lawsonia intermis, even if of tropical and sub-tropical origin, thanks to its easy adaptability can be cultivated almost everywhere in the areas with a mild climate and with due care, even in a closed environment.
In areas where the temperature almost never drops below 15 ° C, the sowing period takes place in March.
The quantity of seed is around 7 – 10 kg of seed per hectare. The sowing, to be carried out, in mid-February can also be placed in a bowl with water, which will have to be changed frequently, until the first shoots have sprung up. When this time comes, the sprouted seeds will be placed in jars with the sandy earth, which will then be placed on the final earth, prepared for future henna plants. At this point the seeds will be covered with fertilized earth and watered very frequently. Later, the small plants will prefer an environment with little water, to be added only when the earth is almost dry, ie simulating the climatic conditions of the desert areas.
After 3 or 4 months the plants begin to reach about 30-40 cm in height. This is the time to prepare the soil, previously fertilized with organic substance, in which to transplant them, so that they can be arranged in rows at a distance of 30-45 cm. Once implanted the irrigation must be sporadic and on request. Frequent irrigation risks creating fungi and favors parasitic attacks on the plant. The small seedlings will continue to grow and, if well rooted, will produce flowers and leaves for about sixty years and more.
After three years the Lawsonia intermis leaves are ready for the first harvest. The flowering and the balsamic period of the plant are included in the months of April-May and October-November, thus allowing two moments of harvest during the year. The leaves are harvested by cutting the branches and pruning the mature leaves at the base of the plant, then collected in a place of shade, fresh and dry to proceed with drying.

Uses and Traditions –
The Lawsonia intermis plant has been known since ancient times, especially in its area of ​​origin, the Middle East (Mesopotamia and ancient Egypt), but the Italian terms henna and alcanna as well as the French linguistic loan henna are more recent, in fact they derive all from the Arabic to the hanna, of Persian origin, a name that entered the Italian language in the 16th century.
Its use is very ancient, even in the tombs of the Egyptian pharaohs dusts were found obtained from its leaves and mummies with henna colored nails.
Henna, also known as Alcanna vera or Alcanna d’Oriente, has been used for centuries in the countries of origin as a hair colorant, which takes on more or less intense coppery reflections depending on the base color. For the skin it is used for temporary tattoos; Henna powder was used as a religious and traditional practice to dye beard and hair, for tattoos that decorate hands, feet and other parts of the body; in many countries this custom is still very much alive. It is also used to dye vegetable fibers, wood, and animal skins (leather).
In North Africa and India it is used for temporary tattoos on hands and feet in weddings and other religious rituals such as mehndi or hair dyeing. The knowledge of coloring and antiseptic properties dates back to ancient times; traces of it can be found in Egyptian mummies.
From the dried and ground leaves and branches a yellow-greenish powder is obtained, used as a dye on fabrics and animal skin. The coloring molecule is called lawsone (a naphthoquinone), an orange-red substance that is present in the leaves of the plant.
The lawsone content of henna leaves varies from region to region, and the highest level has been estimated at around 1%.
The lawsone binds to keratin, the hair, nail and skin protein, coloring these structures, through the formation of electrostatic bonds. The molecule of the lawsone also reacts with the sulfur groups and with the amino groups present in keratin.
The brown red shade varies according to the composition in branches (red) and leaves (brown). The collected leaves are dried, pulverized and sieved to create the famous reflective coloring powder. Often henna is mixed with indigo to provide a greater range of dark colors, and with the Cassia obovata.
Furthermore, in the textile industry, henna has been successfully used in the coloring of many fibers; its use in combination with various inorganic salts has allowed to obtain a wide range of colors, in addition to the original red one. If then the yarn is soaked, before and after coloring in an acid solution, the dye becomes permanent, resistant to washing and to sunlight.
Henna is used in Italy, as in the rest of the world, especially as a natural dye for hair, as an alternative, certainly not a substitute, to synthetic chemical dyes and recently it is also used to make temporary reddish-brown tattoos.
Henna reflected in red, brown hair, mahogany red, brown hair, dark red, medium blond, carrot red, light blond and oxygenated or white hair.
Ultimately it gives the same color to all the hair and the differences are due exclusively to the background color on which it is applied.
The alkaline environment limits the bonding capacity between fiber (wool, cotton, hair, etc.) and dyeing, while a slightly acid environment (about pH 5.5) favors a lasting color. Henna, unlike chemical dyes, does not penetrate inside the hair, but deposits and binds to the cuticle scales. It has an effect called “substantivante”, ie the diameter of the hair increases slightly, and the hair is also more voluminous and resistant to external agents.
The coloring of the hair with henna is a special case of ancient custom that has not only succeeded in reaching up to our days, but that, thanks to the absence of sensitizing power and unpleasant allergic reactions, is still in vogue in all the countries of the world.
In the market there are preparations added to chemical dyes that allow to reach intense reds impossible to obtain with Lawsonia as such. Among these dyes, the most famous is sodium Picramate (CI 76540, a hair dye), which in some cases is added to the henna powder, at minimum concentrations (around 2-3%), and which transforms the henna orange in bright red: these are the so-called super-reinforced henna.
In the countries of origin, the Hennè becomes part of traditional medicine, as a remedy for a great variety of disorders: the aqueous extract is used as a mouthwash to gargle against sore throats; since astringent and antifungal properties are attributed to it, it is also used against skin inflammations and eruptions, herpes, psoriasis, boils, burns, hematomas, dandruff, scalp seborrhea; always in the countries of origin it is also used for internal use for various disorders of the gastrointestinal tract, despite its very bitter taste, and as an abortifacient for oxitocic properties.
In modern western herbal medicine, Henna is not used as a phytotherapy, as its medicinal properties have not yet been studied and confirmed.
Ultimately the uses of Lawsonia intermis are intended for purpose:
– religious: especially used by women, henna is a symbol of good luck;
– cosmetic and aesthetic; beautifies and can also be applied to hair, feet and hands;
– therapeutic: according to laboratory analysis, henna has anti-fungal and astringent virtues, anti dermatitis and anti seborrhea.

Preparation Mode –
The henna on sale is made up of dried and powdered leaves, green to brown-yellow-brown in color, depending on the age: the most recent one is green, the older one is yellowish. Henna is often mixed with many fragments or leaves of other plants, as well as various other impurities (sand, soil), so it is necessary to standardize the quality level, if you want to obtain a color of intensity and constant reflection.
It is also used as an aqueous extract as a mouthwash to gargle against a sore throat; it is also used against inflammations and eruptions of the skin, herpes, psoriasis, boils, burns, hematomas, dandruff, seborrhea of ​​the scalp and, in the countries of origin, also for internal use for various disorders of the gastrointestinal tract, despite its very taste bitter, and as an abortifacient for oxitocic properties.