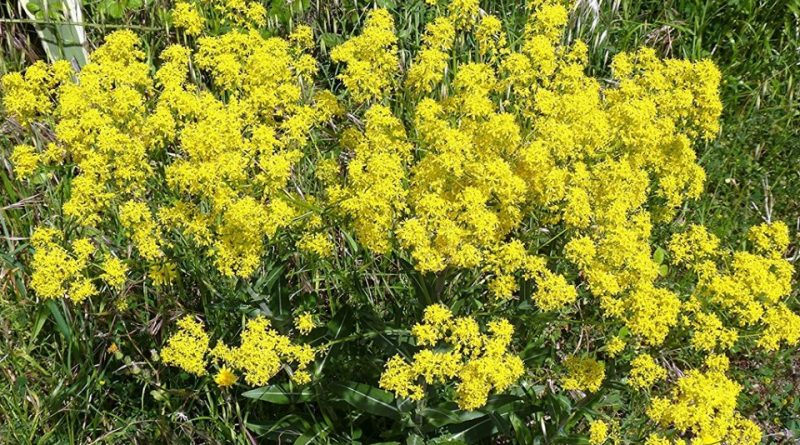 The dyer’s woad (Isatis tinctoria L.) is a biennial herbaceous species belonging to the Brassicaceae family.

Systematics –
From the systematic point of view it belongs to the Eukaryota Domain, Plantae Kingdom, Magnoliophyta Division, Magnoliopsida Class, Capparales Order, Brassicaceae Family and therefore to the Isatis Genus and I. tinctoria Species.

Etymology –
The term Isatis comes from ἰσάτις isátis, the classical Greek name of the dyer’s woad in Dioscorides and Hippocrates (from ἰσάζω isázo equalize, smooth): due to the abrasive properties of some plants of this genus.
The specific epithet tinctoria comes from tíngo dye: then used to dye fabrics.

Geographical Distribution and Habitat –
The woad is a plant of Asian origin that almost certainly was introduced in Europe starting from the Neolithic.
Other authors claim that it was imported into Italy by the Cathars who settled in the Piedmont area corresponding to the current city of Chieri.
This thesis would be corroborated by the fact that in the triangle between Toulouse, Albi and Carcassonne, the cultivation of Isatis tinctoria developed in the duchy of Lauraguais, from which the “pastel blue” was obtained, extremely sought after in painting and in the textile industry; this activity gave particular prosperity to these areas, originally poor, so much so that since then they have become defined as the “town of Cuccagna” (from cocagne, the French name given to the blue dye cake as it was marketed).
Its Italian diffusion is in the areas of the Western and Maritime Alps (Valle d’Aosta, Piedmont and Liguria), in the Veneto region, even if limited to the area of ​​the province of Treviso, in some regions of central-northern Italy such as Tuscany, Umbria and Marche and in central and southern Italy like Abruzzo and Lazio; we also find it in Sicily and Sardinia.
Its habitat is that of the uncultivated, ruins, along the roadsides and on trampled soils, usually with basic reaction, but also on silica sands, from sea level to the subalpine belt (about 2.000 m. S.l.m.). 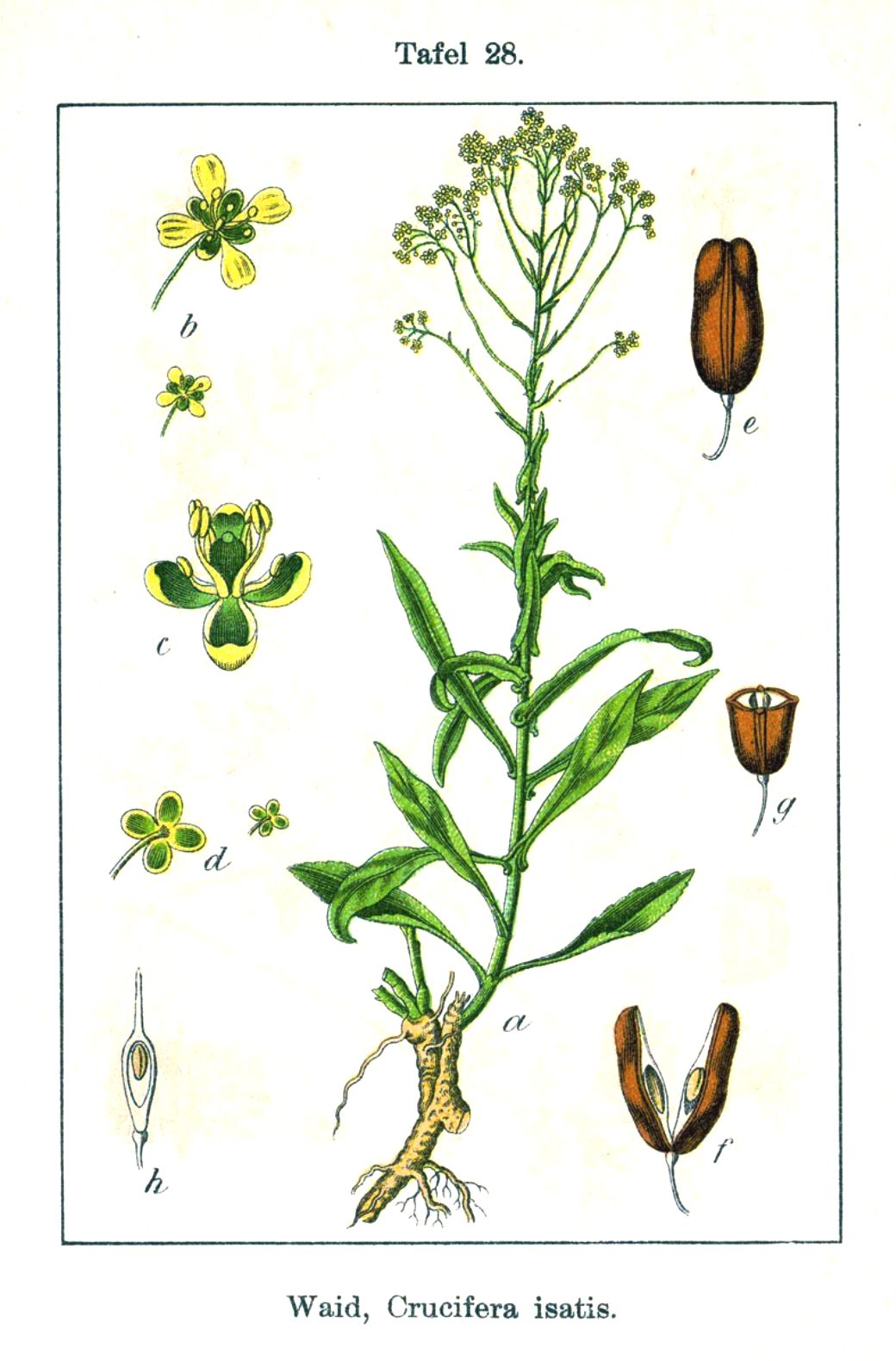 Description –
The dyer’s woad is a biennial herbaceous plant that can reach a height between 40 and 120 cm.
In its first year of life the plant remains in a vegetative phase in which it forms a rosette of leaves; in the second year there is the development of the flower stem which leads to the subsequent fructification. The entire plant is glaucous.
The leaves are lanceolate, with dimensions from 1.5 to 5.0 cm in length.
The inflorescence is made up of about twenty purple-blue stems bearing flowers (gathered in dense racemes in the form of a corymb) with elliptical sepals and yellow petals, of which only a few mature. The diameter of the head varies from 3.5 cm to 18 cm.
The anthesis is between May and July.

Cultivation –
Isatis tinctoria grows on well-drained and rich soils, loves light but can grow even in mid-shade; it is a plant of easy cultivation that is re-seeded on its own even if it does not like to exploit the same soil twice.
The leaves are harvested from the first year and 3-4 crops can follow the first. the first year forms a rosette with a fresh appearance and a large taproot; it takes 20 months to flower and from the second year with its yellow flower it can light up the whole garden.

Uses and Traditions –
The dyer’s woad is a plant that has always been known and appreciated for its dyeing properties related to the blue color.
He made the wealth of the city of Erfurt (in Thuringia), but already the ancient Egyptians, the Bretons and the Romans used it as a remedy and as a dye.
Evidence of its ancient use comes from India, the Middle East and North Africa, while in Europe it has its maximum diffusion only in the late Middle Ages. The reasons for this delay are due to the fact that color is also a cultural construction: in European Mediterranean societies, blue has covered a marginal symbolic role throughout antiquity and the Middle Ages, for the Romans it even has negative connotations as identified with the color of barbarians who used to color their bodies to frighten their enemies.
The dyer’s woad, as a dye, was in fact also used by the Britons to dye the face of the characteristic blue / blue color that made their appearance more terrible in battle; “Dyeing” something in the civilized world was tantamount to saying it was red. Only starting from the 12th century the blue undergoes a progressive enhancement, up to a total reversal of the perspective in the modern age: suddenly, the blue becomes beautiful.
The cultivation and trade of the dyer’s woad then began to assume a considerable economic importance, particularly in Thuringia and in the Occitan territories included between the cities of Toulouse, Carcassonne and Albi, so much so as to give rise to the expression pays de cocagne – land of the bonanza – to indicate a place of extraordinary abundance and prosperity: the coques or cocagnes were dyeing pasta breads ready for sale. Even in Italy, between the fourteenth and fifteenth centuries, the dyer’s woad is the basis of essential trade flows for the economic development of numerous districts. It is processed in Umbria (the name of the town Gualdo Tadino derives from this plant), in the Apennine areas of the northern Marche (Montefeltro, upper valley of the Metauro and of the Foglia, Massa Trabaria), in some Tuscan territories (Arezzo, Val Tiberina), Piedmontese and Ligurians, but also in other parts of the country. His blue pigment was used not only for the coloring of fabrics, in many artistic sectors, from the miniature of manuscripts to the decoration of terracotta, to the paintings of the great Renaissance artists: he was widely used, for example, in numerous paintings by Piero della Francesca, whose father was a wealthy merchant of San Sepolcro dyer’s woad.
Subsequently there was a decline of Isatis tinctoria around the sixteenth century when its blue was supplanted by the dye matter extracted from the Indigofera – hence the name “indigo” – a plant that showed distinctly higher yields, better color uniformity and greater ease of processing.
We must arrive at the beginning of the nineteenth century to witness a hint of recovery for the cultivation of Isatis tinctoria, when the block of commercial relations with England set by Napoleon, known as the Continental Block (1806), also interrupts the import routes indigo making it necessary to recover the techniques, now obsolete, of extracting the blue pigment from local plants. With an imperial decree, money prizes are banned for those who managed to find the best and most profitable methods for cultivating and processing dyer’s woad or to discover another plant from which to extract quality color comparable to that of the Indigofera delle Indie and the Americas.

The color then passed into the hands of the dyers. The techniques of the ancient dyeing procedures, despite their economic and social importance, have remained known only in an approximate way through indirect evidence, such as the accounting books in which quantity and quality of the ingredients used were recorded or the most important Arti medieval statutes ( The art of wool and silk) which controlled the dyeing activity by adjusting it to one’s own needs, therefore, these documents handed down “everything the dyer did not have to do; but more rarely what the dyer should have done; never, or almost never, how it would have worked in practice ”.
The solidity of the color extracted from this plant is proven by the medieval tapestries that have come down to us: the greens of the Bayeux Tapestry have been dyed with dyer’s woad surmounted on the yellow of the minor broom and the blues of the Apocalypse Tapestry have exceeded the centuries.
The dyer’s woad was one of the indigo dyes used, at one time, for dyeing the canvas with which blue jeans trousers were made. Blue jeans, thanks to the fibers from which they are made, are very resistant and were used as a uniform for workers who rubbed on the floor and needed a resistant dress.
As for the edibility, the leaves require a long soak to be used, as they are very bitter and keep a bit of a bitter taste even after boiling. The seeds, even if not edible, contain up to 34% protein and 38% fat.
In reference to its therapeutic value, for internal use the plant has a very astringent effect, it is used externally as a mash or poultice to heal ulcers, inflammation and stop bleeding. The leaves have antibacterial, antiviral, anticancer, astringent and febrifuge properties. The leaves are harvested in the summer and can be used fresh or dried, they are also macerated to extract the blue pigment useful for convulsions, mumps and fevers in children. The root as the whole plant is antibacterial and anticancer.
Today this plant, although almost completely replaced by Indigo (Indigofera tinctoria) and synthetic dyes, is still used to improve the yields of greens, blues and blacks. The oil contained in the seeds is used in cosmetics; with the plant extract the woods can be treated in order to preserve them better.

Preparation Mode –
Today it is possible to buy the blue pigment extracted from the plant by specialized artisans and dye the fabrics by preparing a “color bath” of warm water (55 ° C) with the addition of soda and sodium hydrosulphite.
The dye is extracted from the leaves of this plant collected during the first year of life. After maceration and fermentation in water, a yellow-green solution is obtained which agitates and oxidizes to produce a precipitate (indigotine). The dye, very solid, can be used in the dyeing of wool, silk, cotton, linen and jute, but also in cosmetics and pictorial colors.