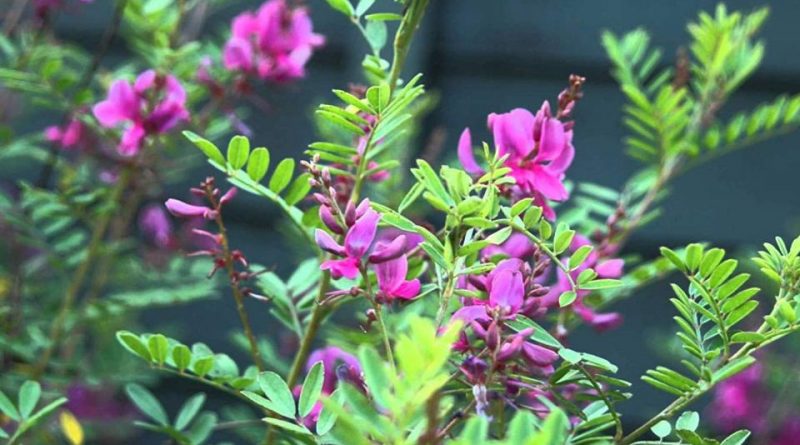 The true indigo (Indigofera tinctoria L., 1753) is a shrub species belonging to the Fabaceae family.

Etymology –
The term Indigofera comes from the Spanish indigo (in Latin indicum, in Greek ινδικος indikos) and from fero porto: therefore it provides the indigo dye.
The specific epithet tinctoria comes from tíngo dye: used to dye fabrics.

Geographical Distribution and Habitat –
Indigofera tinctoria is a plant of tropical origin and is therefore well suited to various tropical climates. The origin is most likely from the areas of India as its native habitat is unknown because it is a plant cultivated for centuries all over the world; subsequently it was spread and cultivated also in China and the Americas before becoming so widespread.
This plant is still spontaneous in Africa, Oceania and most of Southeast Asia and was subsequently introduced in other parts of Asia and the Caribbean, causing a certain environmental impact due to the abundant proliferation of this plant at the expense of crops. 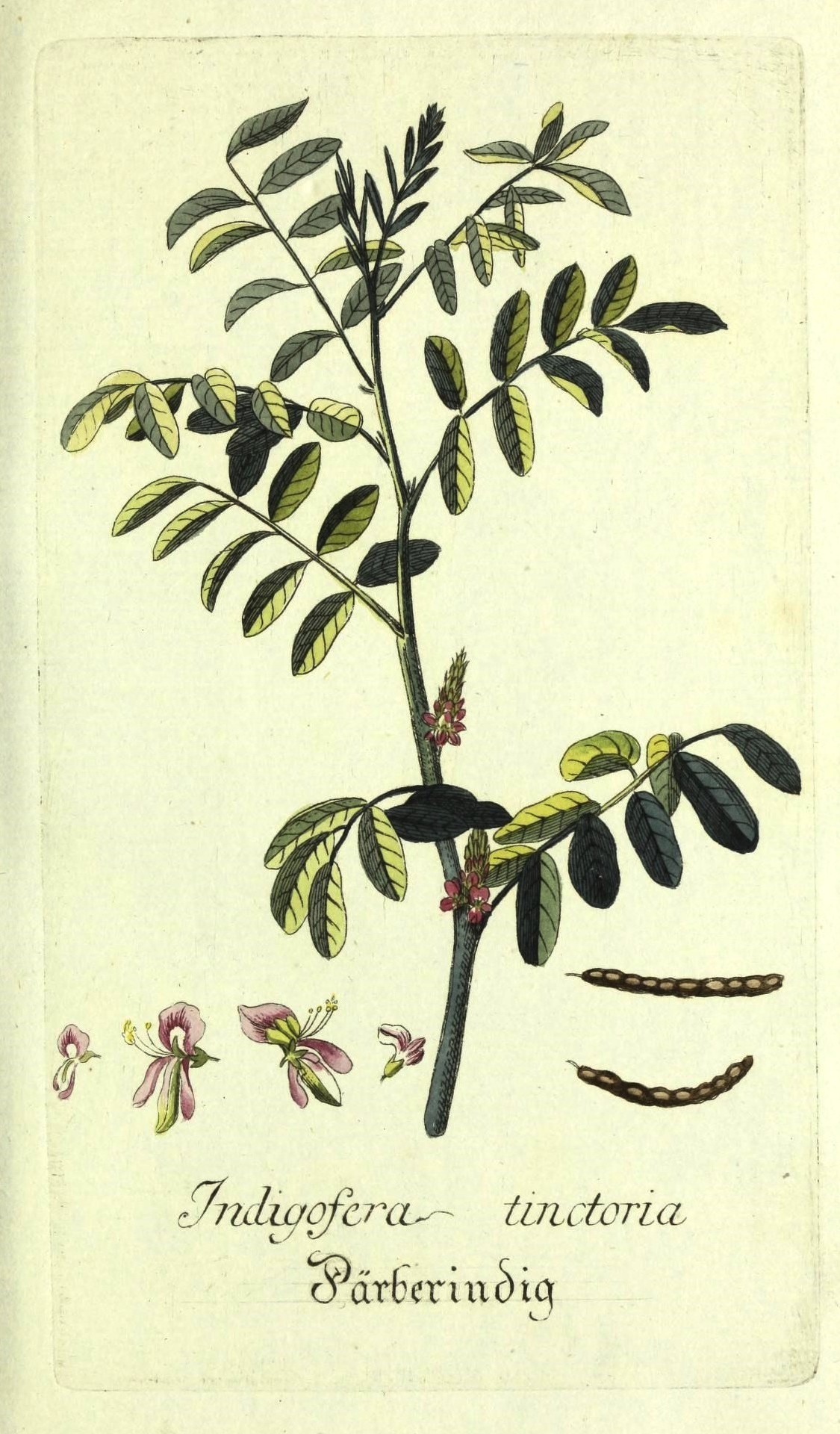 Description –
True indigo is a shrubby plant that can grow from 1 to 2 m in height. It can be present, also depending on the climate, as an annual, biennial or perennial plant.
The leaves are pinnate and light green in color.
The flowers are carried in spike form and colored from pink to purple.
The fruits are long, roundish legumes of brown-reddish color inside which there are small seeds of almost cylindrical shape and brown in color.

Cultivation –
Indigofera tinctoria is a plant that is grown starting from sowing and the best time to do this is spring.
Flowering occurs after about three months. At that moment the leaves take on a purplish color, this is an indication of the fact that the indigo content is high. The dyeing principle, the indacano, is given off by the leaves, which also contain indigo brown and yellow flavonic pigments. The quantity and the percentage distribution of the pigments present varies both from species to species, and depending on the age of the plant. It is thought that the cultivation of indigo, to ensure better results, must be done in a place where the average daily temperature, for three consecutive months, remains at 22 ° C.
Moreover, being a legume, its presence in agrarian rotations improves the soil as well as other atmospheric legumes that fix the nitrogen.

Uses and Traditions –
The history of the use of Indigofera tinctoria is lost in the mists of time. The use of indigo in the coloring of natural fibers dates back to the beginnings of civilization: our Neolithic European ancestors already knew this tinge of bluish tones, although they resorted to using another plant.
The ancient peoples of Asia used it to dye clothes as early as the year 2000 BC, as well as the ancient Egyptians; a Babylonian tablet from the 7th century BC shows a recipe for dyeing the wool with this plant. However, unlike the Asian and African peoples, Europeans did not use indigo as a dye for fabrics but used it in cosmetics, as a medicine and to create coloring pigments for pictorial purposes.
In Egypt during the period of the pharaohs, in fact, the blue color is obtained from the use of the ford (Isatis tinctoria). This dyeing art then spread to Greece and then to Italy, where the Romans intensively developed the culture of Isatis tinctoria. It is interesting that already among the Greeks and the Romans, it was known that in the countries of the Far East there was a very powerful and resistant blue tincture: the indicum or indikon, also called indie blue or indigo. The surprising thing, and that at that time was not even imagined, is that the two dyes, indigo and ford, although obtained from different plants, allow to obtain the same dyeing principle, indigo or indigotine. No coincidence that the term Black Henna is ambivalent in indicating both the indigo, or Indigofera Tinctoria, that the ford, or Isatis Tinctoria.
During the seventeenth century, in fact, with the introduction of the Indigofera, the ford industry suddenly went into crisis because the indigo proved to be economically more convenient. The indigo offered the enormous advantage of eliminating the work processes of grinding and maceration.
Initially in Europe to dye blue was used the ford, Isais Tinctoria (the famous blue by Piero della Francesca), until Marco Polo brought the recipe to dye with the Indigofera from the East.
It was in fact Marco Polo, in the 13th century, the first European to report on the preparation of the indigo in India. Indigo was used quite often in European easel painting, starting in the Middle Ages.
Indian indigo played an important role in the Indian economy as this fundamental dyeing matter, being in the best quality for hundreds of years, was exported all over the world. The real Indigo does not only derive from the plant but from a whole process of fermentation, maceration, oxidation and finally drying of the Indigofera leaves until reaching the famous powder.
The trade of this plant was very favorable for the Asians until the landing of Vasco da Gama in Calicut. From that moment on, Europeans could import it without necessarily intermediarying with Asian markets at cheaper prices; yet its production continued even under the English domination of India.
Today most of the dye is synthetic, but the natural tincture of Indigofera tinctoria is still available, marketed as natural coloring where it is known as tarum in Indonesia and nila in Malaysia. In Iran and areas of the former Soviet Union it is known as a basma. The plant is also widely cultivated to improve the soil.
The resulting dye is obtained by processing the leaves of the plant. They are immersed in water and fermented in order to convert the indicotine of blue dye naturally present in the plant into the blue dye indigotine. The precipitate from the fermented foliar solution is mixed with a strong base such as lye.
The dyeing principle, the indacano, is given off by the leaves, which also contain indigo brown and yellow flavonic pigments. The quantity and the percentage distribution of the pigments present varies both from species to species, and depending on the age of the plant. It is thought that the cultivation of indigo, to ensure better results, must be done in a place where the average daily temperature, for three consecutive months, remains at 22 ° C.
Today Indigofera powder is widely used for natural hair coloring in order to obtain dark or brown shades. Shortly after application, the hair acquires a green / blue tone, while the white hair takes on a reflection tending to ash.
The use of black henna on brown or dark brown hair leads to pleasing results, the starting base will gradually assume eggplant-colored tones. Thus obtaining a dark and brilliant effect on the entire hair.
Within the leaves of Indigofera tinctoria various chemical substances have been isolated such as flavonoids, terpenoids, alkaloids and tannins.
The substance present in the plant is more useful for creating the final pigment, however, it is the indica, a glycoside that hydrolyzes in the wearable and glucose by the action of vegetable enzymes and chemical solutions; the leather is therefore transformed into indigotine (or indigo) due to the action of atmospheric oxygen, whose structure contains two indolic groups.
A substance has also been extracted, indirubin, which has shown a mild antitumor action and is colored red.
In addition to supplying indigo, Indigofera tinctoria appears to have different healing effects.

Preparation Mode –
The true indigo does not directly contain the pigment, which is why it must be obtained by means of a long and complex procedure, which involves a redox reaction.
The procedure for color extraction involves the fermentation of the leaves and stems in a basic reducing solution (from which oxygen must be removed) to obtain the so-called “leuco” form. The next step is the oxidation of the leather obtained from the previous phase through exposure to air. From this process indigo, a water insoluble pigment will be obtained.
The indigo then settles on the bottom of the container used.
The indigo is then heated to completely evaporate the water.