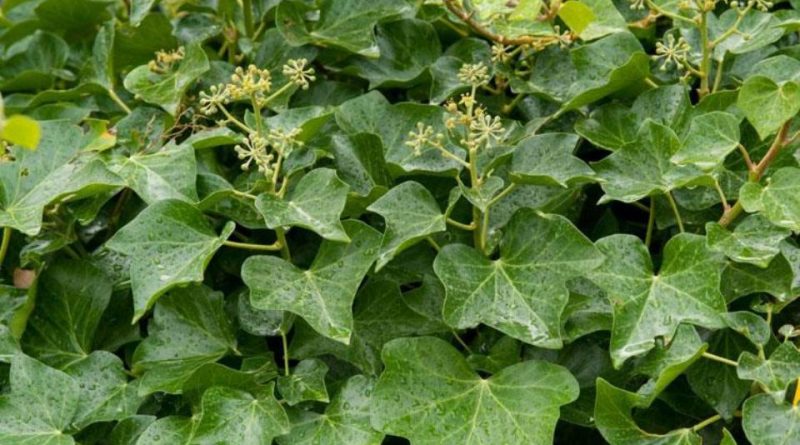 Common ivy (Hedera helix L., 1753) is a shrubby species, an evergreen lianosa from the Araliaceae family.

Etymology –
The term Hedera comes from the Latin name hĕdĕra (in Pliny and Virgil), assonant with hadaéreo adhere.
The specific epithet helix comes from the Greek ἔλιξ -ῐκος helix –ikos twisting, spiral: in reference to the stems that wrap around each other by twisting.

Geographical Distribution and Habitat –
The common ivy grows close to ruins, on trees but also in shady undergrowth, both in creeping and clinging form.
In Italy it is present throughout the territory and its habitat is that of an ubiquitous plant, invasive, vegetating spontaneously and clinging to walls, rocks, trunks, or adhering to the ground, becoming ground cover, always preferring cool, damp and shady places where it can grow from 0 to 1,450 m asl. 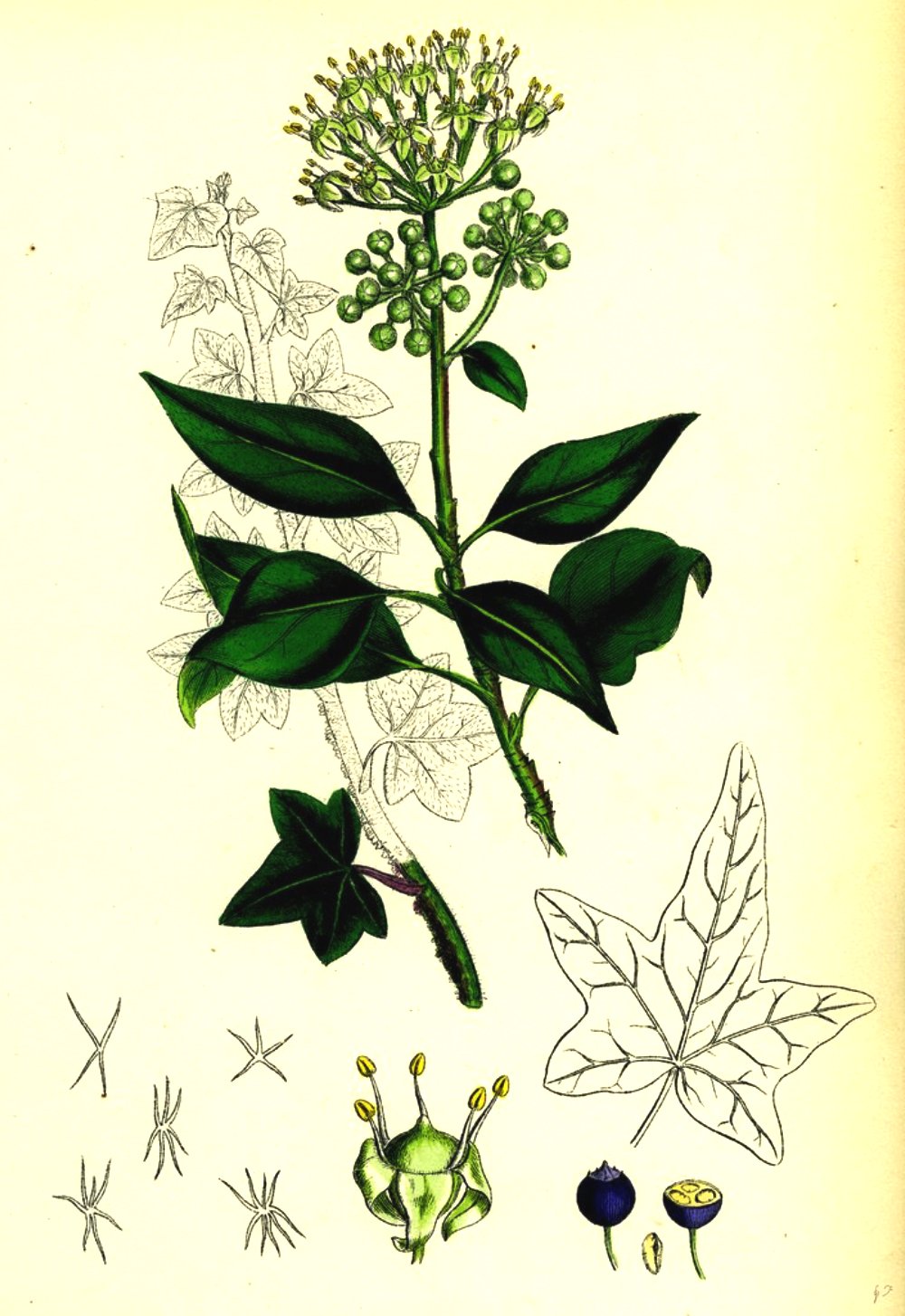 Description –
Hedera helix is ​​a shrubby plant, evergreen lianosa, climbing or creeping on the ground and rooting.
It has twining stems that adhere by means of adventitious roots, emitted at the nodes of the ramifications, to any element that allows their vertical development, where this does not occur they assume creeping behavior by adhering to the ground.
The stems have a herbaceous consistency when young to become semi-woody and hairy over time due to the presence of adventitious roots.
The bark is first smooth and glabrous, then rough, to become, in the older ones, greyish and fissured.
The plant can reach up to 20 m in length.
In the non-floriferous branches we find characteristic leaves with 3 or 5 lobes of light and dark green color, ideal for covering walls or trunks of trees. In the flowering branches the leaves are instead rhomboid-shaped ovate.
The flowers consist of five green petals gathered in spherical umbels. The first flowering occurs at about 10 years of age.
Flowering occurs between September and November and the first berries ripen in November and remain on the plant all winter.
The fruits are ovoid globose berries, first green, then reddish, black-bluish when ripe, containing 2 or 3 kernels with paper endocarp. The seeds are oblong, wrinkled and reddish.

Cultivation –
For the cultivation of the common ivy remember that the ideal temperature is around 15 ° C, while the minimum winter temperature is between 0 and 7 ° C.
In winter, the plant prefers fresh environments, although there are varieties on the market that are also suitable for heated environments (eg Golden Gate and Golden Ingot).
Light requirements also vary with the different varieties. It should however be kept in mind that plants with mottled leaves need more bright environments than those with dark green leaves, which can adapt to much darker places, such as entrances or corridors. Ivy with variegated yellow leaves also bear direct exposure to the sun’s rays. From April to May until the autumn the plants can be brought to the open, in order to strengthen them and improve their possible variegations.
For the details of the cultivation technique the following sheet can be consulted.

Preparation Mode –
The common ivy can be used for many healing purposes but, due to its toxicity, it is advised not to use its herbal remedies, without prescription and medical supervision.
For internal use it is used in case of gout, rheumatic pains, whooping cough, bronchitis.
For external use in case of rashes, swelling of the tissues, varicose veins, painful joints, neuralgia, burns, warts, scabies, impetigo, cellulite.
It is one of the plants useful for combating skin blemishes caused by cellulite and the drawbacks of oily skin. The extract of Ivy has a strong cosmetic toning action on all parts of the body that tend to relax and lose tone, the astringent action, favors the reabsorption of liquids; for these properties, it is present in numerous preparations for topical use such as creams, gels and muds against the formation of cellulite.
For a relaxing foot bath soak some chopped leaves in hot water. To restore color to discolored black clothing, dip the clothes in an infusion prepared with 40 leaves and a liter of water, leaving them for about 2 hours before rinsing; boiled leaves with the addition of soda can be used as a soap substitute for washing clothes.
To make dark hair shine, use a rinsing mixture of 3 ÷ 4 leaves for every dl of water.
Finally, remember how the ash obtained by burning the branches of this plant is an excellent polish for silverware.