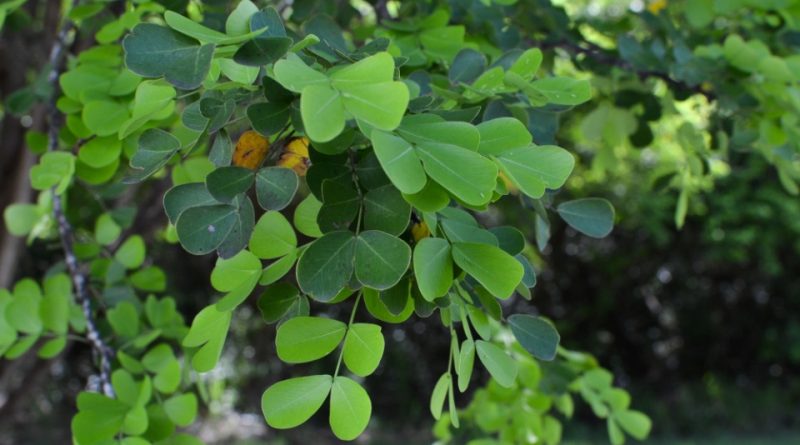 Systematics –
From the systematic point of view it belongs to the Eukaryota Domain, United Plantae, Magnoliophyta Division, Magnoliopsida Class, Fabales Order, Fabaceae Family, Caesalpinioideae Subfamily and therefore to the Genus Haematoxylum and to the H. Campechianum Species.

Etymology –
The term Haematoxylum comes from the Greek αἷμα haima, blood and from ξυλον xylon wood: that is from the reddish wood.
The specific epithet of campechianum refers to the region of Campeche, in the Yucatán peninsula (Mexico).

Geographical Distribution and Habitat –
Logwood is a plant native to Central America and the northern coast of South America and widespread in particular in the region of Campeche, in the Yucatán peninsula, in Mexico, from which it takes its common name.
Its habitat is represented by low, sandy lands, subject to periodic floods that occupy the entire coastal strip of the Yucatan.
This species, widespread in Central America and the Antilles, was introduced by humans to the Hawaiian islands where it is now naturalized. 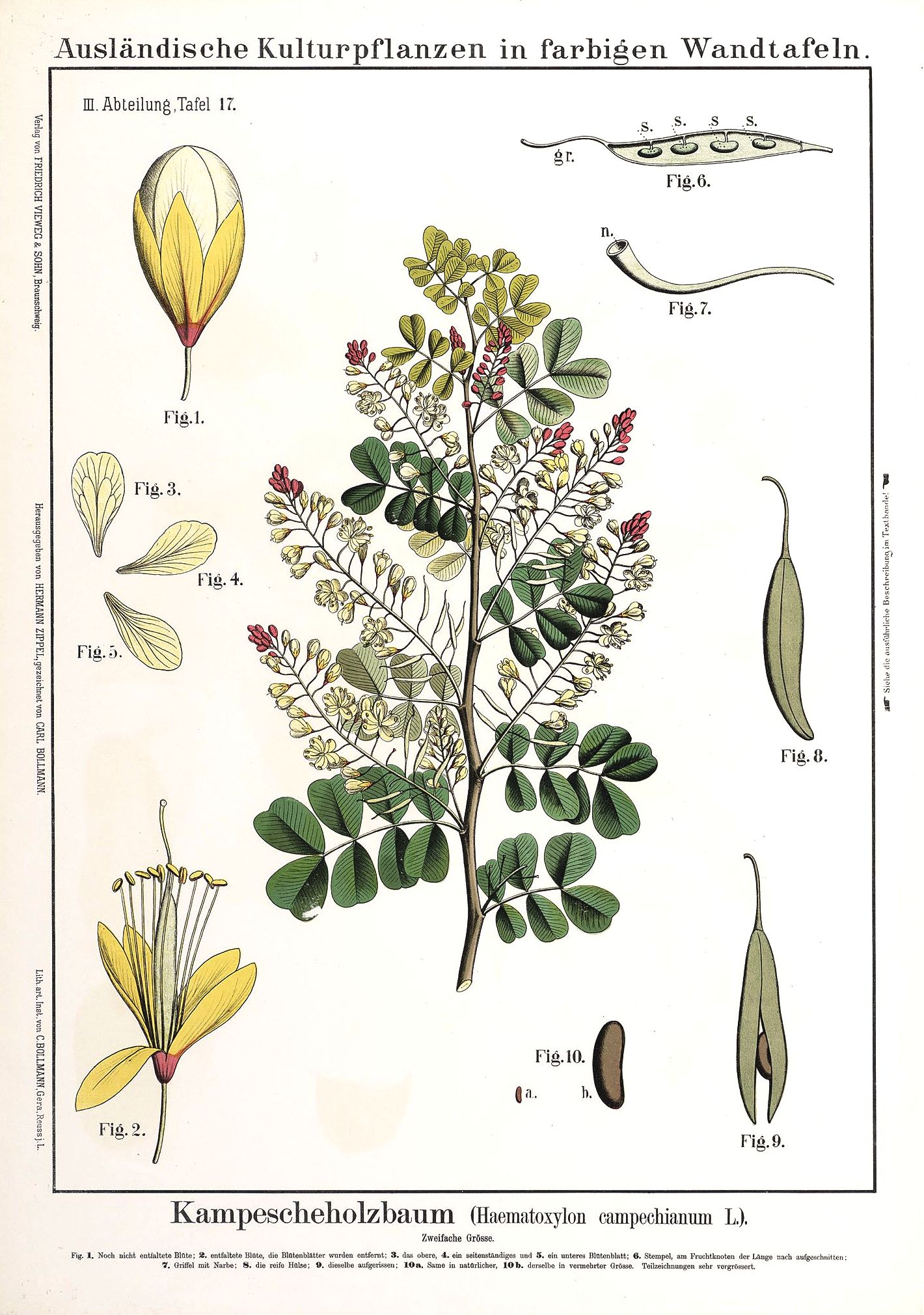 Description –
Haematoxylum campechianum is an evergreen plant that comes in the form of a large tree, up to 15 m tall, but also in shrub form.
It has a reddish trunk and lumber, which with age becomes twisted and knotty, and thorny branches and a slight violet scent. The trunk grows in a particular way; in fact, like many tropical trees, near the roots it develops supports that wrap the trunk up to the top; the older specimens seem in fact many trunks grown together.
The leaves are from 2.5 to 7.5 cm long, formed from three to 5 pairs of leaflets 1 to 3 cm long and 1 to 2.5 cm broad.
The flowers have 5 petals and a whitish corolla.
The fruits are drupes about one cm wide.

Cultivation –
The Logwood is a plant that is characterized by a long history for its hoarding and its exploitation and that in any case, at first it was characterized by the use of plants in their natural habitat and that was later cultivated above all in South America and it is still cultivated in these regions as well as in the West Indies, Brazil, India, Ghana and Madagascar where it was imported and easily adapted.
For its cultivation are therefore necessary climatic and soil conditions very similar to those of its original habitat. However given the relative ease in making it grow, the cultivation of Logwood has been included in numerous programs of sustainable agriculture in various areas of the Caribbean still plagued by poverty: thanks to this plant and its continuous demand on the market, many families have very low income can now count on the revenues deriving from the entire production chain of the dye.

Uses and Traditions –
The species was already known to the Aztecs, who called it quamochitl and extracted a coloring dye.
The sap of the trunk of Haematoxylum campechianum is red-brown and if the trunk is incised, the tree causes abundant sap to heal the wound; once dried, this sap is very similar to congealed blood: hence the Latin scientific name. The flowers are rich in honey and therefore constitute a great food richness in its ecosystem. The dye is present in the internal pulp of the trunk in the form of hematoxylin which, oxidizing, turns into ematein and gave the large debarked stumps a dark purple, almost black color.
This plant was first discovered by the Spaniards in the Bay of Campeche. Soon the wild cut begins to exploit its qualities.
The field arrived in Europe cut into large barked pieces (hence the English name Logwood).
To extract the dye the buffing of the wood was moistened and it was exposed for some time to the air to make it ferment. Then it was boiled with water and the extract was prepared by diffusion in a way similar to that followed for the extraction of sugar. The neutral solution is brown-red, but passes to intense violet if it is alkaline, to dark red if it is acid. Stannous chloride gives violet lacquer, with iron salts it becomes black tending to blue (through a range of grays as the concentration of the bath is exhausted), with alum and violet sodium carbonate, with blue copper salts purple.
Due to these characteristics, its application in dyeing began in Spain in the early 16th century and soon spread to other European countries; at that time, however, the methods of etching were not yet perfected so that the blue obtained from this plant turned out to be very unstable and England, for example, in 1581 forbade its use and the ban was raised about a century later.
Genoa also forbade its use in the dyeing of silks; in Venice the use of this plant for dyeing in black was granted after many pressures and only for the silks destined for export in the countries of Northern Europe.
It was however in the 16th century that this plant was fortunate and used more and more, linked to the diffusion of the black color during this century, when it became the color of the Reformation, as the official color of the court of Borgona first and then of Spain where Charles V adopted it as a symbolic color of the moral virtue of the sovereign; the counter-reformists in turn will adopt black as a sign of renewed Catholic morality; the portraiture of the late ‘500 and of the’ 600 confirm the domination of the black color.
We have a moment of transition in the 1700s and then return again as a “uniform” of the bourgeois citizen, morally intact and faithful to the institutions and to work: so for almost the entire nineteenth century and a good part of the black and gray XX are the colors for excellence of the male dress.
It is obvious that the campeccio, faced with this sea of ​​black, played an important role.
The processes of fine-tuning the various colors obtained were long and laborious. The best of the Logwood’s potential was discovered around 1840 when it began to use chrome stains; furthermore, the method for extracting the extract was perfected; its use extended considerably both in North America and in Northern Europe. From a careful analysis conducted on English silks produced from 1880 to 1910, it appears that this plant was used for 80% of the black colors.
Used for silk also in combination with other dyes, it gave particularly appreciated hues, notes of color, although always in line with the sobriety required also to the color of the feminine dress: dark purple, dark blue, if mixed with cochineal it gave the chocolate color and a very fashionable reddish brown in Victorian England; various shades of green were obtained with the addition of grains of Avignon grains (Rhamnus Saxatilis berries) or indigo carmine.
Logwood is among the few products that have really survived long after the entry of artificial colors; according to the research of Dominique Cardon, in the year 1943 in the world more than 70,000 tons of Logwood were still being used annually and it is estimated that in 1995 the average extracted in Europe was 600 tons, the corresponding roughly 12,000 tons of wood . It should be remembered that haematine is still among the most important contrast liquids in histological examinations.
The exploitation of the campsite is linked to an endless series of guerrillas and battles between the Spanish and the English; the latter, when their bases could no longer pass unnoticed along the northern coast of Yucatan, where the Spaniards had strengthened surveillance: they then moved to the southwest of the peninsula, in the coastal area of ​​present-day Belize, establishing a substantial settlement there. The long struggle for the occupation and defense of the territories of south-eastern Yucatan occupied by English cutters was of fundamental importance for the history of the present state of Belize, first officially become an English colony under the name of “British Honduras” and then became independent state in 1981: the national flag is a tribute to the field and mahogany cutters, the two trees that made the wealth of the country.

Preparation Mode –
The wood of Haematoxylum campechianum, in addition to its use in cabinet making, is used, as mentioned, as a dye: once it is ground, it is fermented and a dark substance is extracted by boiling. With different processes, shades are obtained ranging from deep red, to black and blue, both to dye fabrics and to produce lacquers. Furthermore, those who have attended some biology labs, either as a student or even afterwards, should remember that one of the most important colorants in the preparation of histological slides is that called hematoxylin; when it becomes haematin combining with aluminum and oxidizing permanently, it is capable of coloring the nuclei of cells and the related chromosomes.
Furthermore, the use of Logwood dust to reflect hair has turned out to be a real unicum, in the sense that it gives unique and characteristic shades. In a mixture with other herbal powders (Mixture of walnut, Red Henna, Black Henna) it takes on chestnut-brown bottoms of copper-brown notes with considerable coverage even in the presence of white hair.