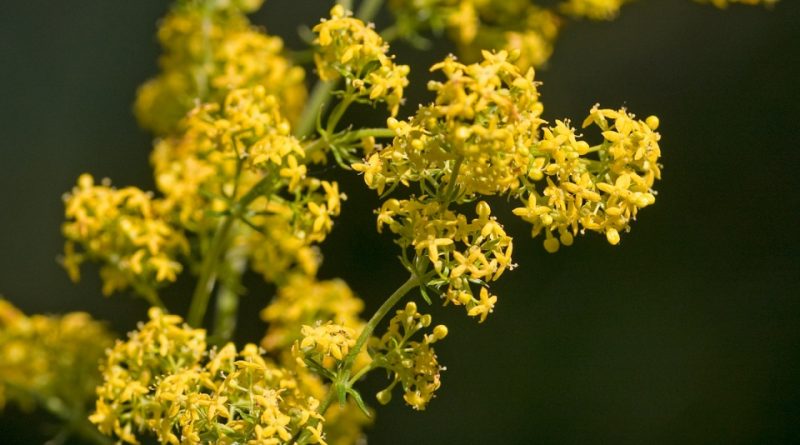 The Ladys Bedstraw (Galium verum L., 1753) is a perennial herbaceous species belonging to the Rubiaceae family.

Etymology –
The term Galium comes from the Greek γάλα gála latte: because some species belonging to this genus were used to curdle milk.
The specific epithet verum derives from true, genuine, correct, original.

Geographical Distribution and Habitat –
The Ladys Bedstraw is a plant with complex origin but certainly Eurasian and which was later naturalized also in the temperate climate regions of the eastern United States.
In Italy it is widespread and present throughout the territory.
Its habitat is that of the scrub and arid meadows, of the anthropized areas, of sandy and stony places; it is a species that is basically calciophilic and basophilic and grows up to about 2000 m s.l.m .. 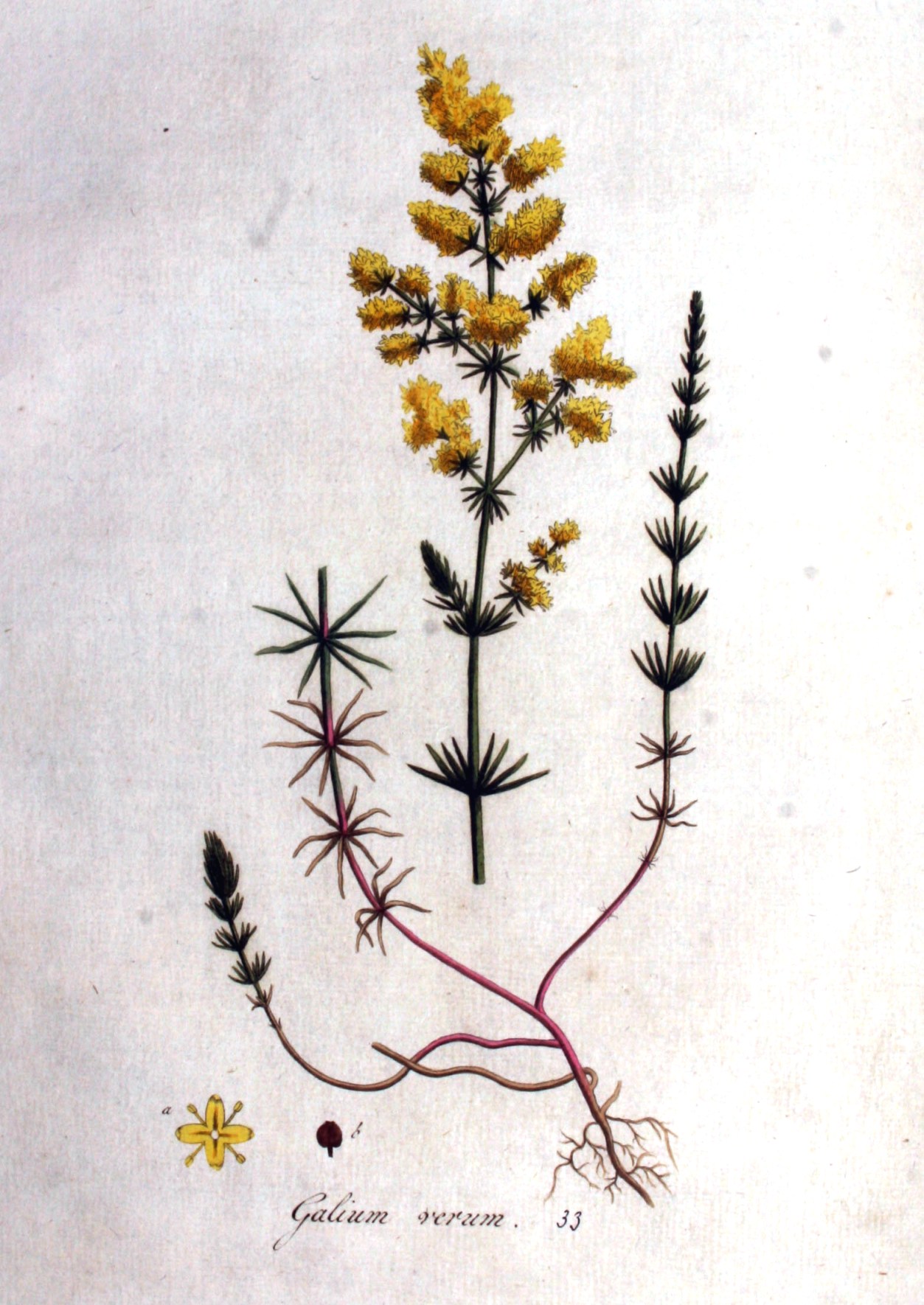 Description –
Galium verum is a perennial, herbaceous, rhizomatous plant.
It has erect or ascending stems, which grow up to 20 – 120 cm, cylindrical in the basal part and tetragons in the upper part, simple or little ramified and with erect-patent branches, glabrescent, crossed by 4 lines of hair turned upwards.
The leaves are 1 – 2 mm wide and 15 – 20 mm long and are gathered in verticils of 8 12 elements placed at the nodes of the stem, sessile, linear or filiform, acute and mucronate, shiny above and pubescent below, revolute at the margin, with an evident central rib and leathery consistency.
The inflorescences are up to 30 cm long, in thick egg-shaped panicles, erect, both terminal and axillary, carried by peduncles of 2 – 3 cm. the bracts in the inflorescences are similar to the leaves.
The single flowers, carried by short peduncles, are hermaphroditic, actinomorphic, tetramers of yellow color. The corolla is glabrous on the outside, of 2 4 mm, it is rotated with a short tube, divided into 4 acute lobes, between which 4 stamens are interspersed with brown anthers; the ovary is inferior to 2 loculi; a stylus with globose or capitate stigma.
The anthesis is between May and September.
The schizocarpical fruit is an achenary with 2 mericarps of 0.8 -1.8 mm, oblong or ovoid, blackish, glabrous or rarely puberulic, smooth or even wrinkled. Each fruit contains a seed.

Cultivation –
The cultivation of this plant dates back to many centuries ago and its use was not limited only to the food field but also to the medicinal one.
For its cultivation, it must be taken into account that it prefers calcareous soils with a pH that tends to be basic.
In the garden the ideal position is in drained, fertile, humid soil and not in a completely sunny position. It is considered an invasive plant.
Galium verum can also be grown in pots or left naturalized in a border of wild flowers.
As far as reproduction is concerned, it is advisable to work instead of dividing the rhizomes, as the plant is quite sensitive to transplants, starting from the seeds. These should be collected at the end of flowering and immediately sown in a vase containing a soft and well-drained substrate. The birth takes place in a few weeks, and the seedlings can then be transplanted with the whole sod directly in the following spring.

Uses and Traditions –
Galium verum was used in the past for various purposes, for example to fill mattresses with dried parts, or to remove insects (it seems that it kills fleas).
The use of this plant in herbal medicine has a long history even if today it is almost zero. In ancient times it was a herb used for the coagulation of milk, while today rennet is extracted from the abomasum of suckling calves.
This plant, moreover, like other Galium, has dyeing properties. From it we get the yellow from the flowers, which is used as a food coloring, or to dye the handcrafted fabrics, as well as the red color that is obtained from the roots.
The Ladys Bedstraw, as mentioned, is a medicinal plant as it has an antispasmodic and calming effect: in particular, in case of poor digestion due to causes of nervous origin, it plays a relaxing action on the muscles of the organs that regulate the digestive processes . It is a light diuretic and its use is particularly indicated in the treatment of urinary tract diseases, in case of renal lithiasis, cystitis, fluid retention, edema and obesity. For external use the rennet has a healing action, favoring the healing of wounds, cuts, abrasions, erythema and bruises.
Once it was also used to dye fabrics in yellow, using flowers, or in red, using the roots.
Furthermore the different species belonging to the genus Galium contain asperuloside, which produces coumarin, a substance that gives the dried leaves a characteristic odor of freshly cut hay. Asperuloside can be transformed into prostaglandins, substances similar to hormones, making this plant of great interest for the pharmaceutical industry.
The main constituents are: galisoline (anthraquinone glycoside), asperuloside, tannins, aucubine, flavonoids, saponin, asperulina, various organic acids, phytochemase, an enzyme responsible for the coagulation of milk and mineral salts.
Galium verum is used in gardening as it can create pleasant colored spots both for borders and hedges.
It is also a food plant for larvae of different species of butterflies.
Among the various possible uses, it should also be remembered that from the flowers coloring substances are obtained (respectively red and yellow if boiled with alum) but repellents can also be obtained.

Preparation Mode –
For his need to collect the flowering tops during the period of maximum flowering, which coincides with the months of June and July, sever the flowering stems 10 cm lower than the inflorescences and eliminate any dry leaves. Bring together the flowering tops in small bunches and dry them as quickly as possible, in the shade and in an airy place. Finally, store in tightly closed glass jars or containers, away from dust and moisture. Remember that it is an astringent, sour and slightly bitter herb.
In the alimentary field, a white liquid emerges from the stem which is used as an enzyme (the phytochimase) for the coagulation of milk in the production of cheese.
In some areas fruits such as coffee are used (the seed can be roasted with the same procedures as coffee) and with the aerial parts of the plant (the flowered tops) drinks are made
The infusion of zolfino rennet is also used in some liqueurs and digestive bitters.
The tender shoots can be eaten raw alone or mixed with spring salads.
Instead, the flowering tops of the plant are used for medicinal purposes.
Let’s see some preparations and methods of use:
– Infusion for internal use: pour a liter of boiling water in a porcelain container containing 10-20 g of flowered tops of rennet dried and finely chopped, leave to infuse for 20-30 minutes, then strain and take 2-3 cups during the day according to the indications.
– Infusion for internal use: pour over 40-50 g of dried flowering tops of Caglio and chop roughly a liter of boiling water, leave to infuse for 30-40 minutes, then strain and use to wash and apply compresses and compresses.
– Cataplasms: crush in a mortar the desired amount of fresh flowering tops of Caglio until obtaining a pulp, apply the pulp thus obtained on the affected areas interposing a gauze.
– Poor digestion due to causes of nervous origin, epilepsy, hysteria: with calming and antispasmodic action, if necessary during the course of the day, take three cups of flowering tops, if you want to sweeten only with a teaspoon of honey. If the problems become serious and serious seek medical advice immediately.
– Cystitis, edema, dropsy, renal lithiasis, urinary tract diseases, obesity problems, tissue fluid retention: to improve diuresis, take 2-3 cups a day of infusion of flowering tops, if in the arc of 2-3 days the first improvements are not observed consult the doctor.
– Bruises, dermatoses, lymphatic gland tumors pains, erythema, rashes, wounds, small sores, cuts: to facilitate the healing process, carefully wash the painful areas with the Caglio infusion for external use, also apply on the affected areas packs or tablets soaked in the same infusion, or apply poultices leaving for 30 minutes. If the tissues do not start healing, consult your doctor.
– To increase milk in women during the period of breastfeeding: an ancient remedy of great efficacy consisted in administering to women during breastfeeding 2-3 cups a day of infusion of flowering tops of Caglio.
– As a natural insecticide: use the whole dried rennet plant in small bunches to keep away flies, bedbugs and other annoying insects, its action will be more effective if associated with fern fronds.
– For the production of cheeses: to try to prepare homemade cheeses, the Caglio is essential for the coagulation of milk. Prepare a highly concentrated decoction of the entire Caglio plant (excluding the rhizomes). Boil 80-90 g of plant in a liter of water, after 10-15 minutes from the start of boiling remove from the heat and let stand for 20 minutes, then filter. Add the decoction prepared in this way to boiled milk and leave to rest in a cool place. The cheese prepared with the rennet decoction will take on a typical greenish or golden-yellow color.
– Pot-pourri and perfumed sachets: the small yellow flowers exhale a delicate aroma reminiscent of honey, while the dried leaves smell of freshly mown hay, adding the dried flowers and leaves of Caglio to a mixture, composed of Lavender, Monarda, Rose petals, Peppermint “citrata” and Melilotus can be used to prepare pot-pourri and perfumed sachets with a delicate country fragrance.
– Dyeing for wool and cotton garments: the lower rhizomes and stems of the plant give a dye of red and coral pink, in these cases prepare a highly concentrated decoction and use alum as a mordant. With the flowers you can instead get a delicate dye of golden yellow color, even in these cases prepare a decoction of concentrated flowering tops.
This plant, especially during the Middle Ages, was used to prepare stuffed meats and other typical foods of the era, its flowers also give the preparations a delicate and intense aroma of honey. Today it is still widely used for the preparation of cheese thanks to its ability to “curdle” the milk.