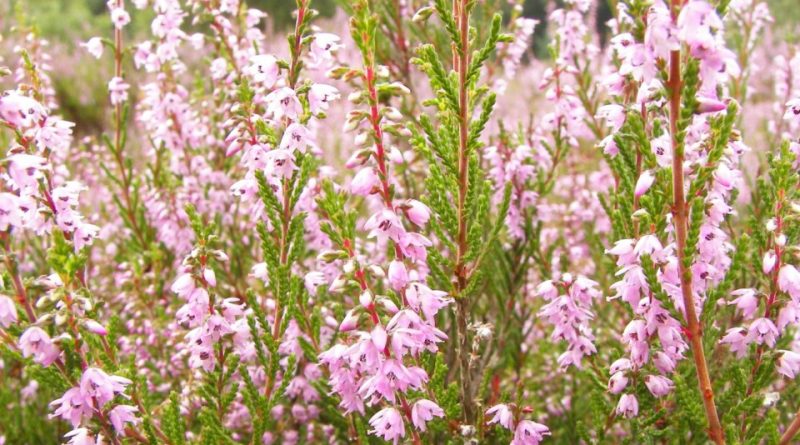 The Heather (Calluna vulgaris (L.) Hull, 1808) is a perennial herbaceous species belonging to the Ericaceae family.

Etymology –
The term Calluna comes from the Greek καλλύνω kallúno fuck: its branches are used to make garden brooms.
The epithet sepcifico vulgaris comes from the Latin da vúlgus volgo: very common, ordinary due to the wide spread, banal.

Geographical Distribution and Habitat –
The Calluna vulgaris is a fairly common plant in Europe, in Western Siberia, in Asia Minor and in North America where it grows in cold and temperate / cold areas with good rainfall and restricted summer periods.
In Italy it is common in the central-northern areas, rare in the central Apennines, absent in the south and islands. In particular it is common in the landscape of the moors at the foot of the Lombard Pre-Alps, or in the area of ​​Vercelli’s baragge.
Its habitat is that of well-drained acid soils, in full sun or partially in shade, in coniferous and peat-bog forests with an altitude spread from 0 to 2500 m s.l.m ..
The Heather was introduced in New Zealand and has become a pest in some areas, for example in the Tongariro National Park, where the plant reproduces in an enormous way. To stop the propagation of brugo, Lochmaea suturalis was introduced; the first attempts have been partially successful. 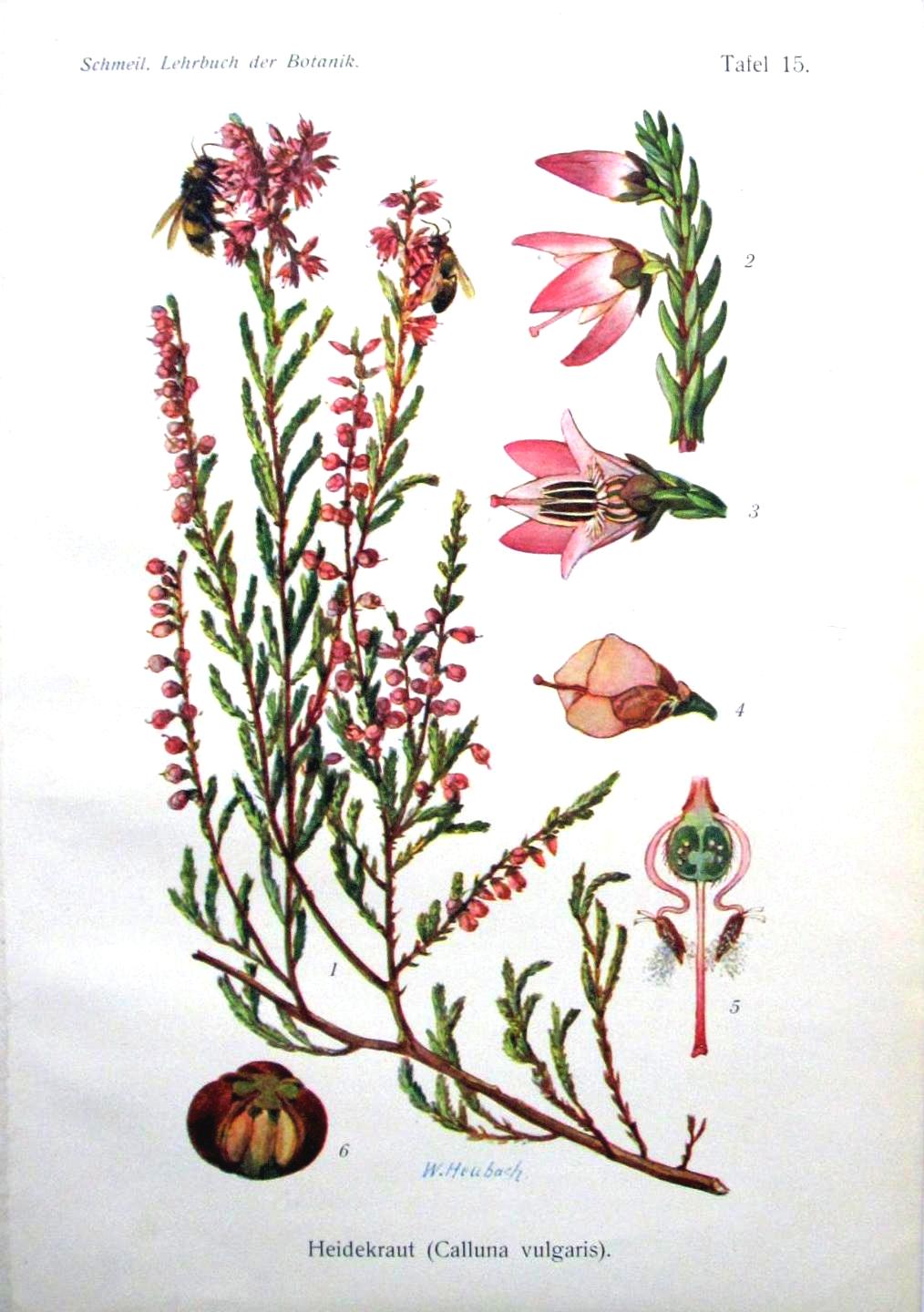 Description –
Heather is a suffruticosa plant, often herbaceous and perennial, which develops for a few tens of centimeters (25-50 cm) also in width and height, and is a coniferous and evergreen tree.
The stem is woody, tenacious, hairless with a prostrate pattern, somewhat branched and intertwined enough to cover the surrounding soil in a compact and dense manner.
The leaves are sessile at the base, with two small orecchiette and are needle-like evergreens, opposite and alternate as a pair (ie each pair appears in an alternating position with respect to the previous one), densely imbricated in 4 longitudinal rows with triangular section and lanceolate-squamiform shape ; with dimensions of 2–3 mm in length and 0.7 mm in width.
The flowers are gathered in unilateral apical raceme inflorescence (the various flowers are all facing from the same side). In apical position together with the flowers there are some leaves (bract type) and the flower spike is from 20 to 30 cm long.
The color of the flowers, in the wild specimens, is usually on purple or mauve color but also rosy (rarely white) and are slightly pendulous. The flowers are hermaphroditic, actinomorphic and tetrameric (corolla and quadripartite chalice).
The calyx is gamosepal, membranous (whose length is greater than the corolla) and is formed by 4 lobes (petaloid sepals) 4–6 mm long and not entirely welded. The color is the same as the corolla. The petals are half the size of the sepals and are welded for two thirds. The corolla is gamopetala and is bell-shaped and only partially comes out of the glass and has a size of 2–3 mm.
The androceum is composed of 8 stamens with aristate anthers and two reflex appendages.
The gynoecium is composed of an ovary exceeding with only one very long stylus that comes out conspicuously from the flower.
The anthesis takes place at the end of the summer but at low altitudes it can flourish until November.
Pollination is entomophilous, through butterflies or moths, bees and wind (anemophilous); this last way of pollination is typical of the first periods of flowering of the plant.
The fruits are tetralocular capsules that contain a small egg-shaped seed for each niche.

Uses and Traditions –
The Calluna vulgaris is known in Italy with the common names of Brughiera, Scopetti, Grecchia and Brentolo.
It is a plant that has various pharmaceutical properties, including: astringent, vasoconstrictor, antiseptic of the urinary tract, diaphoretic, anti-inflammatory, antirheumatic.
The active ingredients present in Calluna vulgaris are: arbutin glucoside, tannins, fumaric acid, various bitter substances, hydroquinone arbutase, leucodelfidina, ericin, eucalyptol.
Heather, in folk medicine, is used (via decoctions) in disorders of the urinary tract (cysts and leucorrhoea) as it facilitates urinary secretion. But it is also used in cases of intestinal inflammation (the tannins have a good astringent power). Too high doses are not recommended as they can cause irritation.
It can be used externally in the form of washes, to mitigate infections of the buccal apparatus.
From the ecological and food point of view of this plant, which is melliferous, a very dark monoflora honey is produced in the areas where the plant is widespread, which are rather limited in Italy (Piedmontese Alps) but more extensive in northern Europe, northern America and New Zealand. The honey produced by brugo is thixotropic: in other words, it is normally in the form of a gel, but when subjected to agitation it becomes fluid; back gelatinous if left to rest. It has a high humidity compared to other honeys.
This plant can be cultivated for industrial purposes obtaining tannins and dyes but also for craft purposes, with the same purposes and using woody and flexible drums for the preparation of brooms.
The Calluna vulgaris plays an important ecological role in that, in addition to being a melliferous plant, it tolerates moderate grazing and is able to grow again after occasional fires. Furthermore, this plant is an important source of nutrition for various animals such as sheep or deer, which can feed on the tips of the plants when the snow covers the low vegetation. The partridges feed on young shoots and seeds. Both the adult and the larva of the Lochmaea suturalis beetle feed on them and can cause the death of the plants. The larvae of numerous lepidoptera species also feed on the heather.
In Scotland this plant is the national flower, the second after the thistle. It is also the national flower of Norway. His English name, Heather, is used as a female first name.

Preparation Mode –
From the Calluna vulgaris an excellent monoflora honey can be obtained, besides in addition to the industrial and pharmaceutical uses, through its flowers, can be extracted coloring principles used in various procedures.