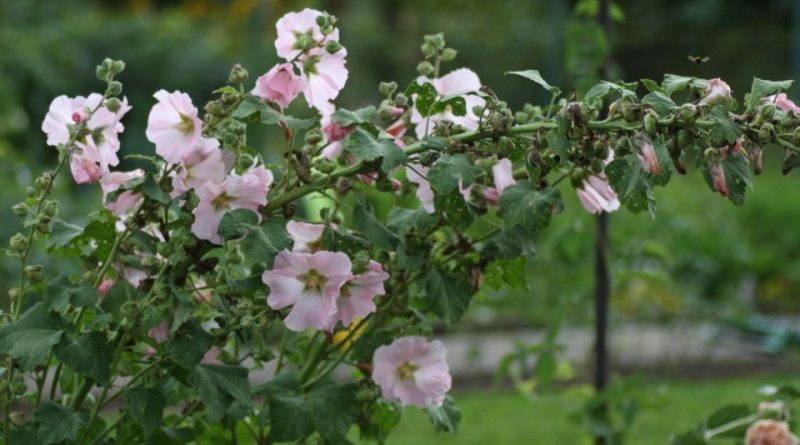 The common hollyhock (Alcea rosea L., 1753) is a herbaceous species belonging to the Malvaceae family.

Etymology –
The term Alcea derives from the Greek ἀλκέ alcé remedy; according to some texts ἀλκέα alcéa was the name mentioned by Dioscorides of a type of mallow.
The specific rosy epithet refers to the pink color, from pink to pink to the color of flowers.

Geographical Distribution and Habitat –
Alcea rosea is a species of uncertain origin; it was introduced in Italy as an ornamental plant and today it is present as an adventitia in all the regions except in the Valle d’Aosta.
Its habitat is quite varied and is a rustic plant with vigorous development, capable of vegetating in the wild even in extreme conditions (roadside, dry lands). 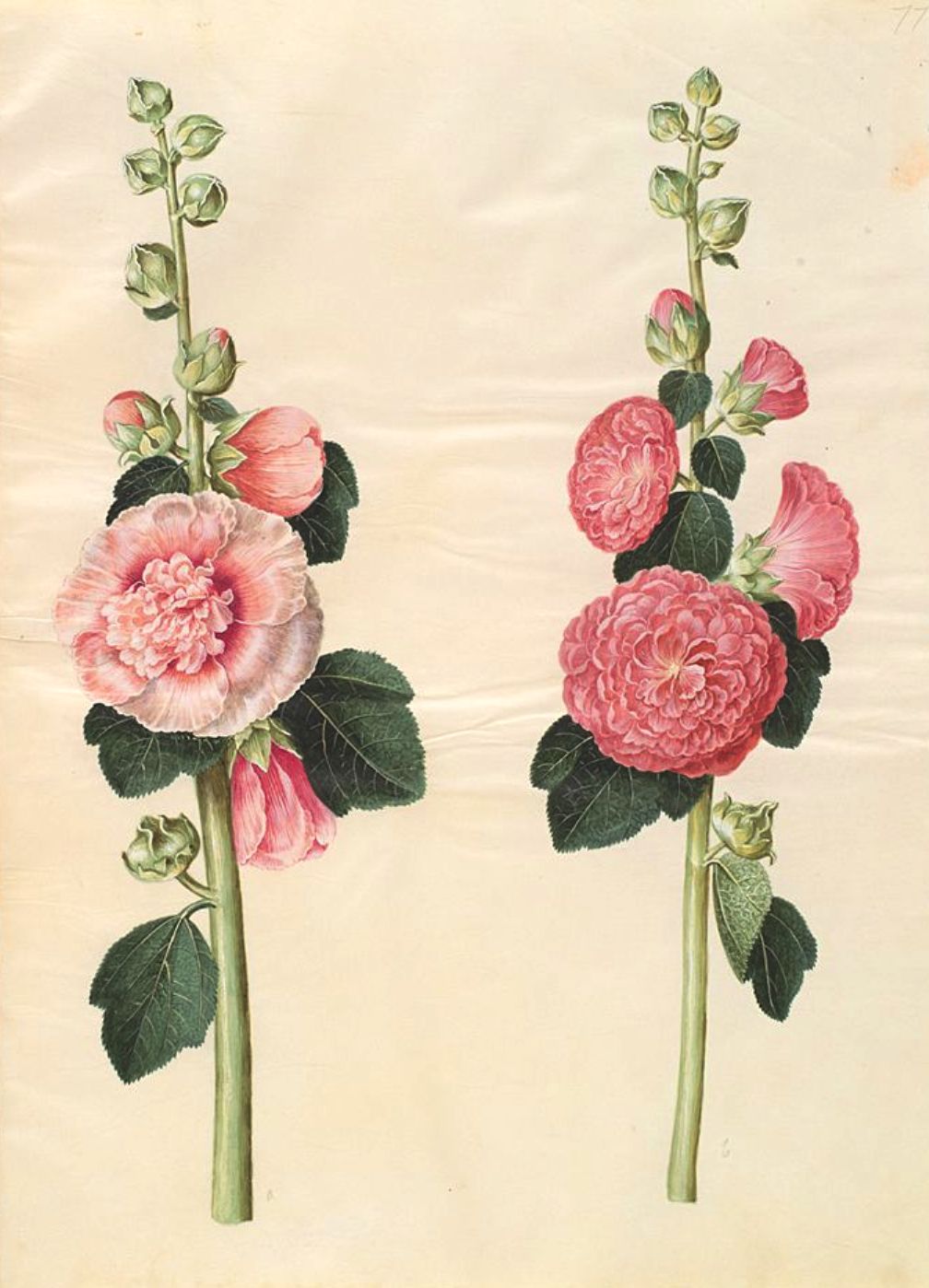 Description –
The common hollyhock is a plant that has a stem with an erect habit that can develop up to 1.5-2.5 m and even more.
The leaves are covered with a thick hair that makes the plant bristly to the touch; these are large, alternate, ovate-lobed and bullous.
The flowers are axillary, with colors ranging from white to pink to red, even mottled; there are also varieties with purple, blue and almost black flowers.
The flowering period is between May and August.
The root of the plant is a white fleshy taproot that creeps easily at great depths (about 1 m) even in compact and stony soils and which contains active ingredients useful for numerous pharmacological indications.
The fruit is a camarium, a discoid schizocarp, puberulus, of about 2 cm, with (20-40) indehiscent, reniform, centrally swollen, 5-8 x 4-6 mm, of dark brown color, furrowed and slightly provided with two wings narrow on the densely hairy back, while the lateral surfaces are streaked and with hairs appressate. Irregularly reniform seeds of 3.3-3.7 x 2.7-3 mm, glabrous, brun or-greyish.

Cultivation –
Alcea rosea is an annual or biennial plant.
It has a very rapid growth in the period from spring to summer, a period in which one or more vertical stems bearing the inflorescences, which quickly reach a height of 1.5 – 2.5 m or more, rise from the basal rosette.
Flowering lasts until the beginning of autumn. In the first winter colds the stems dry up and the plant is reduced to a low (20 – 30 cm) globose tuft of characteristic camephites, the form under which the plant winters in the evergreen state.
For the cultivation of the plant we recommend a sunny and sheltered from the wind; moreover it does not tolerate cold winter temperatures.
The soil must be of medium texture, deep and well drained, composed of a common garden soil mixed with 2/3 of universal soil and 1/3 of sand.
For water supplies, watering, even if moderate, must be regular and constant, especially during the flowering period and during periods of prolonged drought.
Fertilization must be carried out from the vegetative restart onwards by administering well-humified organic substance.
The Alcea rosea can be propagated by seed, autosemine and by division of the tubers (similar to those of the calla lilies).
Sowing is carried out in the seedbed in the April-June period, burying the seeds at a depth of 10 cm.
Reproduction by division of the tubers, instead should be done in autumn.
For the transplantation of young seedlings this should be done when they have emitted three or four leaves; the transplant must be carried out in pots, or in the garden in large pots at a distance of 20-30 cm from each other.
After transplanting, for the first few days, the leaves should be sprayed with water at room temperature.
On the other hand, due to the deep development of the taproot, which makes it almost impossible to make an excavation of such depth as to extract it without causing it to break, the plant suffers a lot from transplanting when it is already in an advanced state of development. For the same reason, pot cultivation is not recommended; it is common practice to sow in open soil, in a place where it is foreseeable that the plant will not have to be moved later.
In winter it is advisable to protect the base of the plants with a straw mulch or dry leaves.

Uses and Traditions –
Common hollyhock is a medicinal plant that is used for phytotherapeutic purposes but is cultivated mainly in informal gardens with a natural appearance; particularly, considered the size of the stems, as the last row of the borders.
The roots contain mucilaginous substances that were used, after treatment, to protect the mucous membranes of the pharynx and against coughing.
The mucilaginous sugars, of which the roots are rich, are mainly composed of glucuronic acid, galacturonic acid, rhamnose and galactose; in contact with moisture they become a soft gel that is used to protect the pharynx from the irritating elements and in the treatment of dry cough.
This plant also has immunomodulating properties: research indicates that it acts as a polyclonal activator of B lymphocytes.
Also the flowers show anti-inflammatory and analgesic properties; the aqueous extract seems to have the ability to stimulate steroid metabolism without changing the characteristics of the steroidogenesis of the studied rats.
Moreover, in the extracts of Alcea rosea, polyphenols have been found with weak antiestrogenic activity due to the blocking of aromatases such as quercetin and kaempferol.
Other isolated acidic phenolic compounds are: ferulic acid, vanilic acid, syringic acid, p-coumaric acid, p-hydroxybenzoic acid, hydroxyphenylacetic acid and caffeic acid.
Due to the presence of these active ingredients among the most important phytotherapic properties of this plant we include:
– Action inhibiting aromatase;
– astringent action;
– Demulcente;
– Diuretic;
– Emollient;
– Expectorant;
– Febbrifuga;
– Fungicide;
– Gastroprotective;
– Hypoglycemic;
– Stomachica;
– Vasoprotective.
Furthermore, some studies indicate that Altea may behave as a possible biological purifier of heavy metals in contaminated soils.

Preparation Mode –
For the use of the active ingredients present in the roots, the collection of these must take place in the autumn period from plants of two years of age: these are cut into sticks of max 20 cm, peeled and dried at 40 ° C. The roots are also sold in the form of dried extracts, syrups and pastilles.

One thought on “Alcea rosea”