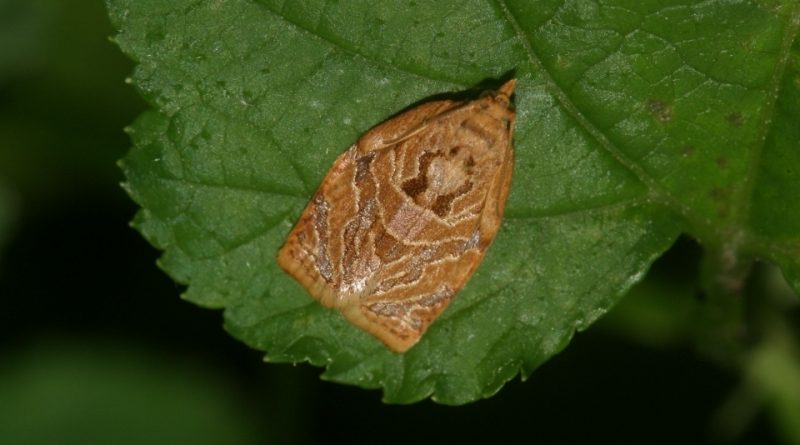 Geographical Distribution and Habitat –
Summer fruit tortrix is a Tortricide widespread in central and northern Europe. In Italy it is present in the northernmost regions, in particular in Trentino-Alto Adige and in Emilia Romagna.
Its habitat is represented by the areas with the presence of pome fruit, but it can also be found on apricot, broad-leaved cherry (such as birch trees), currant and plum. 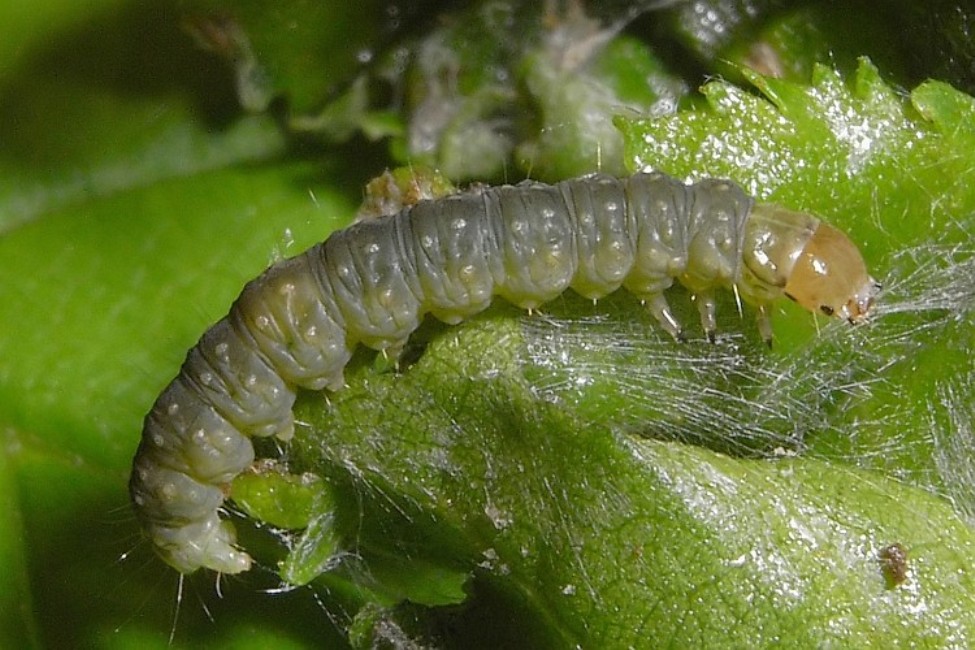 Morphology –
The Adoxophyes reticulana, as an adult, has a wingspan of 18-22 mm and is recognized as it has brownish anterior wings, tending to yellowish or reddish depending on the individuals, crossed transversely by narrow bands: a basal vault with concavity towards the root, a median restricted to the center, from which branches a branch that, from normal, bends at an angle to point towards the inner corner, another subapical parallel to the median and obliquely directed downwards; a thin strip runs along the costal margin of the first proximal third.
In the males the design of the wings is more marked while in the females it is less evident and sometimes confused.
The larvae, at maturity, measure 16-20 mm in length; these have a green, head and pronotum colored body with honey-colored piliferous warts. Furthermore, the larvae, up to 10-12 mm in length, have a blackish pronotal plaque.
The eggs can be recognized as they are yellow-greenish in color, laid in an embryonic manner, inside ovoplacche.

Attitude and biological cycle –
The summer fruit tortrix winters, in the recesses of the rind, at the stage of young larvae sheltered by a small cocoon.
Arrived in the spring period these resume their activity damaging the young buds or the flower bunches present.
The flicker of the adults occurs in the period from the third decade of May to the end of June, with a peak of flicker towards the middle of June.
The day after the flicker the mating are consumed: each female, during its existence, can be fertilized several times.
The females lay on the leaves. The egg-laying is carried out with twilight temperatures between 16 and 32 ° C, but with a high degree of environmental humidity it can also occur with only 10 ° C.
Each fertilized female lays, in total, up to 400 eggs (with an average of 200) in 4-16 ovoplaces, each of which includes 30-80 elements arranged in a simple way. The eggs are placed on the hairless page of the leaves. The embryonic development starts with temperatures above 10 ° C and reaches completion after 8-20 days.
The larvae that are born begin their activity in June and continue until July.
The first stages of development passed from the larvae close to the median nervation, on the underside of the leaves, sheltered in a tubular case of silk; subsequently they crumple the leaf flap, also performing erosions to the detriment of the fruits. Once mature they become incrisalidano inside a cartoccio formed by leaves from which, after around 6-16 days (in function of the environmental conditions), the new adults come out.
In August there are the 2nd flight adults that originate the 2nd generation larvae that will overwinter.
In this way the Adoxophyes reticulana makes two generations a year except in the areas at high altitudes, at the limits of apple vegetation, where it evolves with only one generation.
The damage to the plants is caused by the larvae that feed on the damage to the leaves and buds, of floral buttons, of young fruits and of those already developed.
In concomitance with the vegetative restart, the larvae that pass the winter create erosions on the leaves of the buds, on the floral buttons and flower bunches, wrapping them with silk threads. After setting, erosions can also be found on young fruits. The leaves placed at the apex of the shoots are devoured by the larvae of the summer generation of A. reticulana, after having tied them with silk threads, damaging also the fruits in contact with leaves or other fruits, on which they produce extended rosure.
On the fruits of the short-stemmed apple tree cultivars (for example Gravenstein) erosions occur in the peripeduncular portion, with consequent subsequent falling of the damaged ones.

Ecological Role –
The containment techniques of this moth must follow guided and integrated control criteria; it is advisable to carry out monitoring with the sexual traps that must be placed in orchards in the second decade of May. For the determination of any intervention the thresholds are cumulative with the other embroiderers Tortricidi.
A good help to the systems of fight against these insects are given by the forecasting models to predict the moment of development of the phytophagous. Environmental sampling is performed in spring to evaluate the activity of wintering forms on buds and flower bunches. In prefioritura (for the wintering generation) the threshold is 15-20% (in some cases lowered to 5%) of infested shoots.
After flowering, for subsequent generations, the intervention threshold is determined with 5% of infested buds / bunches; if no action is taken first, the petals may fall with the same products. After these interventions, carried out according to the indications emerging from the samplings, all the other treatments can be performed by evaluating the thresholds using sexual traps.
The natural enemies of the embroiderers, also common in Carpocapsa, are not able to contain phytophagous populations by themselves, under the damage thresholds. However we remember, for their coaduvant action, the Hymenoptera Calcidoidei and Braconidi; among the very important Calcidoidei are the Trichogramma which are active on the eggs. Finally we remember the Diptera Larvevoridi whose larvae parasitize the larvae of the Tortricidi.
A good help to the decrease of these Tortricidi can be made from the decrease of the specialization of the cultivation of the orchards with agroecology systems that tend to diversify the cultivation regulations introducing differentiated biocoenoses.