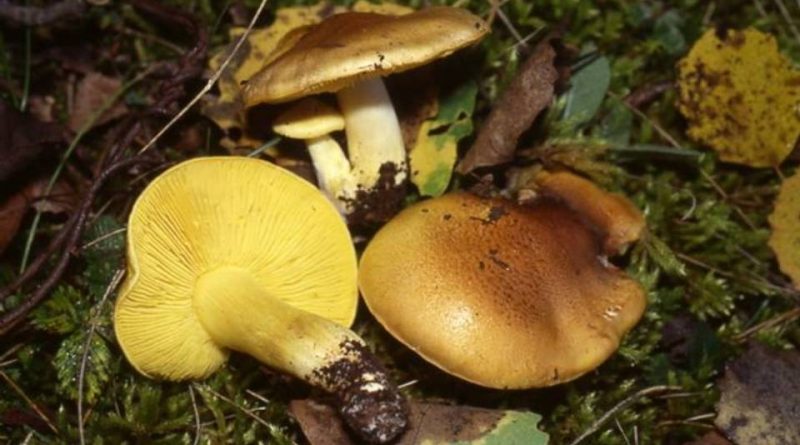 The man on horseback or yellow knight (Tricholoma equestre (L.) P. Kumm 1871) is a fungus belonging to the Tricholomataceae family.

Systematics –
From the systematic point of view it belongs to the Eukaryota Domain, Fungi Kingdom, Basidiomycota Division, Basidiomycetes Class, Agaricales Order, Tricholomataceae Family and therefore to the Tricholoma Genus and to the T. equestrian Species.
The terms: Tricholoma flavovirens S. Lundell and Tricholoma auratum (Paulet) Gillet are synonyms and obsolete binomials.

Etymology –
The term Tricholoma comes from the Greek ϑρίξ, τριχóϛ thríx, trichόs hair, hair, braid and from λῶμα loma edge: with down along the hem. The specific equestrian epithet refers to knights, nobles.

Geographical Distribution and Habitat –
The man on horseback is a fungus that is found frequently in loose, sandy soils, where it grows mainly under coniferous and deciduous trees. The fruiting period is in autumn. 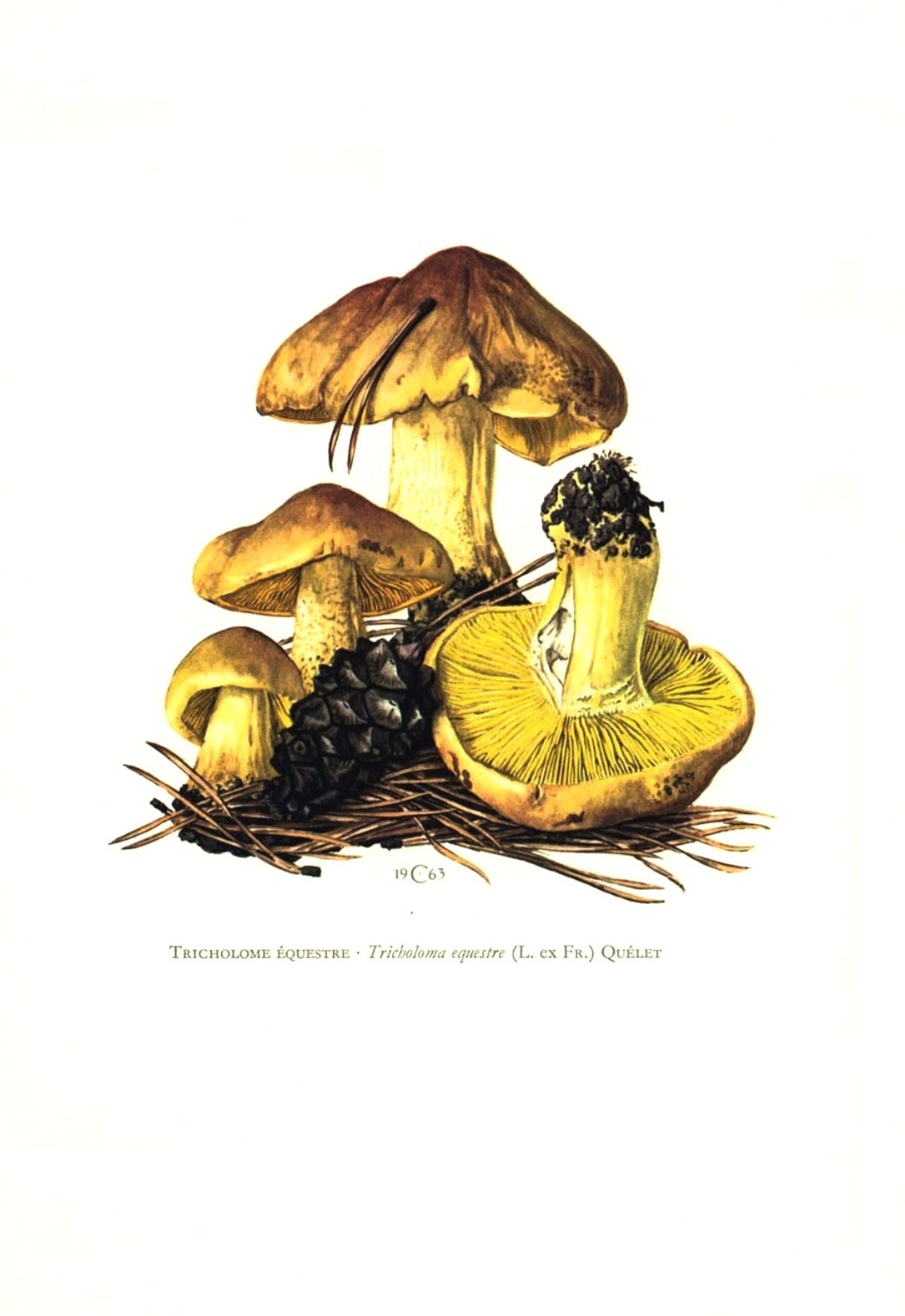 Recognition –
The man on horseback is recognized for having a fleshy, bell-shaped, flattened-wavy hat, of an oscillating color between olive yellow, greenish-yellow or brown-yellow, with a viscous consistency, covered with reddish scales, separable and with a diameter of 8 – 12 cm and with easily detachable cuticle.
The gills are dense, free, of a sulphine yellow color, sharp towards the edge of the hat, wavy edge.
The stem has a massive, stocky, full and cylindrical shape, sometimes bulbous at the base, yellow or citrine yellow, 4 – 7 cm high and 6 – 12 mm wide.
The flesh is straw yellow in color, citrine under the cuticle, with a barely perceptible powdery smell (rubbing or dissecting the carpophore) and with a pleasant taste of flour.
Under the microscope, white, elliptic spores of 6-8 x 4-5 µm are identified.

Cultivation –
The man on horseback or yellow knight is a non-cultivated mushroom, especially due to the recent poisoning syndromes found especially in France.

Uses and Traditions –
The man on horseback is also known by the names of equestrian Agaricus, Knight’s mushroom and Yellow Wheatear.
The man on horseback was considered until August 2002 an edible mushroom, with an exquisite taste because it was much appreciated and sought after since ancient times. Recently the news coming from France and Poland, about some poisonings caused by this species, some of them even with fatal outcome, induce however to categorically discourage its consumption.
For this reason the collection is not recommended because of its almost certain accumulation poison. This fungus would cause rhabdomyolysis, even with a fatal outcome. The fungi under indictment were collected in a pine forest along the south-western coast of France, in the period from autumn until late spring. None of the patients had ever had muscle injury or muscle ischemia before.
However, it is not well understood which substance is responsible for said poisoning by accumulation, even if it is suspected that it may be a mycelium (a mold) that would grow on carpophores of this species but only in some regions of France.
The suspicion that the French poisoning cases can be linked to a mold (and therefore attributable to a mycotoxin), could be supported by the fact that in Italy many people regularly consume T. equestrian and cases of poisoning have never been documented (almost to mean that the parasite mycelium is not present on the peninsula).
According to some authors it would seem that the serious poisonings are to be attributed to another morphologically similar species, namely Tricholoma auratum, even if there are no confirmations to support this hypothesis.
Because of these facts the man on horseback is no longer included among the fungal species for which the sale is allowed, in Italy; this provision was adopted as a precaution, in response to the worrying cases that occurred in France.
The judgment of edibility on this fungus, considered for a long time to have been excellent, has therefore been completely overturned by the occurrence of various episodes of intoxication that suggest, even to those who believe they are “experts”, in the recognition of mushrooms, to use caution in the collection and consumption of the same.
Among the similar species with which this fungus can be confused we remember:
– Tricholoma sulphureum (Bull.) P. Kumm 1871; a poisonous species, small and thin, it differs for the color of the lamellae that are of an attenuated yellow, less intense; for the color of the flesh that appears yellow also in the inner part and for the strong odor of sulfur that emanates.
– Cortinarius splendens Rob. Henry 1939; poisonous species, cause of numerous even deadly poisonings, it differs from T. equestre for the smoother and more viscous cap, for the presence of curtain or remains of curtain on the stem, of marginal bulb at the base of the stem and for the color of the lamellae from yellow they become rust-colored due to spore maturation.
– Tricholoma auratum Gillet, from which it distinguishes itself because it has the flesh always yellow instead of white with yellow shades and that is of suspicious edibility.

Preparation Mode –
The man on horseback, considered for a long time an edible mushroom, due to recent reports of poisoning must be considered, until proven otherwise, a non-edible fungus for which collection and consumption is not strongly recommended.