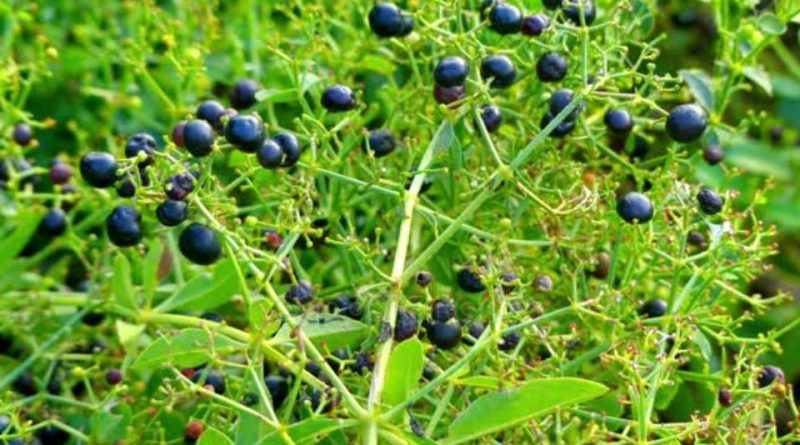 The rose madder or common madder (Rubia tinctorum L.) is a perennial herbaceous species of the Rubiaceae family.

Systematics –
From the systematic point of view it belongs to the Eukaryota Domain, United Plantae, Magnoliophyta Division, Magnoliopsida Class, Gentianales Order, Rubiaceae Family and therefore to the Genus Rubia and to the R. tinctorum Species.

Etymology –
The term Rubia comes from red rúbeus, as the root was used to dye red. The specific epithet tinctorum is the plural genitive of tinctor dyer: dyers, who used these plants to dye fabrics.

Geographical Distribution and Habitat –
The rose madder is a species of Asian origin, from an area that goes from the Middle East and Turkey to Central Asia, once cultivated also in Italy for the dyeing of fabrics, today rarely present in the sub-spontaneous state in all regions of the Continental Italy except in Liguria, but in strong decline and in many regions no longer observed for a long time. 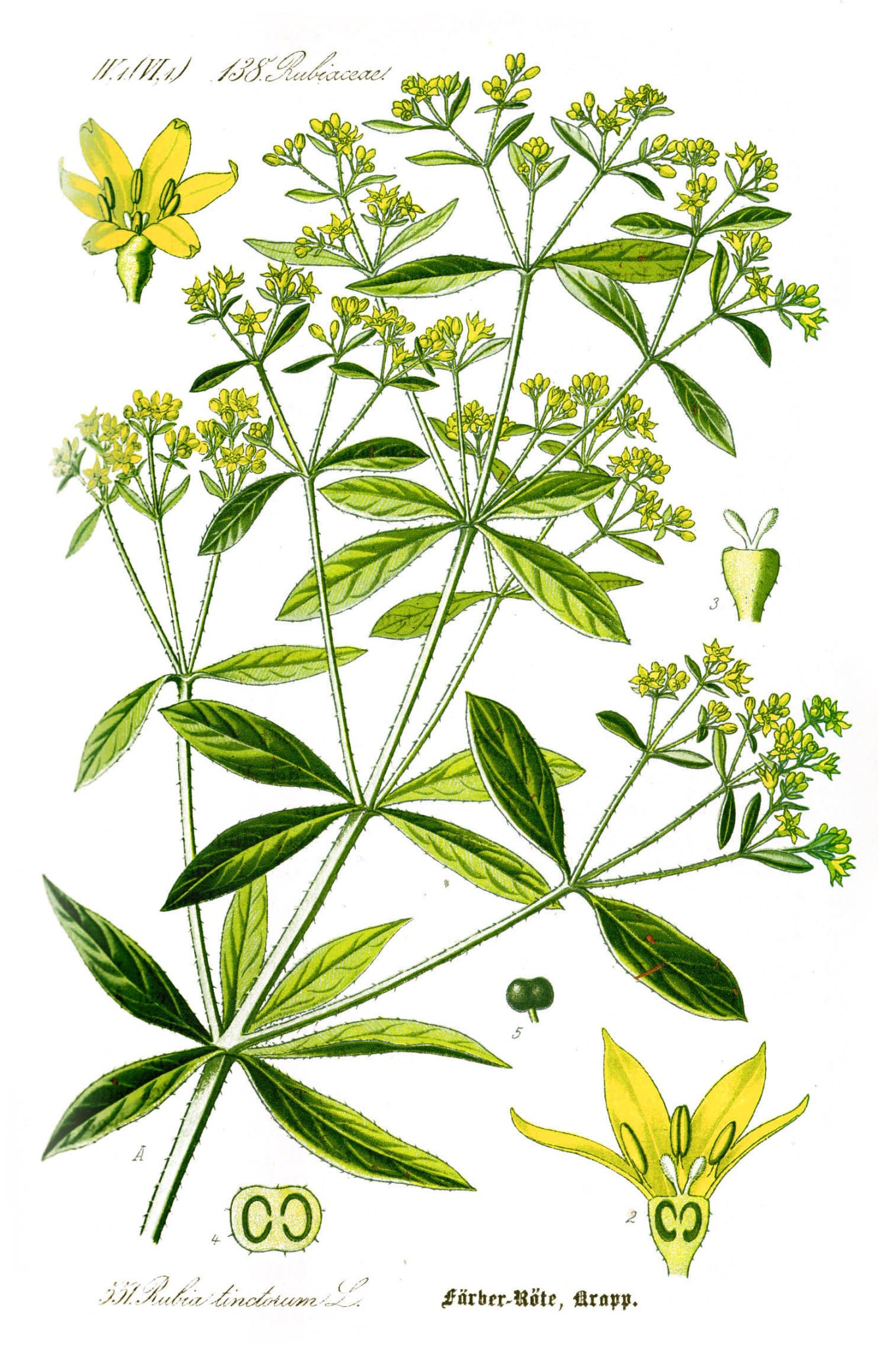 Description –
The Rubia tinctorum is a herbaceous, perennial plant that has very branched, quadrangular, long, rough, and harsh stems; the branches have a tendency to climb and are covered by spines facing downwards, and narrow leaves, arranged in a spiral around the stem grouped in groups of 4 or 6, also covered by small spines both on the ribs of the lower and long page the margin.
The roots are thin, long and are reddish, branched, with a strong smell.
The flowers are small, star-shaped and yellow-greenish in color.
The fruits are red berry which becomes shiny black when ripe.
The anthesis is between April and June.

Cultivation –
For the cultivation of Rubia tinctorum it is taken into account that this plant prefers deep soils with sowing that must be carried out away from frost at a depth of 4-6 cm.
Sowing must therefore take place in spring, or the plant can be transplanted by cuttings in the autumn.
Seed germination usually takes 15-20 days.
The harvest is carried out during the third year of age of the plant. The alizarin dye settles over time from the stem to the roots, fixing itself. The rhizomes are then extracted from the earth, washed, dried and ground to obtain a thin, practically unassailable dye powder that can last for several years.

Uses and Traditions –
Rose madder is a plant known since ancient times and was mentioned by Vitruvius, Pliny and Heraclius. The madder name of the dyers is due to the fact that from its roots the dyers derive the color called “red of garanza” or “red adrianopoli”.
This plant has therefore constituted since ancient times the main source of red coloring for textile fibers, skins and wall paintings. Cited in the works of Hippocrates, Theophrastus and Dioscorides, which mentions its cultivation in Tuscany, it was used by the ancient Egyptians for dyeing linen.
Madder is perhaps the most important dyeing plant: it was cultivated since ancient times to produce a particular dye (alizarin), but in Italy, since it is almost no longer tinged with vegetables, it is now unknown. However, you can see large baskets of madder roots in the Persian or Moroccan markets, where it is still used for craft work. The fruits of the plant are preserved, to have the seeds, and the roots, to dye. The rest is discarded. The roots of madder are harvested from the eighteenth to the thirtieth month of vegetation, they are dried and reduced to small pieces.
From the Middle Ages onwards, until the corresponding synthetic pigment was produced, the pigmenting substances produced by the plant constituted the reason for vast cultivations and rich commerce.
Beginning in the seventeenth century, its roots began to be imported into Europe from Syria, Persia, Asia Minor and Greece, from Syria, by the Dutch, themselves great producers along with France, where it was introduced in the days of Louis XV and later intensively cultivated in some southern regions, including Provence.
In Italy the cultivation of madder was maintained until the end of the nineteenth century, characterizing with the red brick color that, together with the blue of the ford, the coloring of the local popular fabric is obtained, especially in traditional regional clothes.
The rapid decline of madder occurred with the identification of its coloring principle, which is an anthracene compound, called alizarin, synthesized in 1868 by German chemists Groebe and Liebermann.
From the root, which contains several polyphenolic compounds (anthraquinones), a red dye was used since ancient times, used both in wall painting and in fabric dyeing. The color obtained from its roots, a concentrated and brilliant red, even if sensitive to light and water like all organic dyes, is among the most stable (it tends to remain intact even after prolonged washing) and economic (respect, for example, to animal purple).
The Robia tinctorum is used, however, also for the preparation of herbal preparations, as well as as a dyeing plant.
In herbal medicine the diuretic and anti-inflammatory therapeutic properties are appreciated and it is used to treat sciatica and certain forms of paralysis. It is useful as an adjuvant in cases of cystitis, rheumatism and constipation. In herbal medicine it is also used for the preparation of natural hair dyes.
According to what reported in the ancient texts “It makes the dense urine copiously urinate and sometimes the blood. But it is necessary for those who drink the decoction to wash every day in the bathroom and observe the appearance of the faeces and their difference each time. The juice of the root and leaves, is useful for snake bites, taken with Vino. The seed, drunk with Aceto Melato or Oxymele, decreases the spleen [the enlarged and hard spleen is a sign of serious pathology for the Hippocratic-Galenic Humoral Doctrine].
In addition, the root applied to the female genitals, promotes menstruation, childbirth and expulsion of the placenta. Applied [on the skin] with vinegar, it heals white vitiligines ”. This was what Dioscorides said.
Galen (2nd century AD, an imperial court physician from Marcus Aurelius to Septimius Severus) described it, much more concisely, but not less accurately, in the VI Book of the “Virtue of simple medicaments”:
He asserted that: “it is the Robbia root with an unripe and bitter taste. And therefore it performs all those actions related to these flavors: therefore it cleanses the liver and the spleen, and abundantly expels the dense and sometimes even bloody urine. It causes menstruation and “asterge” [“cleans by drying”] where needed. Externally applied, it turns off white vitiliges. Some give it to drink with Acqua Melata in sciatica and paralysis “.
In the Tuscan folk tradition, the Robbia decoction was used to expel blood clots from the genito-urinary system. As can be seen, it corresponds to what even the ancients had observed.
Therefore, from the herbalist-phytotherapic point of view, according to the humoral doctrine of the cultured (but also popular) Mediterranean area, the Robbia is a highly potent, diuretic, “purifying” device, avoids the formation of kidney stones and acts on the female genital organs , but also on the joints (the so-called “paralysis”, apart from the sciatica, are articular syndromes, rather than neurological). It is not easy to find, also because, now, it has been replaced in everyday herbal practice by equally effective plants.
In the technique for the preparation of the red color, in ancient times, sometimes bovine blood or Sumac (Rhus Coriaria L.) was added, a powerful tannin-based tanning agent. To make the color bright red, it is boiled several times in a boiler under light pressure (we are already in an absolutely industrial setting), together with soap and tin salt (said tin should be chloride).
For the dyeing of wool, a mordant based on alum and cream of tartar (extracted from the tartar of barrels, potassium acid tartrate, which precipitates from the Wine during aging or aging) is put on. Finally, a little salt is added.
The colors made with the Robbia or with the garanza are of great solidity.
But the authors of 1905 already say that the use is almost abandoned.

Preparation Mode –
Below is the procedure suitable for dyeing in red, with Rubia tinctorum root, madder on wool or cotton.
Pre-treat the wool by simmering it for an hour in water in which potassium alum has been dissolved (available in pharmacies). The amount of alum (used at 25%) is to be calculated on the weight of the material to be dyed; for example, 100 grams of wool requires 25 grams of alum. Allow the material to cool in the bathroom.
If you want to dye the cotton instead, you need to calculate 20% of potassium alum and 5% of Solvay soda (available in supermarket detergents) on the weight of the dry material and proceed as above.
Obtain cultivated or wild madder root (harvested and dried or purchased in herbal medicine, possibly powdered) and proceed with dyeing by immersing the material in water to which the madder has been added. Bring the dyeing bath to 85 ° and keep the temperature for an hour, stirring often to obtain a uniform dye.
Then let it cool in the bath, wash in water and neutral soap, rinse, centrifuge and dry in the shade.
N.B. If you use the root in small pieces, you must first extract the color by soaking it in water for a few hours and then at 85 ° an hour, then let it cool and filter.