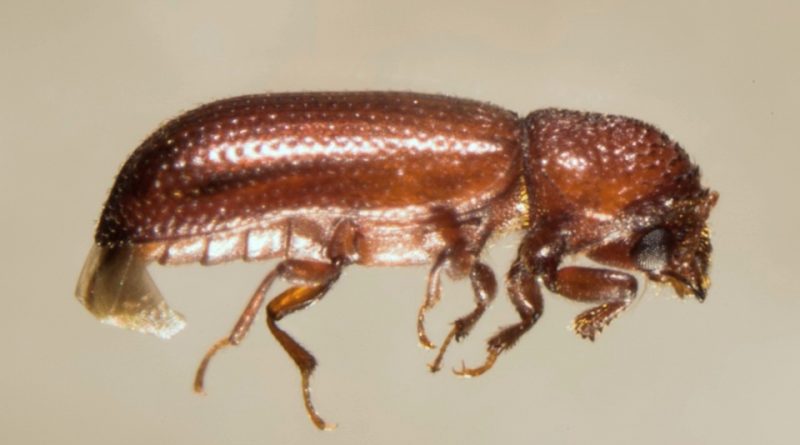 The lesser grain borer (Rhizopertha dominica L.) is a beetle belonging to the Bostrichidae family.

Geographical Distribution and Habitat –
The lesser grain borer is a beetle originating from tropical and subtropical countries that was introduced, in Italy, in 1938 and is today a cosmopolitan species, where adults, very long-lived, outnumber larvae, making them the main culprits for the galleries dug in the attached products that are piled up in the warehouses of cereals (wheat, corn, oats, barley, rice, etc.), as well as in flours, pasta, biscuits where it is considered as one of the main scourges.

Morphology –
The adults of Rhizopertha dominica are small beetles about 2-3 mm in length, which have a reddish-brown color, with antennae and legs tending to yellow. The head is hidden by the wide, convex and wrinkled pronotum.
The name lesser grain borer is due to the form of the pronotum that can remind the cap of a friar.
The elytrons show well-defined lines of point depressions.
The larvae are about 2.5-3 mm long and are oligopod; they are whitish in color and convex in shape; the head is brownish in color.

Attitude and biological cycle –
The females of Rhizopertha dominica can lay, over a few weeks, up to 500 eggs that are placed outside the caryopsis. The newly leaved larvae begin to dig into the caryopses where they penetrate, feeding on the starch of the seed until maturity, when they pupate; in the same seed there may also be more larvae.
The development cycle, in conditions of high temperatures, can be accomplished even in about a month; in moderate temperature conditions, the cycle is completed in 2 or 3 months.
In Italy there are normally three generations.
The lesser grain borer feeds in depth, up to 12 meters from the surface, in the piles of foodstuffs.

Ecological Role –
The damage of this insect is determined both by the larvae and by the adults that attack the cereal kernels, emptying them, their derivatives and flour. In addition, adults are very long-lived and can also attack woody structures that may be present in warehouses (including the holds of ships), causing serious damage as well as obtaining niches in which to protect themselves.
For the containment of this insect, prevention and control techniques must be implemented which must follow certain rules.
It is important, first of all, that the storage rooms must be perfectly impenetrable to insects; even doors and windows must have arrangements that allow them to be hermetically sealed; in particular, the windows must be equipped with fine-meshed metal or nylon nets to prevent the entry of adult insects.
Identical precautions must be taken for the foundations of the buildings that must be isolated and sealed to allow for possible disinfestation fumigations, even under pressure
Additional measures may provide for effective application in warehouses and processing rooms:
– food traps;
– electric discharge light traps;
– sexual traps: these are particularly effective against Lepidoptera.
The traps are also important both:
– for massive capture, in order to reduce the numerical consistency of the population, by capturing the males who can no longer perform mating;
– for monitoring capture: in this way the entity of the population is identified and the development cycle is followed in order to determine the intervention threshold. This allows the identification of the most propitious moment to intervene with pesticides and only when the size of the population is such as to cause real economic damage.
The intervention threshold varies from 1 to 2 insects per trap and the disinfestation is carried out with fumigants or with residual insecticides; it can be done both with current infestations and with empty rooms, for preventive purposes.
The use of the fumigation technique must be carried out by specialized personnel, with prior authorization from the Police Headquarters, the A.S.L., or the Harbor Master’s Office.
Regarding the doses and the periods of exposure must be strictly observed to avoid that the stored product takes odors which are then also transmitted to bread and other derivatives.
However, these techniques are well understood. In the context of limiting residues in foods, they should be changed in favor of others that avoid the residual effect.
Currently, in fact, we are moving towards the conservation of foodstuffs through the use of two new technologies: controlled atmosphere and refrigeration; these new techniques that tend to replace chemical products allow to limit the infestations and to obtain preserved products without chemical residues.
These techniques provide specially constructed and naturally watertight environments.