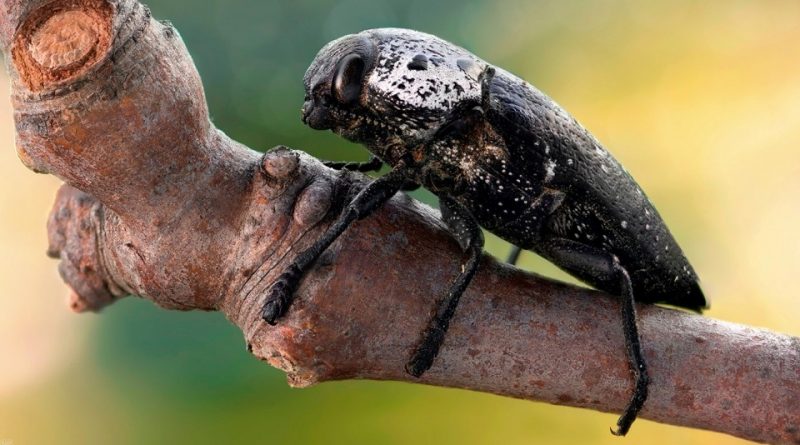 Geographical Distribution and Habitat –
Jewel beetle is a polyphagous beetle that lives at the expense of cultivated stone fruits (apricot, plum, peach and cherry) and is widespread throughout the Mediterranean area (Spain, France, Greece, Tunisia, Algeria, Morocco, Lebanon, Israel), Iran and near East. It is present in Italy, especially in the southern regions, although due to climate change its distribution area is also expanding to the north.

Morphology –
The adults of Capnodis tenebrionis are 15-28 mm long and have an opaque black color with the back of the first part of the thorax (area behind the head) light in color with four bright point protuberances.
The larvae are apode, of a yellowish white color, with an elongated and flattened shape with evident segmentation of the body; these at maturity reach 60-70 mm in length.

Attitude and biological cycle –
The adults of Jewel beetle overcome the winter in different shelters present in the ground and then appear in the period of May-June. These feed on the foliage and move with flights from one plant to another during the hottest hours. The females lay their eggs in isolation or in small groups in the crevices of the trunk up to a height of 10 cm from the ground or in the soil surrounding the plant; the deposition period is from June to September.
The eggs are very susceptible to relative humidity with an ideal level around 65%, after this level mortality begins to appear between them, until it is total with 100% humidity.
The larvae are born after a period of about 2 weeks from the ovo deposition and those born from eggs laid in the ground move in search of the stem or roots. The larvae penetrate through the cortex and dig sub-cortical tunnels, they will develop inside them in 1-2 years after having passed two winters. The mature larvae dig a cell where, after two weeks, they become pupated and after three weeks there is the formation of the adult; this escapes and is nourished for a short period to then, with the arrival of autumn, go to take refuge to overcome the winter.
Capnodio takes 1-2 years to complete its biological cycle (adults reappear in the 2nd or 3rd solar year); the mature larvae can be easily identified because at the end of the cycle they are carried and pupated in superficial subcortical niches.

Ecological Role –
Jewel beetle is nourished at the expense of wild and cultivated rosaceae. The symptoms of its presence on the apricot tree can be the production of gums, the fall and the desiccation of the leaves.
However, it is the larval stages that produce the main damage of Capnodio. The larvae in fact first excavate shallow subcortical galleries, then penetrate the wood where they dig tunnels even in the deepest layers; these tunnels can also have a vertical course due to the movement of the larvae from the trunk to the roots and vice versa.
The most affected woody organs are the stems, especially in the basal parts, and the large roots; the affected plants perish severely and, especially the younger ones, up to 3-4 years that can die.
The almond is the least susceptible among the different stone fruits and the infestations occur generally in the southern and insular regions, sometimes they occur also in the northern regions especially in the hilly areas.
The containment of the population of Capnodis tenebrionis is based on agronomic interventions starting from the purchase of healthy material and the maintenance of plants in good health, as a good vigor makes them less susceptible.
If capnodium is present it is possible to carry out abundant and frequent irrigations to kill the larvae, unearth the collar of young plants that show deterioration of the foliage and surround it with a thick mesh to prevent the adults from escaping, eliminating and burning the plants with symptoms of general suffering.
Other containment techniques of this beetle can be those with white oils activated with insecticides to be carried out during the oviposition, thoroughly washing the basal parts of the plants with the insecticide suspension to prevent their larval activity.
The adults could be controlled with chemical interventions to the vegetation during their period of trophic activity on the epigeal parts.
It is clear, however, that this last hypothesis must be commensurate with the ecological costs and the suitable periods to avoid interference with the pollinator populations.
Lately, however, work is underway mainly on agronomic interventions to be combined with direct defense, aimed at hampering the development and spread of Jewel beetle and one of the most interesting possibilities that are emerging concerns the choice of the rootstock for the new plants. Clearly this is a technique that has very interesting perspectives but which, to be applied correctly, requires the involvement and collaboration of the nursery owners.