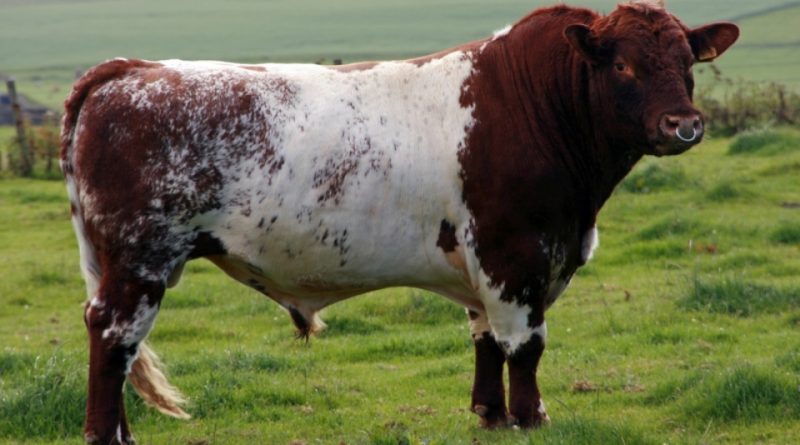 Beef Shorthorn is a cattle breed (Bos taurus Linnaeus, 1758) originally from the county of Durham in Scotland with an aptitude for meat production.

Geographical and area distribution –
Beef Shorthorn is a breed bred on most of the globe and today, although bred mainly in Great Britain, is also widespread in the USA and in many other countries. This breed is widespread mainly in English-speaking countries and in southern South America. The main countries where it is bred are: Argentina, Australia, Canada, New Zealand, Republic of Ireland, South Africa, United Kingdom, United States of America, Uruguay and Zimbabwe.

Origins and History –
The Shorthorn breed was born in the County of Durham in Scotland and today includes several entities that are real breeds: Scotch Beff Shorthorn, Milking Shorthorn, Northern Dairy Shorthorn, Lincoln Red Shorthorn and Polled Shorthorn.
This breed originated from Teeswater and Durham cattle which was originally present in the north east of England. In 1783, the Colling brothers, Charles and Robert, began to improve Durham cattle using the selective breeding techniques that Robert Bakewell had successfully used on Longhorn cattle. In 1796, Charles Colling of Ketton Hall, raised the famous Durham Ox.
At the same time, Thomas Bates of Kirklevington and John Booth of Killesby were developing the Teeswater cattle. The cattle bred by Bates were subsequently selected for their milking qualities, while the cattle bred by Booth for their quality of meat production. The animals brought to Scotland in 1817, from the breeding of Booth, were used to produce the Beef Shorthorn breed.
The Genealogical Book of this breed was established in 1822 by George Coates and represents the first genealogical breed book of cattle in the world.
At first the breed was developed for dual purpose, therefore suitable for both milk and meat production; however, some bloodlines within the breed have always accentuated one quality or another. Later, over time, these different lines diverged and, in the second half of the twentieth century, two separate breeds developed: the Shorthorn beef breed and the milk Shorthorn.
In any case, all Shorthorn cattle are red, white or roan. A white Shorthorn line was also selected: the white Shorthorn was selected to breed with the black Galloway breed cattle to produce a popular cross: the Blue Gray.
The Shorthorn cattle was one of the first breeds to be imported into Australia when several animals were introduced to New South Wales in 1800. Other breed Shorthorns were imported to New South Wales in 1825 by Potter McQueen of Scone.
The breed has a broad genetic basis, leading to the development of several distinct but closely related strains.

Morphology –
The Beef Shorthorn is recognized for having a coat variable from red, white and ubero (red and white hairs).
The muzzle is depigmented and pink in color; the horns are short, with an elliptical section and turned sideways and downwards.
They are bovines with excellent conformation for the production of meat (good development of the muscular masses and thin skeleton), with reduced but massive structure.
The live weight of the females is 700 -900 kg, while the males reach 1200 -1300 kg; the height at the withers of the females is 130-135 cm and of the males of 135 cm.

Production aptitude –
Beef Shorthorn is an early and fast-growing breed. Grazing animals can reach more than 400 kg in a year.
It is a breed with a high yield at slaughter and generally there is an excessive presence of subcutaneous, perivisceral and intramuscular fat.
It is a breed very suitable for grazing and after calving cows breastfeed calves but sometimes milk production is low.
In South America this breed is crossed with Chianina to have taller animals and with less fatty meats. It is also crossed with Zebus to obtain greater resistance in very hot and difficult environments, and with Aberdeen Angus to obtain better quality meats.
A breed derived from the Shorthorn is the Santa Gerturdis, bred in the USA (recognized in 1940) and obtained by crossing Beef Shorthorn with Zebu.
It has been discovered that some Shorthorns have a genetic defect called tibial hemimelia (TH), a disease caused by a gene that causes serious deformities in newborn calves, which are born with twisted hind legs with missing tibias (shin bones) and fused joints, large Abdominal hernias and often skull deformity. These cattle are eliminated. It is a recessive gene.