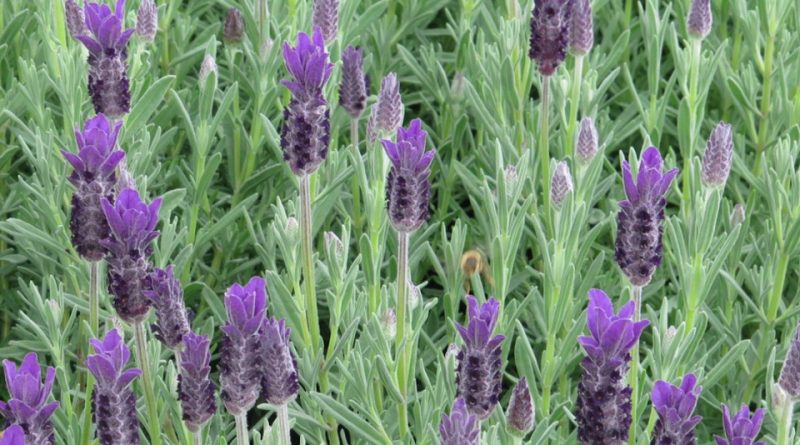 Systematics –
From the systematic point of view it belongs to the Eukaryota Domain, United Plantae, Magnoliophyta Division, Magnoliopsida Class, Lamiales Order, Lamiaceae Family and therefore to the Genus Lavandula and to the L. stoechas Species.

Etymology –
The term Lavandula is the diminutive of lavender, coming from lavo, wash.
The specific epithet stoechas comes from the Greek στοιχώδες stòichódes in a row, aligned, referring to the islands of Hyeres (of which the largest is Porquerolles) formerly known as Στοιχάδες νῆσοι Stoichádes nesoi, Stecadi Islands, an allusion to their alignment seen from the routes traveled by sailors; these taxa are present almost exclusively in the western Mediterranean basin.

Geographical Distribution and Habitat –
French lavander is a plant of Mediterranean origin but not present in all regions of the basin. It is present in all the coastal regions of the Mediterranean with the exception of Libya, Egypt and the Adriatic side of the Italian Peninsula.
In Italy it is present in Liguria and in all the Tyrrhenian regions.
This species is heliophilous, thermophilic and xerophilous and its habitat is that of the phytoclimatic zone of the Lauretum, where it can generally be found from sea level up to 600 meters of altitude and sporadically up to 1000 meters. It grows above all on acid soils and therefore more on siliceous matrix soils with coarse texture, less frequently on calcareous ones. 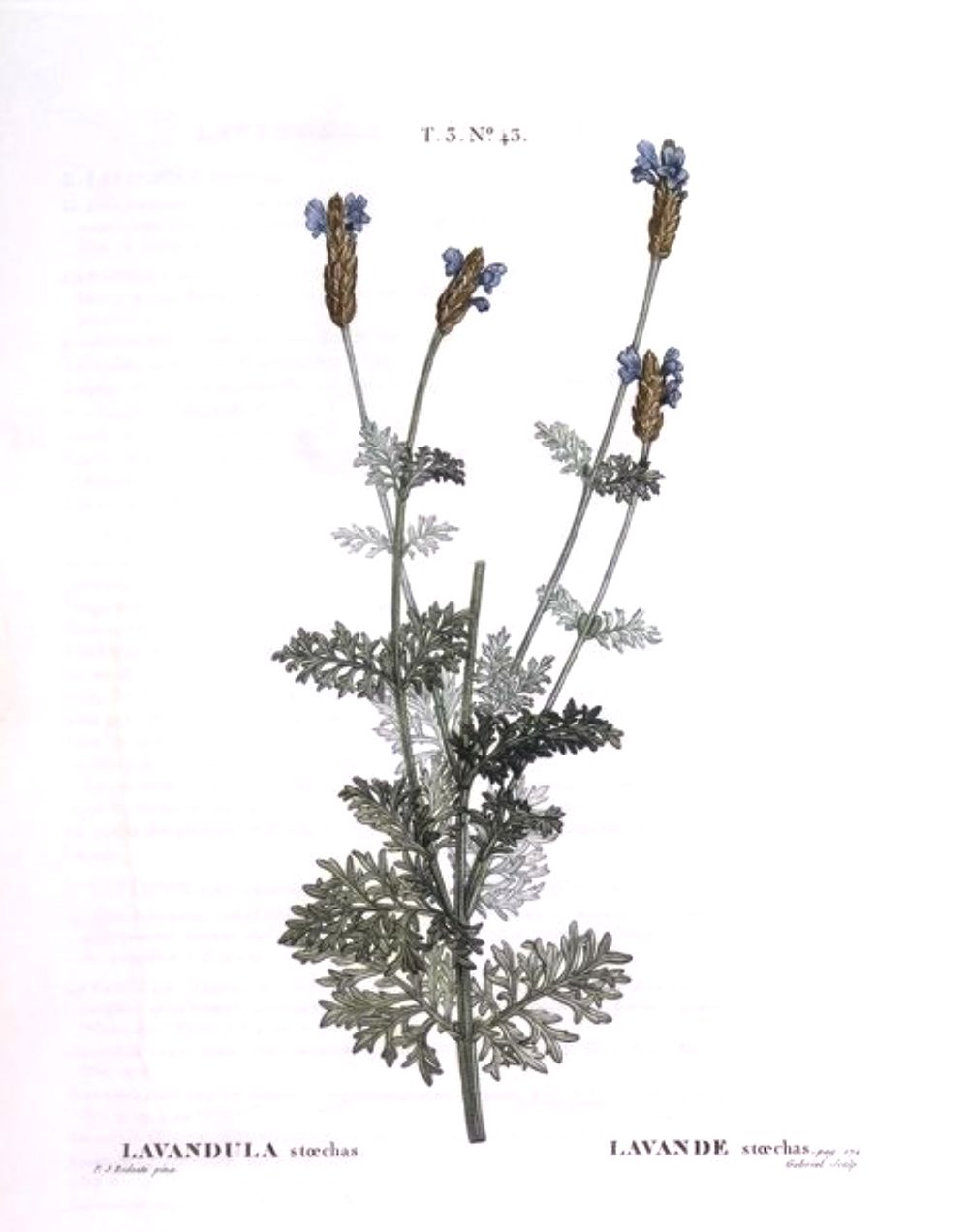 Description –
The Lavandula stoechas is an evergreen suffruticosa aromatic plant that grows between 40 and 60 cm up to a maximum of 120 cm; it has a greyish color due to dense tomentosity, with a dense but densely leafy branching and erect posture.
It has branches that are tomentosi and tetragoni when young.
It has persistent, opposite, linear or linear-lanceolate leaves, 1-3 cm long and a few millimeters wide, with a folded margin and pronounced main vein, white-tomentose on both pages; in addition, smaller leaf tufts are inserted into the leaf axil.
The flowers form a showy and compact spike inflorescence, ovate-cylindrical, slightly angular, 2-3 cm long and surmounted by a group of 2-3 well-developed bracts, purple, blue or purple.
The flowers consist of a tomentose calyx, about half a millimeter with a blue-violet corolla, about half a centimeter long, gamopetal, slightly bilabiated but apparently regular, with a tube ending in 5 almost equal and rounded lobes.
The flowers have 4 sessile stamens.
The schizocarpic fruit is a microbasario (tetranucula) with 4 mericarps (nucule) of 1.6-1.8 x 1.1-1.3 mm, ellipsoids, subtrigons, sometimes compressed, with a convex face, smooth, shiny, sometimes papillose at the apex, brown in color.

Cultivation –
For the cultivation of this species it must be taken into account that the Lavandula stoechas is typically acidophilous and grows, as mentioned, on siliceous matrix soils with a coarse texture and less frequently on the calcareous ones. It is a semirustic plant rich in fragrant floral spikes, easy to grow, suitable for coastal gardens due to its high resistance to salt.
In warmer areas the plant enters vegetation at the end of autumn or in full winter, in the colder ones in spring. The flowering period begins, according to the vegetative growth, from January to May and lasts for some months.
For the exposition it is advisable to choose sunny and sheltered from the wind.
If the plant is grown in pots it should be watered when the soil is completely dry; those reared in full ground are generally satisfied with rainwater and should be irrigated only during periods of prolonged drought.
As far as fertilization is concerned, to stimulate flowering it is necessary to administer a balanced fertilizer from the beginning of the vegetative growth (early spring). To prevent yellowing of the leaves, however, it is good to administer iron once or twice a year. Also in winter it is advisable to protect the plant from frost with a light basal mulch of straw or dry leaves.
It is also important, to reinvigorate the plant, to shorten the stems up to the semi-woody part by using well sharpened and disinfected shears.
Wild lavender can also be subject to the same infestations as common lavender: aphids and scale insects that form clusters on the stems and under the leaves.
The plant is covered by bees.

Uses and Traditions –
French lavander, also known as Stecade, Steca or Stigadosso, although potentially useful, has been of little interest from an agricultural point of view to date. The areas of interest are gardening, beekeeping and herbal medicine. The essential oil can be used in perfumery, but the interest is marginal.
This species, due to its pedoclimatic needs, shuns the dense Mediterranean scrub, while it is frequent in clearings, in degraded spots, often in association with cysts. It is a typical component of Oleo-ceratonion, of the garigue, of the bushy pastures. It is also frequent in the transition facies between Mediterranean riparian vegetation and maquis. In arid and sunny areas it can form extensive coverings with a striking color due to the abundant flowering.
In gardening, wild lavender can be used for the construction of Mediterranean gardens in mixed compositions to which it can give a certain spectacularity due to the abundant flowering and intensity of the colors of its inflorescences.
French lavander plays an important role in the beekeeping sector as it is an interesting honey plant. The monoflora honey obtained from this plant differs markedly from lavender honey (Lavandula angustifolia) properly so called: it has a finer taste and is not very aromatic. Lavender honey produced in Italy is actually obtained from Lavandula stoechas due to the scarce spread of officinal lavender crops. In any case the monoflora honey is little present on the market and is produced above all in Sardinia and on the island of Elba.
An essential oil is extracted from french lavander which contains linalol, linalyl acetate and cineol. Like other lamiaceae, it has antiseptic, mildly expectorant and antispasmodic properties.
In cosmetics, on the other hand, the essential oil obtained from it is an excellent rebalancing agent (anxiety, insomnia), analgesic (headache, menstrual pain), antiseptic (pimples), sanitizing (oral cavity, private parts), balsamic (diseases from cooling) and healing (wounds, burns).
Furthermore, this plant has a high tolerance to fires, so it soon returns to flourish in areas devastated by fire.

Preparation Mode –
Lavandula stoechas is a plant that can be used, through the extraction of its essential oil for various therapeutic properties, besides from its flowers it is possible to obtain a monoflora honey with a fine and little aromatic taste.