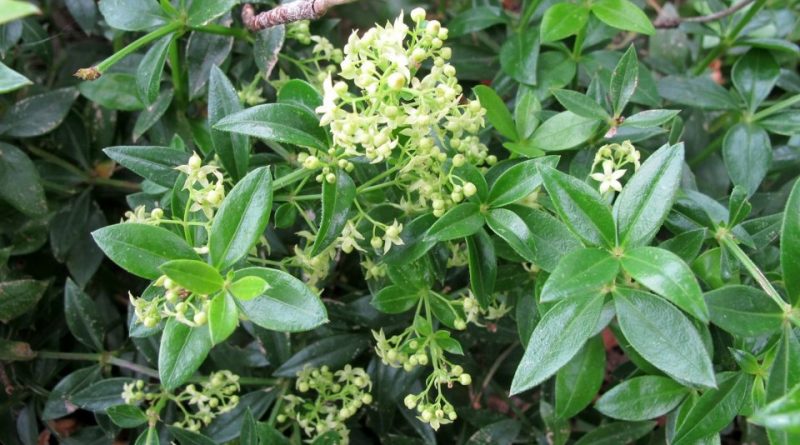 The wild madder (Rubia peregrina L.) is a herbaceous lianosa belonging to the Rubiaceae family.

Etymology –
The term Rubia comes from red rúbeus: because of the root that was used to dye red.
The specific epithet peregrine as exotic, foreign or even in the sense of wandering, wandering, found here and there, without a preferential location.

Geographical Distribution and Habitat –
The wild madder is a plant resistant to stress, typical of the Mediterranean scrub that grows in small woods, bushes, hedges, stony soils and along roads and paths, where it can live between 0 and 1000 meters above sea level.
This plant is mainly present in Mediterranean Europe (Spain, Portugal, France, Italy, Greece and ex Yugoslavia) but it also grows in Great Britain and North Africa. 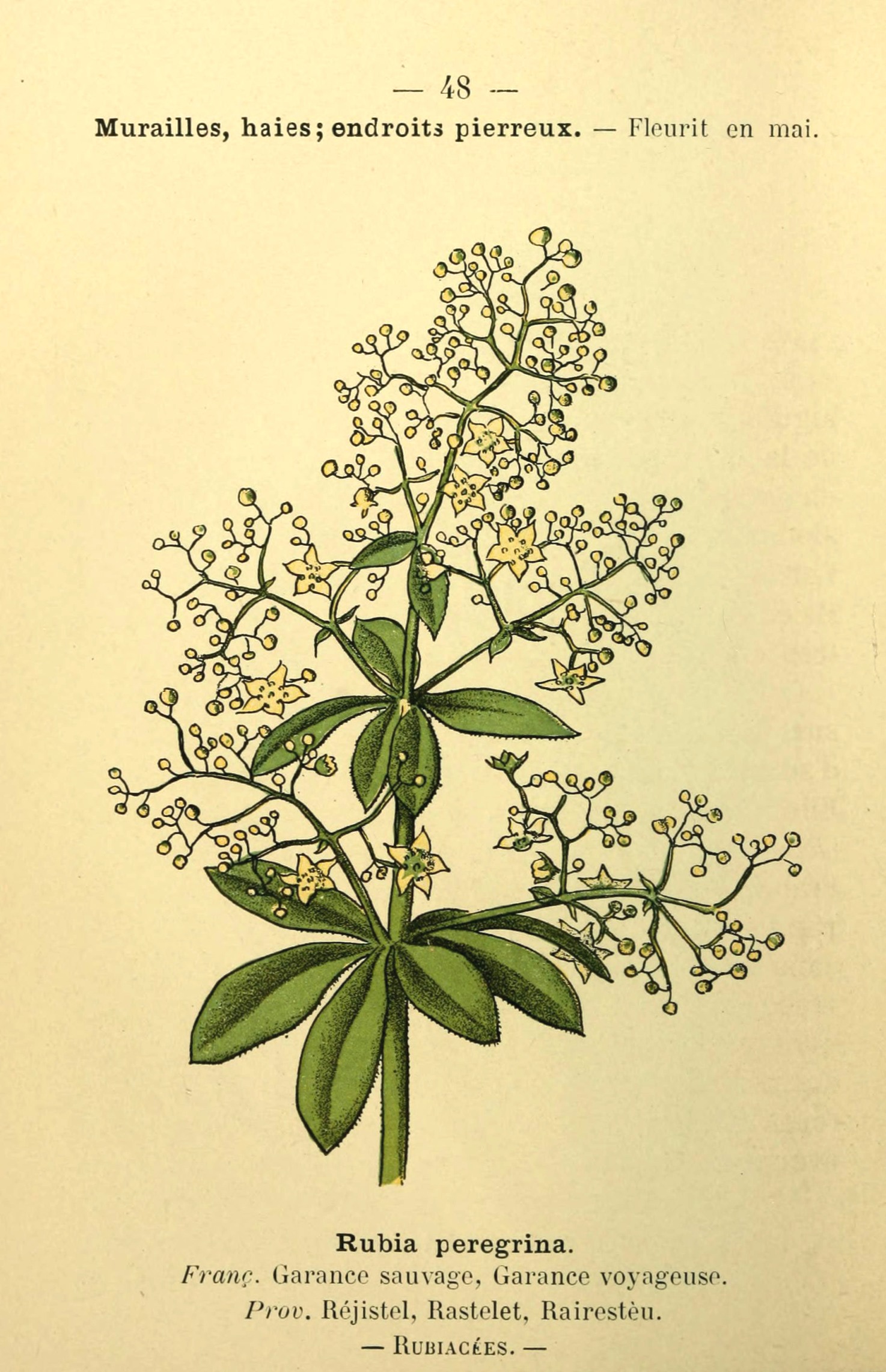 Description –
Rubia peregrina is a perennial lianosa herbaceous species that can develop between 50 and 250 cm in length; it is covered with short spines so it is rough to the touch.
The stems are climbing, branching, of quadrangular section, with edges of 1-2 mm. The leaves are with a single rib clearly visible on the lower page, arranged in whorls of 6 elements; they are leathery, persistent, elliptical-lanceolate, with a glossy green color.
The flowers are pentamers, small, numerous, white yellowish, arranged in panicles at the base of the leaves or at the ends of the branches. The anthesis is between April and July.
The fleshy schizocarpical fruit is a drupario, in which develops a single globose 3-7 mm monocarp, first green and then black and glossy, similar to a berry with a pedicel of 2-6 mm.

Cultivation –
For the cultivation of the Rubia peregrina it is necessary to choose deep, permeable and fresh soils, in order to allow the roots (part from which the pigment is extracted) to develop better in length and thickness.
This plant can be sown or reproduced by cutting the root.
For sowing, work is carried out in the open in the spring, in the period from March to May, sheltered from frost, at a depth of 4-6 cm, with an interval of 3 to 6 cm, leaving a meter between one row and the other and a half away, to facilitate subsequent collection.
The time of germination occurs after about 15-20 days.
It can also be sown in greenhouses with transplantation of the seedlings of 6-8 months of life.
If you want to reproduce by cutting you need to prepare small pieces of root from seedlings born in the greenhouse.
To obtain the dye it is necessary to wait two to three years because the root matures the dyeing principle in this period and in the meantime it needs a fertile and well-watered soil.
While waiting for this period, the seeds can be picked, which must be removed from the plant once it has reached full maturity and dried in the sun.
The roots are harvested in the September-November period, during the third year of cultivation, when the plant reaches its maximum coloring power. They must be dried in the sun, after having freed them from the earth, without washing them.

Uses and Traditions –
The madder has been the main source, since ancient times, of the red color for textile fibers, skins and wall paintings. This plant is mentioned in the works of Hippocrates, Theophrastus and Dioscorides, which mentions its cultivation in Tuscany; it was also used by the ancient Egyptians for dyeing linen.
To be precise, there were some plants from which the red pigment was obtained, namely: mainly the Rubia tinctorum and the Rubia peregrina, as well as Asperula tinctoria and some species of gallium.
From the Middle Ages onwards, until the corresponding synthetic pigment was produced, the pigmenting substances produced by the plant constituted the reason for vast cultivations and rich commerce.
Beginning in the seventeenth century, its roots began to be imported into Europe from Syria, Persia, Asia Minor and Greece, from Syria, by the Dutch, themselves great producers along with France, where it was introduced in the days of Louis XV and later intensively cultivated in some southern regions, including Provence.
In Italy the cultivation of madder was maintained until the end of the nineteenth century, characterizing with the red brick color that, together with the blue of the ford, the coloring of the local popular fabric is obtained, especially in traditional regional clothes.
The rapid decline of madder occurred with the identification of its coloring principle, which is an anthracene compound, called alizarin, synthesized in 1868 by German chemists Groebe and Liebermann.
The berries of this plant, which ripen in the autumn, are not edible.
Madder also has diuretic, emmenagogue, laxative and tonic properties.

Preparation Mode –
The procedure suitable for dyeing in red with madder root on wool or cotton consists in pretreating the wool by making it simmer for an hour in water in which potassium alum has been dissolved (available in pharmacies). The amount of alum (used at 25%) is to be calculated on the weight of the material to be dyed; for example, 100 grams of wool requires 25 grams of alum. Allow the material to cool in the bathroom.
If you want to dye the cotton instead, you need to calculate 20% of potassium alum and 5% of Solvay soda (available in supermarket detergents) on the weight of the dry material and proceed as above.
You need to get some wild or cultivated madder root (harvested and dried or purchased in herbal medicine, possibly powdered) and proceed with dyeing by immersing the material in water to which the madder has been added.
At this point we must bring the dyeing bath to 85 ° and keep the temperature for an hour, stirring often to obtain a uniform dye.
Then let it cool in the bath, wash in water and neutral soap, rinse, centrifuge and dry in the shade.
In the case in which the root is used in pieces, it is first necessary to extract the color by soaking it in water for a few hours and then at 85 ° an hour, then let it cool and filter.