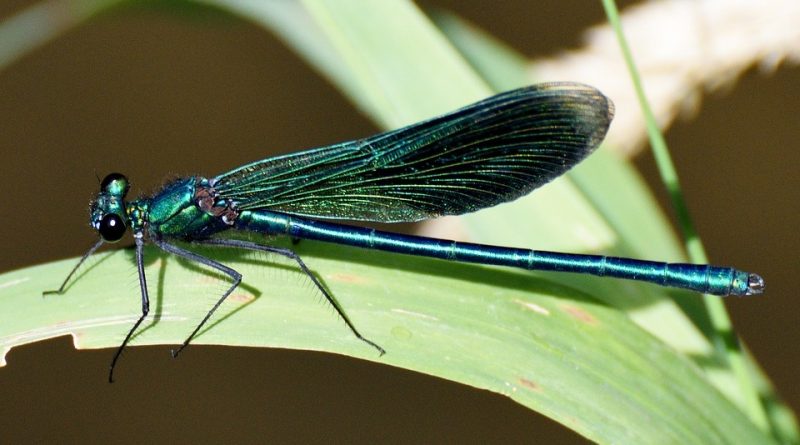 The beautiful demoiselle (Calopteryx virgo Linnaeus, 1758) is an insect belonging to the Calopterygidae family.

Geographical Distribution and Habitat –
Calopteryx virgo is a species with a distribution in the European continent with a diffusion limit corresponding to the Scandinavian peninsula (Sweden, Finland) and is present, as a southern limit, up to a small area of ​​Mediterranean Morocco.
In Italy it is present in all regions, especially in low mountain areas, up to 1,258 m, with the exception of Sardinia and Puglia and almost certainly also for Sicily.
The habitat of this insect is represented by areas with the presence of running water mirrors, with a clear preference for small forest areas, fresh or cold, shady and well oxygenated, where it is seen flying from May to October.

Morphology –
The beautiful demoiselle, in the adult state, is recognized for its elegant livery, with different metallic colors in the two sexes.
The male has brown wings and a metallic blue body, which also extends to some longitudinal ribs. The female has brown wings and a greenish-brown body with iridescent reflections.
The head is dicoptic and the front wings are equal in shape and development to the rear ones. In rest position they are mutually juxtaposed and vertical seals.
The larvae are provided with three caudal respiratory lobes.

Attitude and biological cycle –
The adults of this dragonfly appear since early May, with flickering that can continue until the end of August, and with an average life of about a month.
Once sexual maturity is reached, which occurs in a fortnight, the males occupy a well-defined territory, within which the mating takes place.
Females lay inside stems of aquatic plants.
The insect winters at the young stage and the development cycle normally lasts two years.
Calopteryx virgo is a zoophagous species whose young individuals prey on the larvae of insects, small fish and other animals, while adults capture various insects in flight.

Ecological Role –
Calopteryx virgo is a mediocre flyer in habitats mainly associated with running waters where it frequents watercourses and canals in which it is found numerous.
However, it is also possible to observe isolated individuals even away from water, in clearings and in the woods.
Despite the decrease, the destruction of some habitats and the pollution of the waters, this species is not, at the moment, particularly threatened.
However, local extinction phenomena are documented in areas subjected to intensive fruit-growing practices.
Therefore, specific conservation measures are not currently in place, and are not currently considered necessary, apart from a general protection of habitats.