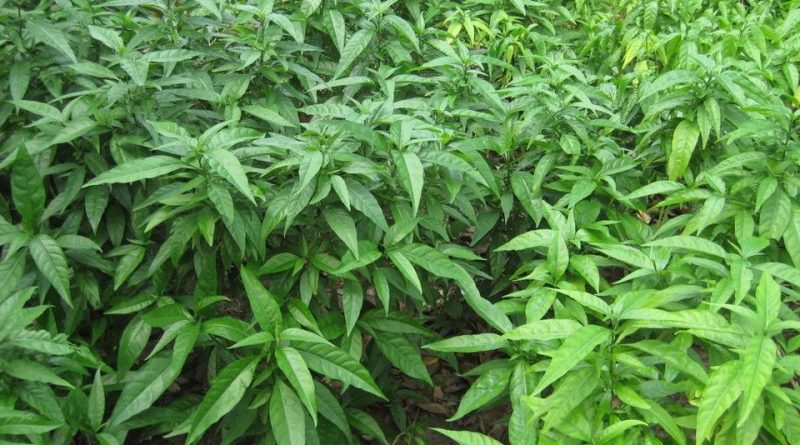 Systematics –
From the systematic point of view it belongs to the Eukaryota Domain, Kingdom Plantae, Sub-Trinchebionta Subdivision, Spermatophyta Superdivision, Magnoliophyta Division, Magnoliopsida Class, Asteridae Subclass, Order Scrophulariales, Acanthaceae Family, Tribe Justicieae and then to the genus Pseuderanthemum and to the Species P. palatiferum.
The term is synonymous: Eranthemum palatiferum Nees.

Etymology –
The term Pseuderanthemum comes from the union of three Greek words: pseudo (= false), éros (= love) and ánthemon (= flower), that is “false flower of love” or even “false spring flower”.
The term palatiferum is not known.

Geographical Distribution and Habitat –
Hoan-Ngoc is a very widespread plant in Vietnam with habitats typically characterized by warm humid tropical climates that are adapted to a cosmopolitan level even in temperate climates. 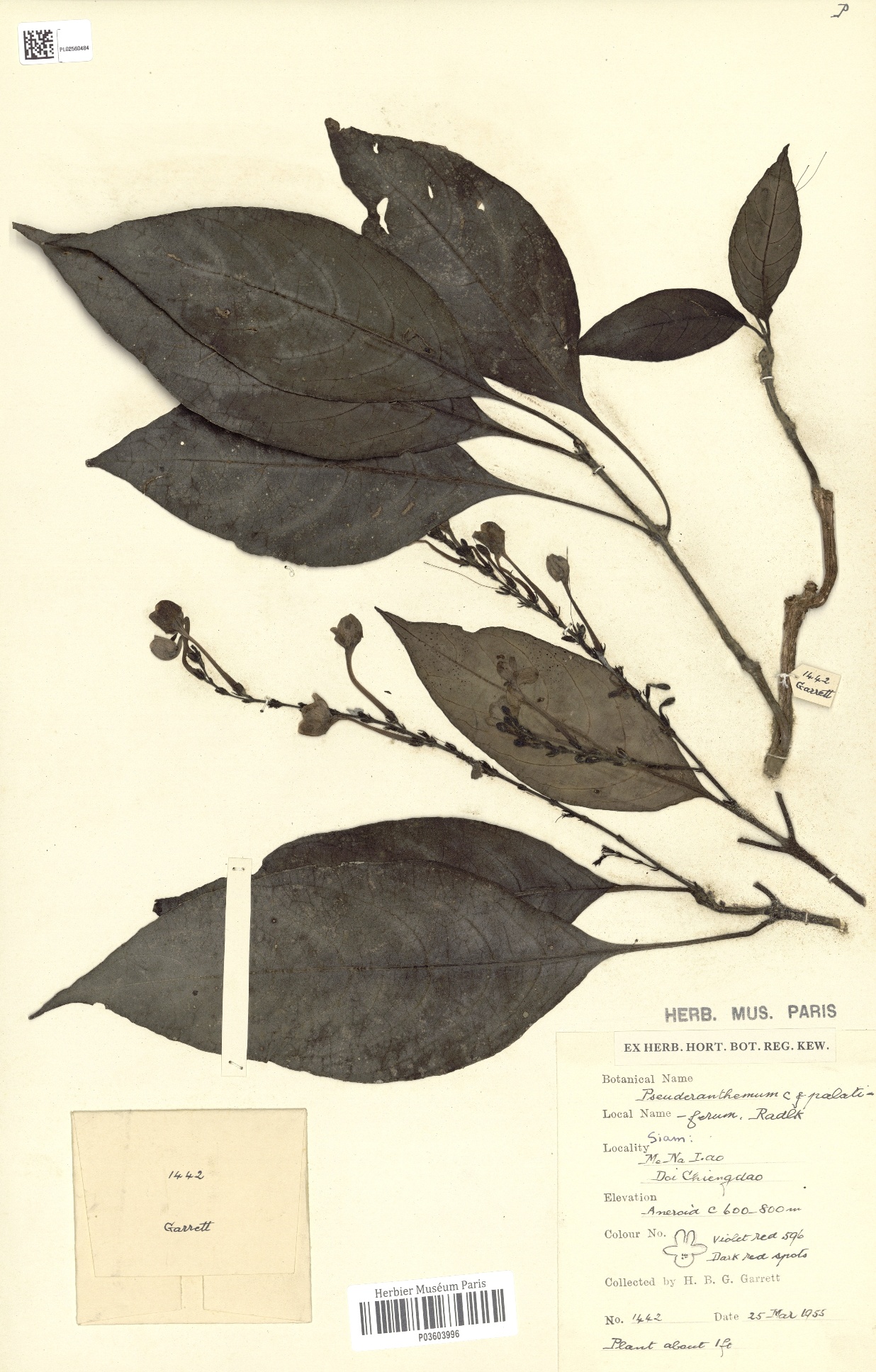 Description –
Hoan-Ngoc is a semi-bushy plant 1 to 2 meters tall, perennial with leaves arranged along the caulea in the opposite way.
The leaves have sessile lamina, elliptic with slightly sinuous margins.
The inflorescences are terminals of the dicasio type with few flowers positioned on the axils of the upper leaves.
The cup is gamosepalo, the corolla is gamopetala.
The fruits are capsules, also tomentose or woody, with a sterile basal stem and a slightly clavate fertile head. Each capsule contains 2 – 4 seeds.
In the various vegetative parts there are phenolic glycosides often in iridoid compounds, alkaloids and diterpenoids; there are also cistolites.

Cultivation –
Pseuderanthemum palatiferum is a plant that is pollinated by insects (entomogamous pollination) such as bees, wasps, moths and butterflies, while in the tropics also through birds such as hummingbirds (ornithogam pollination).
The falling seeds (after having possibly walked a few meters due to the wind – anemocorous dispersion) on the ground are dispersed above all by insect-like insects (mirmecoria dissemination). Dispersions through animals are also possible (dissemination zoocora).
For the cultivation it needs very fertile, well-drained soils with the presence of water.
This plant can be grown in pots and soil using a soil rich in organic matter. Under weather conditions, cast and with partial shade grows rapidly. The Hoan Ngoc can grow up to 2 meters.
The plant can die when temperatures drop below 5 ° C and it rejects when spring arrives.
It is advisable to water it 3 times a week and in any case only when the soil dries; moreover it is necessary to avoid getting water directly on the leaves.
It can be reproduced by cutting cuttings of 10-12 cm, in a wet substrate and kept shaded.
In the open field it can be cultivated in rows.

Uses and Traditions –
Hoan-Ngoc is a valuable traditional medicinal herb found in Southeast Asia, especially in Vietnam. The plant is also used in traditional Thai-based medicines. Its vernacular names are xuan-hoa or hoan-ngoc in Vietnam and phaya wanon in Thailand.
Known traditional uses are for the treatment of arthritis, trauma, hemorrhoids, stomach pain, hypertension or hypertension, kidney diseases including nephritis, various cancers, diarrhea and colitis. The leaves are also used to treat animal diseases such as diarrhea in dogs and pigs and cholera in ducks and chickens.
The function and value of this plant on human health have long been demonstrated by real cases and recognized by contemporary scientists for its healing effects on intestinal diseases, mental disorders, detoxification, antibacterials and others. The wonderful corrective and regulatory effect of Hoan Ngoc derives from its chemical properties: once taken, the medicinal herb acts as internal acupuncture.
According to a study by the Institute of Chemistry of the Academy of Sciences and Technology of Vietnam, the extracts of the roots of Hoan Ngoc contain biologically active substances of high value such as lupeol, lupenone, betulin, pomolic acid, composed of platylignan, etc. studied and produced by scientists from around the world to treat 25 known diseases, including serious ones.
Pseuderanthemum palatiferum has a protein content of 30.6% on the total dry matter. The main amino acids are:
– lysine, metion and threonine which constitute 30.6%, 20.7% and 61.0% mg / 100 g of fresh leaves, respectively.
The leaves contain β-sitosterol, stigmasterol, kaempferol 3 – methyl ether 7 – O – β – glucosides, apigenin 7 – O – β – glucoside, lipids and saponin.
According to some studies this plant would be useful in fighting Alzheimer’s disease which is the main cause of dementia in the elderly.
As is known, acetylcholine (ACh) is a key neurotransmitter in the brain’s chemical messaging system. It is especially important for memory creation. Acetylcholinesterase (AChE) is an enzyme that hydrolyses acetylcholine in central and peripheral cholinergic synapses of the brain. The products are choline and acetic acid.
When ACh is no longer produced, people with Alzheimer’s disease are unable to remember anything. AChE inhibitor drugs have been designed to inhibit ACh breakdown in the brain. This helps to increase the activity of cholinergic neurotransmitters in patients with AD. Drugs to inhibit AChE are increasingly expensive to produce but there are possibilities to use plant-based drugs.
A study in rats shows that an extract of water from the leaf could reduce AChE activity that could suggest some pharmacological benefits in this regard.
Other interesting effects of this plant are in regards to the blood pressure of inflammatory states, in diabetes and in cases of lymphatic cancer. Obviously, every study on the subject and the basis of much research worldwide.

Preparation Mode –
A practical use of this plant is to take 5-6 leaves, to be washed well and mixed with salads or with fruit as in smoothies.
The amount used can vary according to the size of the body and for a better result it is advisable to eat or take it on an empty stomach twice a day for at least 3 weeks to two months.
Also to strengthen the immune system, it is advised to eat fresh leaves to get the maximum benefit to relieve heartburn or due to chemotherapy or radiation treatments.